Across the Finish Line: After passing the House last Friday, the Inflation Reduction Act was swiftly signed into law by President Biden yesterday. This historic legislation will invest $750 billion into climate, energy and health care over the next decade. While concerns remain over fossil fuel provisions, the bill represents the first-ever major climate legislation to be passed by Congress, a huge win for the battle against climate change. 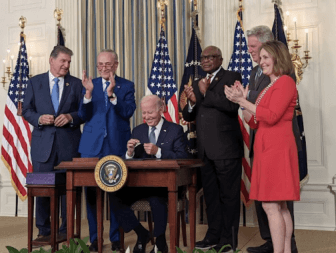 River Rouge Oil Spill: Last weekend, a 55-gallon drum containing used oil overturned in the Rouge River near Wayne, MI, resulting in an oil sheen being reported to authorities who used booms to contain the contamination. The oil spill is yet another example of the danger crude oil poses to Michigan’s waterways, underscoring the importance of protecting our Great Lakes from Line 5.

Huron River Health: In a bit of good news, Michigan health officials reported late last week that the Huron River is once again safe for human contact after Tribar Manufacturing spilled hexavalent chromium into the river on August 2. After initial reports indicated thousands of pounds of hexavalent chromium had entered the river, investigators concluded that only about 20 pounds of the chemical made its way downstream.

In past issues of Washington Weekly we have discussed how volatile fossil fuel prices contribute to inflation and how clean energy is more reliable, stable and cheaper. However, climate change itself is also fueling inflation and increasing prices by destabilizing trade routes, creating supply chain blockages and shortages of certain goods.

After a summer of intense heat waves, iconic European rivers like the French Loir and the German Rhine rivers are becoming too thin, stopping ships carrying goods from passing through. In the U.S, the federal government announced cuts to the amount of water states can withdraw from the Colorado river, after two decades of a megadrought driven by the climate crisis has brought water levels in reservoirs to dangerously low levels. 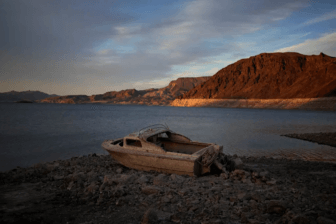 When water levels become low, the ripple effects actually grow larger. Shipping delays drive up costs for consumers by reducing the supply of goods. Food prices have continued to increase around the world as heat wave after heat wave have reduced crop yields. Many countries like India and Malaysia are issuing crop export bans in response to domestic hunger crises, which in turn continue to drive up prices on the world market.

The rising global temperatures are making our farming and food systems more difficult and expensive here in Michigan, too. We love our potato chips here in Michigan, and about 25% of the country’s chips start with Michigan potatoes. But potato growers in Michigan are already having to spend precious dollars on new refrigeration for their crop storage warehouses to prevent potato rot. As the time period with outdoor air cool enough to store potatoes in Michigan continues to shrink, those costs will continue to rise, and those expenses will be passed along to potato chip lovers everywhere.

While we are certainly feeling the impact of increased food prices at the grocery store, it is the world’s poorest that face the worst of the burden. An estimated 71.5 million people worldwide have been plunged into poverty as a result of increasing food prices.

As the 2022 November election draws closer, Michigan LCV remains focused on achieving a conservation majority in Lansing. This is a pivotal election year that will set the political landscape in Michigan for the next several years and dictate our ability to facilitate meaningful climate action at the state level to go hand in hand with the climate provisions spelled out in the Inflation Reduction Act.

With a huge portion of our organization’s work centered on electing environmental champions to office, Michigan LCV yesterday rolled out the first part of our third round of endorsements for the 2022 election. You can read our press release here. 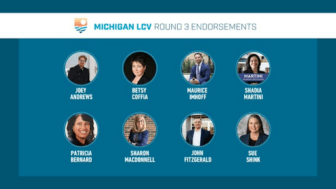 Michigan LCV is selective when it comes to who we endorse. Through a thorough vetting process, our endorsements are only offered to candidates who demonstrate a strong commitment to protecting the health of Michigan’s communities and democracy, which includes, but is not limited to: cleaning up toxic contamination in water, addressing the climate crisis, protecting our natural resources, tackling inequities in communities disproportionately affected by air quality issues and access to clean water, and supporting policies that ensure fair and equal access to the ballot.

Michigan LCV added the following candidates to their list of endorsements:

To see the full list of endorsements, please visit our 2022 Endorsements webpage.