Coal Plant Crackdown: Last week, the Environmental Protection Agency (EPA) announced a lawsuit against the EES Coke Battery plant situated on Zug Island in the Detroit River for allegedly violating the Clean Air Act. The plant – which is owned by a subsidiary of DTE Energy – produces a material called coke used in steel manufacturing, but emits dangerous amounts of sulfur dioxide into the air, impacting the health and safety of communities in River Rouge and southwest Detroit.

Rethinking Reconciliation: Sen. Joe Manchin’s bipartisan energy conversations with Republican Senators are seemingly over, opening the door for the West Virginia Senator who stood in the way of President Biden’s climate agenda to make a reconciliation deal with Senate Majority Leader Chuck Schumer. Although nothing is certain, recent developments are a hopeful sign and could lead to a climate and energy deal that would help tackle the climate crisis.

Biden’s Clean Energy Breakthrough: The White House announced Monday a series of executive actions that activists have been pushing for to boost clean energy manufacturing as congressional action has stalled. The Biden administration is temporarily suspending solar tariffs for two years as a Commerce Department probe has halted new development. Additionally, President Biden authorized the use of the Defense Production Act to spur clean energy development from solar panels to heat pumps and electrolyzers which is expected to double current solar capacity by 2030.

Lead in drinking water continues to be a massive problem within communities in Michigan. That’s especially true in Black and Brown communities that had their voices taken away from them during state-imposed emergency management systems. Michigan LCV’s Hudson Villeneuve joined the office of Representative Rashida Tlaib and many other partners for a two-day Congressional “Get-the-Lead-Out” tour to visit several cities dealing with lead in drinking water and explore the issues surrounding emergency management policies and other factors. 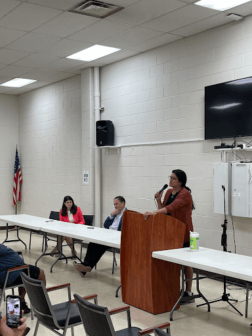 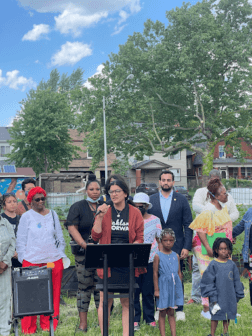 The goal of the emergency managers was to deal with financial trouble cities had and that meant selling off public services to private companies or shutting off services altogether. Detroit, Flint, Highland Park, Benton Harbor and Pontiac have all had emergency managers making decisions – in uniform and undemocratic ways – for communities of color. Not coincidentally, these cities have dealt with persistent lead problems.

Through the “Get the Lead Out” tour, Michigan LCV was proud to support the office of Rep. Tlaib and The People’s Water Board in bringing attention to the continued poisoning of communities and released the following statement:

Our drinking water infrastructure is outdated, and the negative impacts are disproportionately impacting communities of color. It is imperative that congress deliver the full funding needed to remove every lead service line in the country and establish clean drinking water as a human right,” said Hudson Villeneuve, Federal Government Affairs Coordinator for the Michigan League of Conservation Voters. “As a state that is home to 20% of the world’s fresh surface water, Michigan should be leading the charge on solving our country’s lead problem. We are proud to stand with leaders and organizations that are working toward a long term solution so all Michiganders can have clean, safe lead-free water.”

On the federal level, the Infrastructure Investments and Jobs Act delivered a much-needed $15 billion to remove lead service lines nationwide, while here in Michigan, the historic $4.8 billion investment in water infrastructure via the bipartisan Senate Bill 565 passed earlier this year allocated $138.8 million to replace lead service lines, including $45 million in Benton Harbor and $75 million in Detroit. Additionally, there is legislation expected to move soon in the Michigan State Senate that will provide stronger direction to install water filters in schools (known as the “Filter First” approach).

These investments, however, fall alarmingly short of the $45-60 billion needed to eliminate all lead service lines across the country. And yet, these statistics and missing funds do not tell the full story, and hearing from impacted residents on the tour painted a clearer picture about the ongoing crisis.

At Hamtramck High School, we heard the stories of students who had to test their water for lead and other contaminants with help from their science teacher. For many of the students, this was the first time they knew lead was in their drinking water, due in part because of language barriers, lack of technical assistance, and other challenges with notification.

Hamtramck is a diverse but low-income community where many first generation immigrants from Bangladesh and Yemen do not speak English. A six-page document with information about the contamination was rubber banded to the doors of residents, but many could not understand the overly-technical document, and when assistance in the form of filters was sent to Hamtramck, the filters did not fit the faucets. Today, students are still frightened about what they are drinking and how it may affect their health. 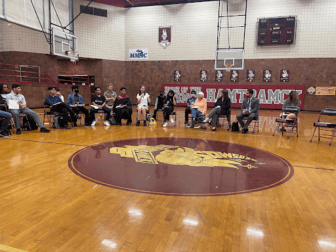 When high school students are needed to do the testing to make sure their town’s drinking water is safe, it demonstrates a moral gap in our societal priorities when clean water cannot even be guaranteed for our youth. We need the federal government to step up with more investment to address lead, starting with the communities that are feeling the impacts the most.

Michigan LCV is committed to bringing these stories to halls of power and fighting until clean drinking water is human right for all.

The conference offered our team a chance to have one-on-one conversations with policymakers about the issues that matter most to the protection of our air, land, water, public health, democracy, and climate, as well as attend some fundraising events for environmental champions.

For a detailed look at our team’s week on Mackinac Island, check out this week’s edition of the Capital Catch-Up, our newsletter focused on environmental legislative action in Lansing.

Tomorrow, members of the Michigan LCV team will be in Traverse City for the Michigan Climate & Clean Energy Summit! Our team is excited to participate in this important event that will feature keynote speakers Dr. Jonathan Overpeck and Marnese Jackson, as well as several panels on the importance of state-level climate action.

Although in-person tickets are sold out for the summit, there is a free Zoom link that you can use to attend the event virtually and hear from the keynote speakers, as well as some Michigan LCV teammates!

You can register to attend virtually here.