This is Not a Drill: Late in the day on Friday before the holiday weekend, the U.S. Department of the Interior released a proposed plan for offshore drilling lease sales for the years 2023-2028. The plan proposes 11 lease sales in those 5 years, 10 in the Gulf of Mexico and 1 in Cook Inlet in Alaska (the plan will be finalized in early 2023). As Interior opens up a public comment period on the plan, the Biden Administration should expect to hear from Americans that new offshore drilling leases lock our country into fossil fuels for decades to come, and Interior should finalize a plan that includes no lease sales.

The Future of Climate Action After West Virginia v. EPA: Last week the Supreme Court released a decision on West Virginia v. EPA that limits the Environmental Protection Agency’s Clean Air Act authority to regulate carbon pollution (MLCV statement here). Despite this step backwards, EPA does still have options to reduce greenhouse gas emissions, and as this Washington Post analysis illustrates, the decision makes climate action at the local and state level (and of course by Congress) all the more important.

What’s on the Menu for the Next SCOTUS Term?

The Supreme Court is on a break, and will pick back up in the fall – this time with a new justice, Justice Ketanji Brown Jackson, who was sworn in last Thursday. Unfortunately, SCOTUS also announced that it would hear the case Moore v. Harper, which could completely upend our Democracy, as a decision could grant state legislatures unprecedented power over federal elections.

Not gonna sugarcoat it – the decisions coming out of the last term of the Supreme Court of the United States (SCOTUS) were hugely consequential and devastating for many, many people (and the planet). The scariest part may be that this Court – more specifically the 6 conservative justices – is just getting started.

The most frightening decision of the near future may be from Moore v. Harper, which SCOTUS announced they would hear during the next term starting in October. Under a very plausible scenario, SCOTUS could rule that state legislatures (most of them highly gerrymandered around the country) would have ultimate authority over election rules – a legal theory known as the “independent state legislature doctrine.” 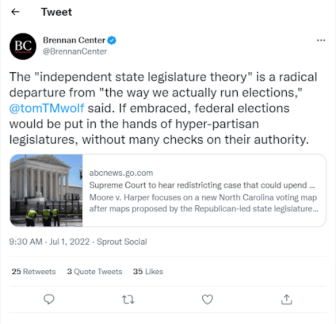 In other words, the Governor, Secretary of State, Michigan Supreme Court, and other members of the state executive and judicial branches could be cut out entirely from the process to set election rules. Under the most extreme version of this doctrine, this could mean that the MI Supreme Court can never strike down an election law, or that Governor Whitmer (or whoever was Governor) could never veto an election bill.

Similar to other major decisions recently, a decision that concentrates all of this election power in state legislative hands upends SCOTUS precedence and U.S. history. The three liberal justices and Chief Justice John Roberts have signaled they would not undo precedent that soundly rejects the independent state legislature doctrine, but it won’t be enough to overcome 5 conservatives voting together. Four justices (Gorsuch, Thomas, Alito, and Kavanaugh) already support some version of the doctrine, meaning that the tie-breaker vote will likely come down to Justice Amy Coney Barrett.

On a more positive note, we will see new Justice Ketanji Brown Jackson in action during the October term. As the first Black woman and first public defender on the Supreme Court, her perspective and voice will be critical to shining a light on this attempt to undermine Democracy. 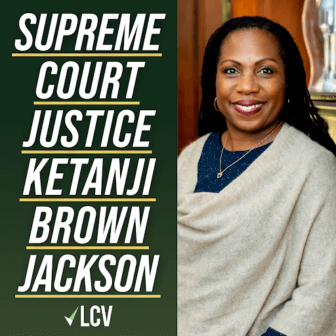 With all that’s at stake, Moore v. Harper is so consequential that it is very daunting to think about how to blunt its impact. Protecting voting rights, and advocating for fair and free elections, still matters at all levels. For ideas on voting rights actions you can take, check out a recent edition of our Democracy Drumbeat to do things like signing up to volunteer as a nonpartisan election challenger and plugging in to efforts to boost voting information (know your rights!) and increase voter turnout.

As noted above, the Supreme Court has dealt several major blows to the federal government’s power to take action on a number of issues.

The Michigan LCV Team understands that the November Election is going to have significant consequences for continuation of progress on cleaning up our air and water, protecting public health and defending our Democracy.

Re-electing our leaders at the top of the ticket – Governor Whitmer, Attorney General Nessel and Secretary of State Benson – is paramount. We also know that with the newly drawn districts in Michigan, there are significant opportunities to elect environmental champions down ballot in State House and Senate races as well.

We have issued two rounds of endorsements so far for State House and Senate candidates, you can view all of our current endorsements and be on the lookout for future endorsements at michiganlcv.org/elections/endorsements-2022/. We have a robust endorsement process that includes candidate questionnaires and interviews to assess track-records and commitment to our issues.

And we have already been out in the field, canvassing with endorsed candidates and having conversations with constituents about issues impacting our air, land, water, health and democracy. 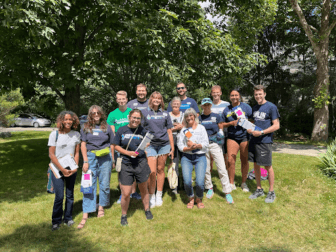 The Michigan LCV team at Monday’s canvass for Jennifer Conlin in Washtenaw County!

On Monday, the Michigan LCV team went out in full force to knock on doors for Michigan State House candidate Jennifer Conlin.  Jennifer is running in Michigan’s newly drawn House District 48, which runs from Ann Arbor north into the Brighton/Pinkney/Howell area. It’s a real 50/50 district.  Jennifer – who was born and raised in the district – is deeply dedicated to the protection of our natural resources and community health. 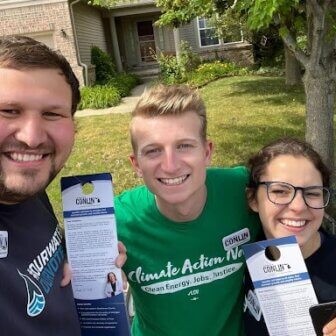 I’ll leave you with this closing thought. While we have seen major setbacks on progress at the federal level over the past weeks, the Michigan LCV Team is more determined than ever. We will be working day-in and day-out to secure wins at the local, state and federal levels heading into November, and we invite you to join us in this fight. You can always visit our website for ways to take action, stay updated and get involved.