Federal Climate Action: With the spotlight on recent negotiations between Senate Majority Leader Chuck Schumer and Sen. Joe Manchin, Democrats are hopeful that a deal can be reached to push a modified reconciliation climate, tax, and prescription drug package through Congress this month.

Rising Cost of Toxicity: Toxic algae blooms have been a problem in the Great Lakes – particularly Lake Erie – since 2014, threatening human health and the health of the lakes while closing down beaches and recreation opportunities. Now, however, the cost of water is rising and the lack of protections for our water against contamination is impacting wallets to the tune of $100 per family per year. 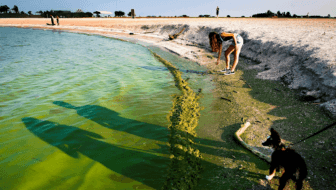 Fossil Fuel Addiction: In a controversial step last Friday, the U.S. Department of Interior released a draft version of an environmental impact statement for the proposed ConocoPhillips oil drilling project in Alaska’s North Slope. While nothing is final, the move is cause for concern and would release hundreds of millions of metric tons of carbon dioxide and cripple the Biden administration’s climate goals.

A few weeks ago we covered breaking news related to alarming new health advisories from the Environmental Protection Agency (EPA) related to PFAS chemicals – a family of thousands of so-called “forever chemicals” found in countless products and in our water around the world. 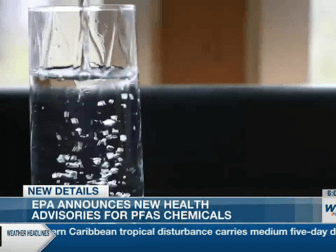 These new health advisories follow the science by instating (new and revised) advisory levels that show there is no safe amount of exposure to certain kinds of PFAS. In fact, testing technology can’t even measure the tiny amounts of chemicals that pose immense danger to human health.

The EPA’s recent action is integral to addressing the PFAS crisis, providing revised guidance to public health officials and other decision makers. While not binding, they pave the way for strong regulatory actions that have been laid out in the Biden Administration’s PFAS roadmap, such as drinking water standards that states and communities would need to follow and enforce.

The advisory levels prove the point that PFAS contamination is doing harm and needs to be addressed. PFAS polluters, many of whom knew about the dangers of PFAS for decades, must be held accountable to step up their cleanup efforts, be more transparent with the public, and stop using PFAS chemicals completely.

One of those major polluters is the United States Department of Defense, responsible for widespread PFAS contamination at hundreds of former and current military sites in all 50 states, leaving taxpayers holding the bill for billions of dollars (and likely hundreds of billions of dollars) in legal liabilities.

A map of the 679 military sites in the U.S. with known or suspected PFAS contamination (Credit: Environmental Working Group).

Michigan LCV is actively supporting impacted community leaders grappling with contamination from military bases in a number of ways, including through our work with the Great Lakes PFAS Action Network (GLPAN), connecting them to key Biden Administration officials, and writing and advancing key legislative solutions through Congress.

While much work remains to be done, here in Michigan we should be proud of several of our Michigan congressional members who have been responding.

Here are some recent examples of action from the Michigan congressional delegation:

Michigan LCV, along with our partners in the Great Lakes PFAS Action Network, is playing a key role in supporting these efforts and standing with impacted communities. It’s clear there is momentum and a stronger sense of urgency than ever before – a testament to the power of consistent, persistent advocacy.

In the wake of the Supreme Court’s dangerous ruling in the case of West Virginia v. EPA last month that hamstrings the agency’s regulatory authority over carbon emissions, the League of Conservation Voters signed on to a joint statement with other prominent environmental organizations that calls on the U.S. Senate to confirm David Uhlmann as the permanent head of the EPA’s enforcement office. Along with LCV, the group includes the Environmental Defense Fund, Earthjustice, the National Wildlife Federation, and the Natural Resources Defense Fund.

You can read about that joint statement via the Washington Post here, and read more about the importance of confirming Uhlmann in a group sign-on letter (signed by Michigan LCV) here. 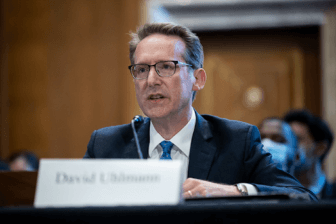 Uhlmann testifying during his confirmation hearing in 2021 (Credit: E&E News).

Uhlmann, a former federal prosecutor and environmental law professor at the University of Michigan (and a friend of Michigan LCV), was nominated to lead the agency’s Office of Enforcement and Compliance Assurance by President Biden more than a year ago but has not been confirmed by the Senate.

While Senate Majority Leader Chuck Schumer recently tested positive for COVID-19, delaying any potential Senate confirmation process, the confirmation of Uhlmann is vitally important to the federal government’s ability to fight climate change, especially given the West Virginia v. EPA decision. Along with LCV, the Michigan LCV team has joined the chorus of voices calling for a swift Senate confirmation of Uhlmann to ensure the EPA does not lose all of its authority to protect our environment, climate, and our future.