Danger, Will Robinson: Last Thursday, an incident at Algoma Steel resulted in 5,300 gallons of oil spilling into the St. Marys River near the Soo Locks, a waterway that connects Lake Superior and Lake Huron and serves as a border between the United States and Canada. Unfortunately, there’s more. This afternoon, EGLE’s emergency response team responded to another oil spill in the Flint River. Details about this spill are still to come, but it is estimated thousands of gallons of an oily substance were spilled into the river, spanning 5 miles. These oil spills clearly illustrate the immense danger that Enbridge’s Line 5 pipeline poses to the Great Lakes, drinking water, and Michigan’s economy. They also come on the heels of the release of expert findings that revealed significant flaws in Enbridge’s reasoning for keeping Line 5 open, including impacts to gas prices.

January 6 Committee: Last week, the House “January 6” select committee held its first of several public hearings as part of the investigation into the January 6, 2021, attack on the US Capitol. With a second hearing held on Monday and more expected in the coming weeks, the committee’s investigation is shedding new light on what happened that day, as well as showing new evidence of former President Donald Trump’s actions in fueling the spread of the debunked “Big Lie” conspiracy that the election was stolen, and has the potential to shift public opinion and the future of American democracy.

Following the Science on PFAS: Earlier today the Environmental Protection Agency (EPA) announced new, more protective drinking water advisory levels for PFOA and PFOS and set final health advisories for GenX and PFBS, four PFAS chemicals that are commonly used in a variety of products and industrial uses and threaten the public’s health. The new advisory levels follow the latest scientific research and will set a strong baseline for monitoring drinking water for these chemicals, providing critical guidance to decision-makers to better protect communities’ health.

High Heat, But No Spice: Huy Fong Inc., the producer of Sriracha, announced a temporary suspension of sales of its popular hot sauce as the historic “mega drought” in western U.S. states is causing a chili pepper shortage. With the company’s supply of peppers coming from this region, the impending Sriracha shortage is one of many similar supply chain conundrums that climate change is likely to make worse in the near future. Unfortunately, it might be time to prepare for mild, bland eggs, or whatever you like to douse in Sriracha.

The two recent oil spills in the St. Marys River near the Soo Locks and the Flint River are the latest and most alarming warning signs of the dangers of Line 5.

The 69-year-old Line 5 pipeline running across the Straits is well past its expiration date and has been subject to multiple near-catastrophic anchor strikes. Meanwhile, Enbridge Energy – the Canadian oil company that owns and operates Line 5 – has demonstrated a complete disregard for pipeline maintenance and the health of our Great Lakes.

Enbridge is the same company responsible for the 2010 Kalamazoo River oil spill, one of the most catastrophic inland oil spills in U.S. history. Because of the company’s negligence in maintaining pipeline safety, upwards of a million gallons of oil caused irreversible damage to the Kalamazoo River watershed, ecosystem, and surrounding communities.

While Enbridge was not responsible, these recent spills are certainly a wake up call. If Line 5 were to rupture, the damage would make the 5,300 gallons of oil that entered the St. Marys River look like a drop in the bucket. Because of its location in the Straits of Mackinac, a Line 5 oil spill would impact more than 700 miles of Great Lakes coastline, contaminate the drinking water of hundreds of thousands of Michiganders, and devastate Michigan’s tourism and fishing economies, altering our way of life forever.

As the fight to shut down Line 5 continues in the courts, the release last week of expert findings revealed significant flaws in Enbridge’s reasoning for keeping Line 5 open, including research from Enbridge’s own experts that shows a closure of the pipeline would have negligible impacts on gas prices. The new findings were revealed through a lawsuit filed by the Bad River Band of the Lake Superior Tribe of Chippewa Indians. They show that energy price increases in Michigan and Wisconsin likely would be less than one cent per gallon. Not only does this show we can do without Line 5, but also that Enbridge’s arguments for keeping oil flowing through the pipeline – and through the Great Lakes – have consistently been misleading, overstated, and exaggerated.

Between Enbridge’s track record of prioritizing profits above all else and this week’s oil spills, it is clear that shutting down Line 5 for good is of utmost importance.

Gas prices continue to reach record highs, averaging over $5 dollars a gallon nationwide for the first time ever. The price at the pump is painful for working families, particularly low income folks who spend a higher percentage of their income on transportation than their wealthier counterparts.

High gas prices hurt a lot in this country because we have largely built our modern society around the use of cars and highways. The United States has actually enjoyed relatively low gas prices compared to the rest of the world for a long time (prices in the European Union are averaging ~$7.20/gallon right now). Cheap gas – in part because of heavy government subsidies and a robust federal highway investment program – fueled the car economy, reshaped cities, and ultimately left a devastating impact on the environment. 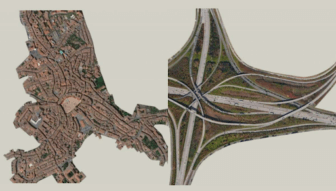 Comparison of the area of Sienna, Italy (population ~30,000) vs. a highway interchange in Houston, Texas (Credit: Chron.com).

With gas prices continuing to rise, policy makers are searching for answers. The bad news is there is not a short term answer to dealing with volatile fossil fuel prices that are tied to the world market. The good news is that there are sustainable models for dealing with high fuel costs.

Electric vehicles will certainly be a huge part of the solution, however, EVs remain out of reach for many Americans. Until we can invest in the necessary infrastructure and decarbonize our electric grid, we won’t reap the full benefits of electrification.

What is really glaring is the lack of access to public transportation and our zoning laws that incentivize endless sprawl instead of dense, walkable communities. There is a reason San Francisco, and SoHo New York are the most expensive real estate markets in the country: We outlawed building-dense neighborhoods like them virtually everywhere else.

Single family zoning, which has perpetuated racial and class segregation, has persisted in American culture as the ideal way to develop land. The white picket fence and big green lawn is a classic American image, but the flip side is longer and longer commutes, more hours in traffic, more pollution, and divided neighborhoods.

The evidence is right in our own backyard in Michigan. Pictured below is the historic Black Bottom neighborhood in Detroit that was home to one of the most thriving Black communities in the U.S before residents and businesses were displaced and shuttered to build I-375. We are hopefully learning from the past – plans to tear down the highway and replace it with a boulevard are in the works. While it cannot replace the wealth and culture lost, steps like these are part of the great societal transformation necessary to build a healthy and sustainable world.

Aerial view of Detroit before and after the construction of I-375 (Credit: Detroit Free Press).

Changing the ways our cities have developed is a big task. Thanks to the pandemic and rising costs, more and more people are re-evaluating their priorities in terms of where and how they live, work, travel, and play. What we know for a fact is that changing our zoning laws, building out bike infrastructure and making public transit affordable and accessible are all proven ways to reduce carbon emissions, lower costs and improve quality of life. 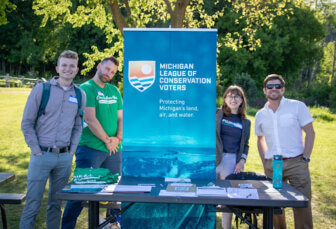 As Michigan’s preeminent climate conference, the summit featured keynote speakers Dr. Jonathan Overpeck and Marnese Jackson, as well as several panels on the importance of state-level climate action that several of our Michigan LCV teammates participated in. All told, the Michigan LCV team played a big role in the day-long event that turned out to be a smashing success! 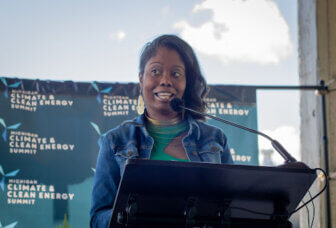 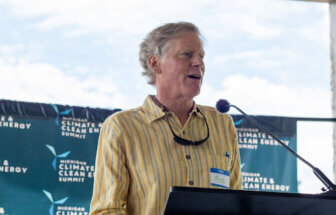 The Michigan LCV delegation’s experience at the summit was highlighted by our teammates’ participation in the day’s events: 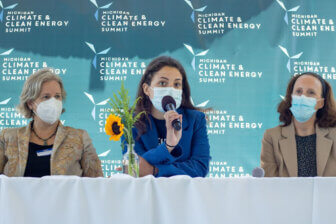 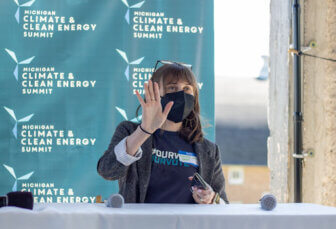 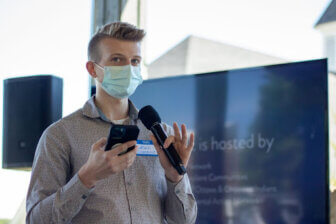 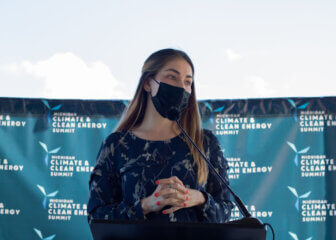 In addition to the Michigan LCV team’s participation on the two panels, our amazing Visual Storytelling Manager Samantha Schubert served as the Summit’s official photographer! Sam did a stellar job capturing some incredible photos of the day’s events, including those shown above (and below)!

Finally, last week’s climate summit was a debut of sorts for brand new Michigan Climate Action (MICAN) director Denise Keele! Denise is a longtime climate activist, environmental champion and a part of the Michigan LCV family. Prior to joining MICAN, Denise taught at Western Michigan University as a professor of Political Science and Environmental and Sustainability Studies. Last year, she worked with our team to share her story about the importance of bold climate action in Washington as part of our “Build Back Better for Us” storytelling series. You can check out Denise’s story here. 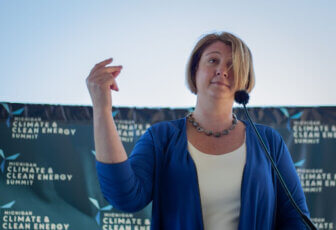 With years of climate expertise, Denise will be a fantastic director for MICAN. The Michigan LCV team is excited to work together to advocate for bold climate action here in Michigan! Congrats, Denise!