Huron River Chemical Spill: State officials issued a “do not contact” warning for parts of the Huron River after 8,000 gallons of the toxic chemical Hexavalent Chromium – a known carcinogen – was spilled into the river by Tribar Chemical. Last week’s spill marks the second time in four years that Tribar Chemical has been responsible for widespread pollution in the Huron River – the company is also responsible for toxic PFAS contamination detected in the river in 2018. 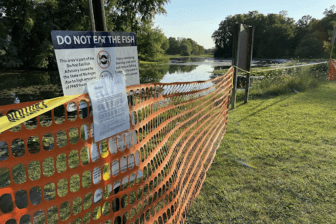 Congressional Climate Action: After Sen. Joe Manchin and Senate Majority Leader Chuck Schumer shocked everyone last week with news of a deal on a new reconciliation package focused on climate, energy, and taxes, all signs point to Democrats pushing for passage before Congress’ August recess. By some accounts,  votes could begin as early as this week on the so-called Inflation Reduction Act.

Last week after we prophetically proclaimed that climate legislation was dead, Senator Manchin announced a surprise agreement with Leader Schumer on a new reconciliation package called the Inflation Reduction Act. While the legislation includes major concessions for the fossil fuel industry, its other investments will jumpstart a necessary revolution in clean energy manufacturing and give us a window to fight back against future fossil fuel development. Overall, the package – as it currently stands – will cut U.S greenhouse gas emissions by 37 to 41 percent. 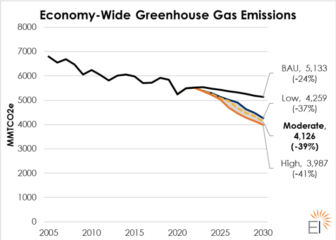 Critical Cuts: If the Inflation Reduction Act is not passed and we continue with “business-as-usual,” domestic emissions will only be reduced by 24% of 2005 levels by 2030 – less than half of the 50% goal (Credit: Energy Innovation).

At the heart of the Inflation Reduction Act’s clean energy provisions lie clean energy tax credits, which are integral to reducing emissions and cleaning up our air. Clean energy tax credits will provide financial incentives for increasing clean energy manufacturing and building out clean energy infrastructure, as well as incentives for industrial facilities to reduce emissions. The investments also include funding for key conservation projects, rebates for home electrification and up to $7,500 for consumers to purchase electric vehicles. Additionally, the think tank Energy Innovation estimates that the legislation will save 3,9000 lives annually by 2030 and create up to 1.5 million jobs.

To win Senator Manchin’s vote for the package, mandatory oil and gas leases will be required in the Gulf of Mexico and Alaska, harming already burdened communities who have borne the brunt of toxic pollution. Additionally, the bill ties lease sales for renewable energy to lease sales for oil and gas for the next ten years, which, if completed and drilled, would send the world dangerously over a safe carbon budget. The good news is that we have tools to make sure those lease sales are not drilled while incentives for clean energy will continue to lower the costs of renewables and lower the demand for fossil fuels.

Passing the Inflation Reduction Act won’t solve the climate crisis, but it gives us a window of opportunity to create a better future and rid ourselves of fossil fuels for good.

The Michigan Primary on Tuesday was a big day for Michigan LCV’s endorsed candidates at the state level. Across the board, our endorsed candidates – all of whom earned Michigan LCV’s endorsement because of their track records as environmental champions and their dedication to fighting to protect our land, air, water, health, and democracy – won the day as voters turned out across the state to make their voices heard.

Tuesday’s primary was the first statewide election that used the new State House, State Senate, and Congressional districts after Michigan’s independent, citizen-driven redistricting process last year. The new districts meant that many incumbents faced primary challenges and our national partners at the League of Conservation Voters endorsed candidates in several federal races in Michigan that emerged victorious on Tuesday!

Congratulations to LCV-endorsed environmental champions that won their primary races!

The Michigan LCV is thrilled to see Michiganders supporting environmental champions! With the focus now shifting to the general election in November, we are excited to get to work and elect candidates that will make a difference on issues facing our land, air, water, health and democracy.