Congressional Priorities: With climate action all but dead, Congress is moving ahead with other priorities before the August recess. Today, the Senate passed the $280 billion CHIPS and Science Act of 2022 – aimed at addressing the chip shortage that is used in a number of technologies, including automobiles.  Meanwhile, President Biden announced a push for $37 billion in funding for policing while legislation codifying gay and interracial marriage may just have enough Republican votes to pass into law. 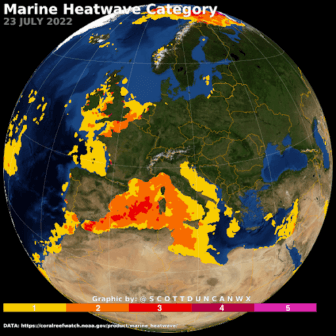 Mediterranean Heat Wave: While media attention has focused on terrestrial heat waves in Europe, the Mediterranean Sea is experiencing a massive marine heat wave of its own – water temperatures are registering 6.2 degrees Celsius above normal – presenting major immediate and long-term threats to aquatic ecosystems and biodiversity.

Sounding the Alarm: 165 staffers working in federal agencies and in 75 Congressional offices signed on to a letter calling for President Biden to do everything in his power to act on the climate crisis. On Monday, 17 Congressional staffers participated in an unprecedented sit-in in Leader Schumer’s office demanding he put climate negotiations back on the table. Six were arrested.

Released in 2021, Adam McKay’s “Don’t Look Up” (spoilers ahead!) provided a much needed satirical critique of how the Western world thinks and talks about climate change. In the film, a giant asteroid symbolizing impending climate catastrophe is heading towards Earth. Even though everyone can see it coming, rather than use available technology to deter the meteor, the President of the U.S teams up with a Jeff Bezos-esque billionaire figure to try and make money off of the meteor by mining it. Let’s just say that plan does not go too well.

The film rips apart our societal obsession with profit over everything else while delivering a scathing critique of the media landscape that has continuously failed to cover climate change as the emergency it is. Below is a clip from the movie immediately followed by a real news cast in England during last week’s heat wave: 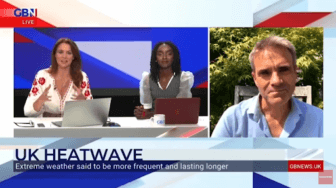 The problem is not just talk shows, but that traditional media platforms work very hard to cover “both sides” of the climate debate. In doing so, even publications that do not dispute the scientific consensus on climate change, usually frame the debate as naïve “climate activists” versus rational industry actors who are simply trying to provide energy for everyone. There is little coverage of the decades of deliberate disinformation campaigns funded by these industries. During reconciliation negotiations Senator Manchin’s conflict of interest in chairing a coal company did not get the attention it deserved. 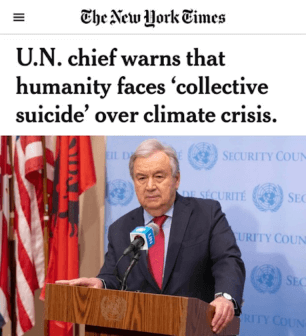 As society ignores the climate crisis, experts and leaders continue to warn of the consequences (Credit: New York Times).

To deal with climate change, we need to talk about it like it is – a crisis caused by fossil fuel consumption. It’s on all of us to push our leaders to do more and put the people ahead of fossil fuel interests who have gained so much influence in government. See here how climate scientists are talking about the crisis.

As discussed last week, failure on climate legislation in Washington, D.C. has elevated the importance of state and local climate action to move the needle on addressing climate change. As it’s an important election year – with Michigan’s governor, attorney general, and secretary of state up for re-election – Michigan LCV’s work to elect environmental champions has also become increasingly important.

Today, Michigan LCV formally endorsed Gov. Gretchen Whitmer for re-election in 2022! At a time when we must take action to address climate change and protect Michigan communities, Gov. Whitmer is the clear choice to serve as Michigan’s top executive for the next four years. As a lifelong Michigander and environmental champion, Governor Whitmer has demonstrated incredible leadership by working to protect our Great Lakes, clean up our drinking water, defend our democracy, and protect the health of our communities. 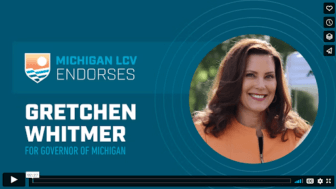 In addition to our endorsement of Gov. Whitmer, the Michigan LCV team continues to engage in coordinated canvassing efforts to support our endorsed candidates running for State House and Senate. On Tuesday, we joined State House candidate Jennifer Conlin to knock doors and talk with voters in Washtenaw County! 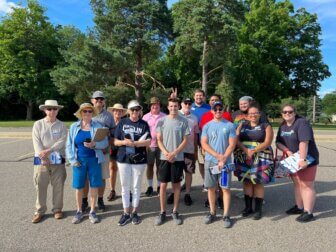 Getting out on the doors and talking with voters is a proven way to win elections and a big part of Michigan LCV’s coordinated election efforts. As our canvassing efforts continue – both before and after the August 2 primary election – we welcome your help in reaching a conservation majority in Michigan! Below are some of our upcoming canvasses happening across Michigan that you can sign up to join us for!