Welcome to the October 1st edition of Three Things Thursday. I send these weekly messages to keep you up-to-date on Three Things the Michigan LCV team — and our broader Conservation Voters Movement — have accomplished and/or experienced recently in our work to protect Michigan’s incredible natural resources and the health and well-being of our children and communities.

The investments are centered around the Whitmer administration’s belief that access to clean, safe drinking water is an essential human right, and something that has been severely disregarded over the past several decades in our state. Michigan LCV shares this belief wholeheartedly, and fighting for access to this basic human right has always been a cornerstone of our organization’s work.  And, in the face of the ongoing COVID-19 pandemic, there is increased urgency to address critical shortcomings in Michigan’s water infrastructure.

The infrastructure plans, catalyzed by a Department of Environment, Great Lakes and Energy (EGLE) workgroup in 2019, focus on strategic investments at both the state and federal level aimed at fixing Michigan’s failing water infrastructure, while encouraging job creation and growth in Michigan communities. As the Whitmer administration points out, for every $1 million invested in water infrastructure, 15 jobs are created (Economic Benefits of Invest in Water Infrastructure, VOW).

You can find more details in the plan in the full Three Things for this week on our website here.

Here are some of the key details:

….And also to wastewater protection:

I’m proud to announce that our state SuperPAC — Conservation Voters of Michigan PAC — has raised over $1.2 million and is investing in races for the Michigan State House of Representatives, Michigan Supreme Court, and Oakland County Board of Commissioners.

This investment — centered around our consistent #OurWaterOurVote message — makes it one of Michigan’s largest state-level campaigns this election cycle (see our media release here).

Our 2020 campaign comes on the heels of our more than $3 million 2018 campaign when #OurWaterOurVote played a pivotal role in electing the Governor, Attorney General, and state lawmakers in both chambers.

Here’s a snapshot of our program:

This investment is being aligned with spending by other partners to the same targets with mail, streaming TV ads, and social media that echoes similar themes.

B) Michigan House: #OurWaterOurVote has been up for several weeks with a robust digital package on behalf of our key endorsed candidates — clocking 1.93 million impressions total, a large chunk of it consisting of what is considered “non-skippable” content. This has included: social media advertising – both video and static ads; Google search and display ads; and GIFs — all driving back to individualized landing pages on our website.

Additionally, the first two mail pieces have dropped (with more to come) — one last week and then one on Tuesday.  Our program is focused on first time absentee voters and then a later wave focused on those casting ballots in-person.

C) Oakland County Board of Commissioners: our 2020 #OurWaterOurVote county level program is focused on a half-dozen endorsed incumbents and candidates who have made protecting our water and air at the municipal level a top priority. This work includes mail and layers of digital advertising on behalf of a dynamic set of all-women candidates!

As you know from past Three Things Thursdays, #OurWaterOurVote has already been a focal point for our partnership with national LCV Victory Fund, which has spent millions in Michigan over the past 7 months on both the presidential and congressional races — all amplifying and echoing this drumbeat around drinking water protection.

LCV has coupled this with a sizable investment in congressional races, including:

#OurWaterOurVote is building significant momentum for candidates who are talking about protecting our drinking water, our public health and our children’s futures.  Michigan LCV continues to make this critical issue a flashpoint and create sharp contrast with our opponents, so voters can make their decisions based on who they trust to protect our health and clean up our water.

In addition to the outstanding work we have been doing via Conservation Voters of Michigan PAC (outlined above), the majority of our team has been working in a hands-on and coordinated manner with candidates, themselves.

Endorsements: Our Government Affairs team has worked hand-in-glove with our Electoral Advisory Committee on a whole slew of amazing candidate endorsements. These endorsements range from candidates for Michigan’s Supreme Court (did you see the great Detroit Free Press endorsement today of Chief Justice Bridget McCormack and candidate Elizabeth Welch? Check.  It. Out! You’ll even see Michigan LCV mentioned!) and candidates in key  state House districts to a slate of Oakland County commission candidates. I invite you to take a peek at our up-to-date list of endorsements on our website.

Member Base Organizing: Our Political and Outreach team has developed action teams across the state, and they are working on a number of key races, from Oakland County to Grand Traverse County. Over the past few months, Michigan LCV organizers have been contacting our members and providing them with a variety of ways that their time and passion can be translated into concrete wins for clean air/water and climate justice through this election. Due to their tenacious efforts, we have a cadre of “ready to rock” volunteers who are stepping up to fill critical shifts for Get Out The Vote (GOTV) and election day.

Tiered Engagement: We have tiered candidate engagement, putting our emphasis on endorsed candidates who need our help the most. Our “Tier One” strategy provides candidates with direct financial support (a Michigan LCV PAC gift), as well as a menu of voter engagement and mobilization activities, including virtual canvassing, door knock/lit drop canvassing, paid phones calls, peer texting, and Michigan LCV volunteers embedded directly into the candidates’ voter outreach plans.

In just the past few weeks, we’ve knocked 1,084 doors, made 10,673 dials, had 939 conversations and made 604 positive candidate IDs (voters who plan to vote for our endorsed candidates).

Our “Tier Two” candidates also get direct financial support from Michigan LCV PAC, along with weekly phone banks and digital events in support of their races.

The Oakland County Green Partnership: Over the past year, our team has built a robust partnership with Sierra Club to promote the Climate, Jobs and Justice platform in Oakland County.  It’s called Oakland County Green. The issues emphasized in the platform range from investing in green infrastructure and a countywide septic code to eliminating lead contamination in drinking water, protecting the most vulnerable through lead service line replacement, and other essential pollution remediation.

Now that the platform is in place, we’ve turned our attention to the elections, recognizing that “whom we elect matters.”  With the right set of electeds on the Oakland County Commission, the Oakland County Green platform can and will become a reality!

In short, team Michigan LCV is rockin’! We’re getting it done in races up and down the ballot, in a state that matters immensely.

Thank you for your trust in our work!

PS  Don’t miss your 2020 Virtual Gala on October 14th! We are celebrating the extraordinary leadership of Governor Whitmer, Lt. Governor Gilchrist and an amazing Detroit activist named Theresa Landrum.  Our program will include special guests Congresswoman Slotkin and U.S. Senator Peters, as well as Detroit poet extraordinaire Natasha Miller. With your help, we are going to build an outstanding array of sponsors and attendees. Please join us! 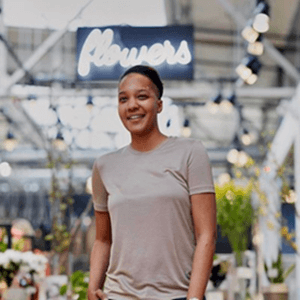 Natasha T Miller is a Detroit, MI native, Kresge Artist Fellow, performance poet, LGBTQ activist, and film producer. Natasha has been a member of four national slam teams, starred in a national sprite commercial, a Shinola CNN ad, and she is a Women of the World Poetry Slam 3-time- top five finalist. She has awed audiences across the world at more than a hundred universities, and venues, performing in stadiums for as many as thirty thousand people. She has been featured in magazines such as Vogue, Elle, entrepreneur magazine, and many more. She’s had poems featured on sites like The Shaderoom, the offing magazine, afterellen and many more. Just recently she opened up for the famous band Mumford and Sons in front of the first sold out crowd at the Little Caesars Arena in Detroit. Natasha currently tours the world using her words to enlighten, create equality, and most importantly spread truth, and forgiveness in the tradition of so many great leaders before her.