Welcome to the June 9, 2022 edition of Three Things Thursday! This edition is full of very positive news (which is refreshing!), but I’m throwing in some last minute breaking news that falls under the heading, “you can’t make this stuff up”!

Republican gubernatorial candidate Ryan Kelley was arrested today at his home in Allendale Township and is facing misdemeanor charges alleging he participated in the Jan. 6 insurrection. It seems the FBI has video footage of Kelley in a crowd of people who were assaulting and pushing past law enforcement officers. Wow. Just the kind of guy we want representing us in our state’s highest office (not!).

1. Michigan LCV’s second round of 2022 endorsements

This is a big election year in Michigan, with the Governor, Secretary of State, and Attorney General all up for re-election, and with our newly redistricted state House and Senate districts creating more swing seats than we’ve seen in decades.

Ahead of the April filing deadline, the Michigan LCV team was keeping a close eye on the new candidates emerging, analyzing our opportunities for change to ensure we have a 2023-24 legislature that is committed to tackling our water challenges and the climate crisis, and standing strong to protect voting rights and our democracy.

Today we unveiled our second round of endorsements for the 2022 election cycle, which features a set of outstanding leaders from across Michigan, all of whom have strong track records on our issues. 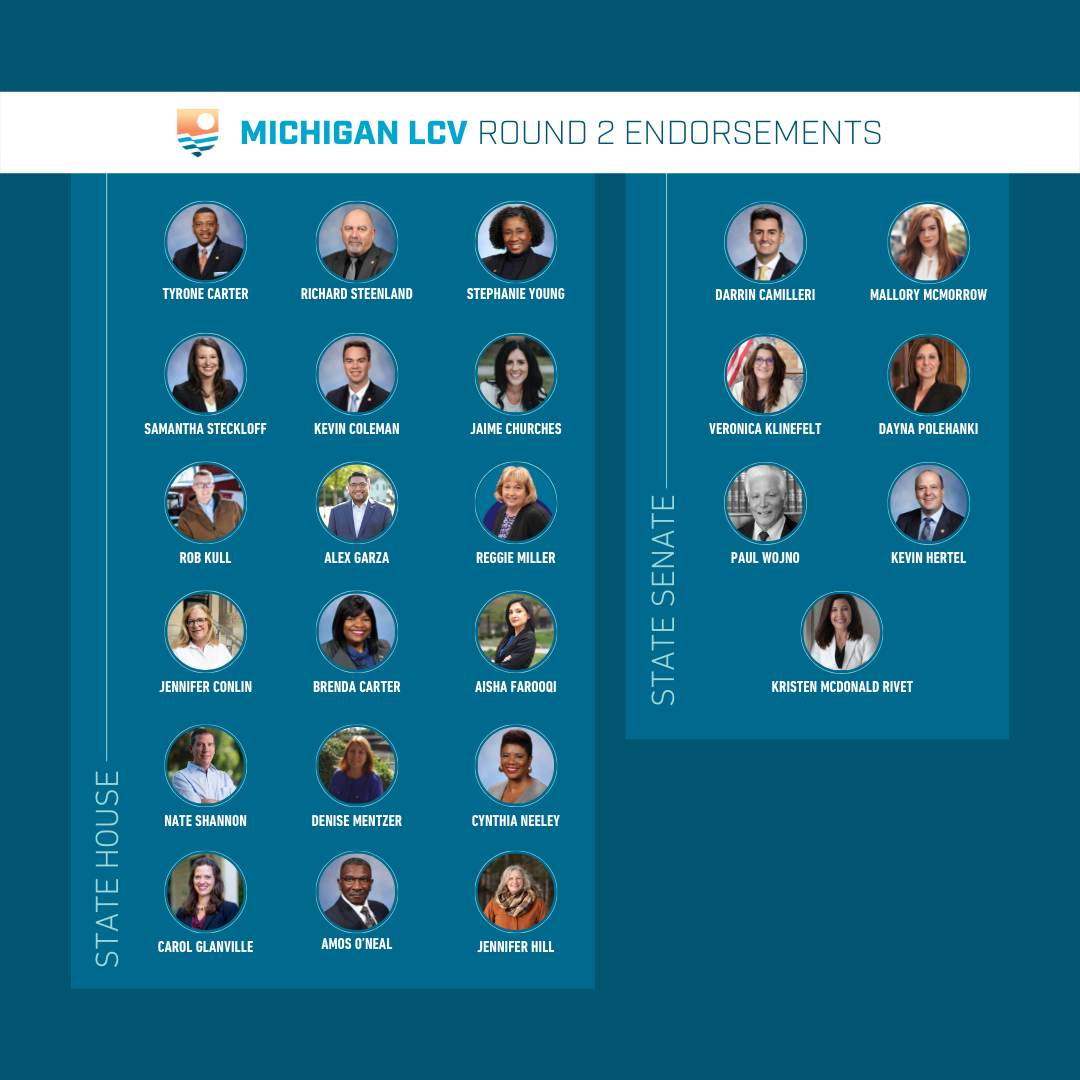 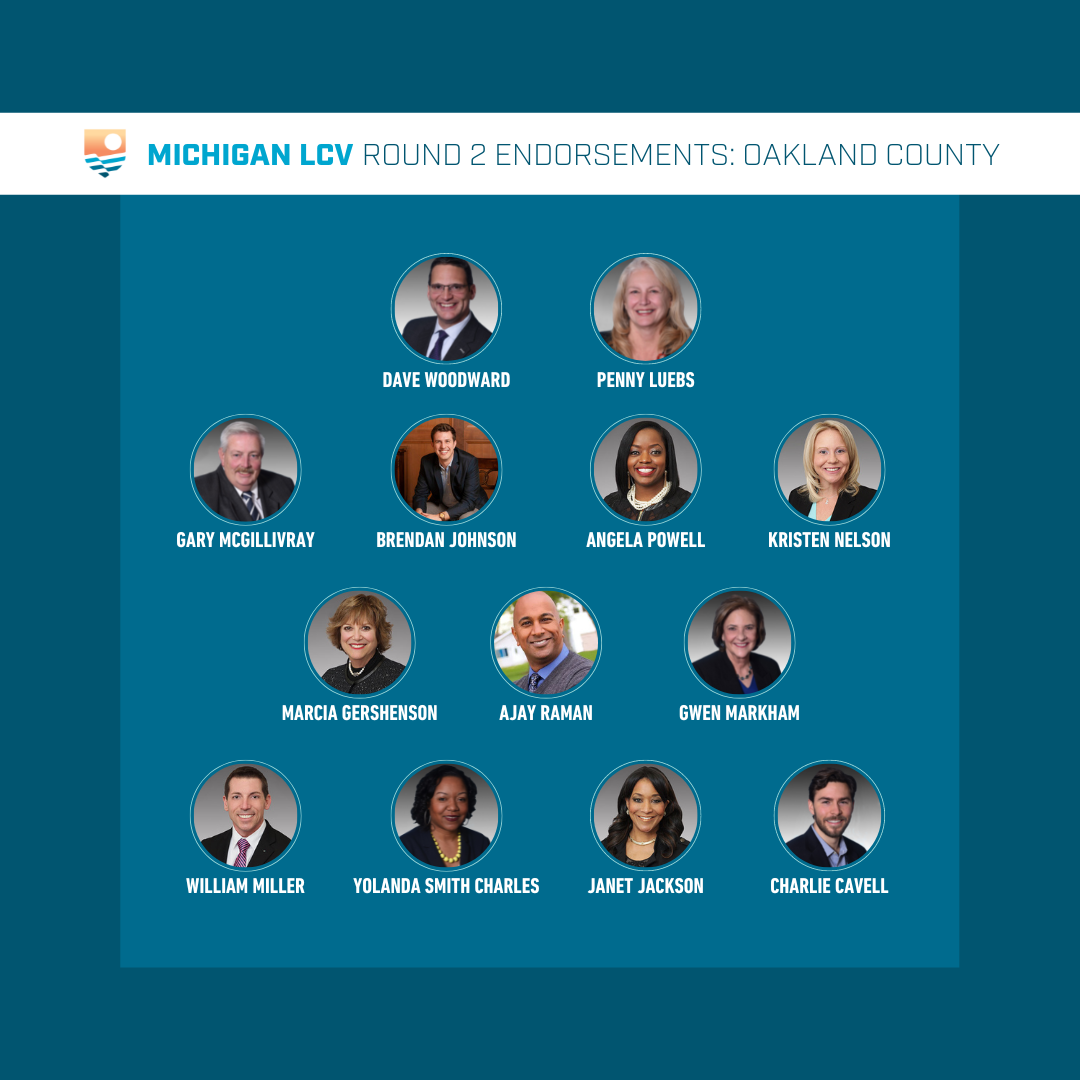 For a full list of our endorsements, you can visit our 2022 Endorsements webpage.

At Michigan LCV our endorsements aren’t just simple “paper” endorsements; we roll out a full suite of benefits to each candidate. In addition to doing localized media releases, our Communications team creates awesome, customized toolkits for EVERY endorsee, which include:

Here is a sample of the individualized video ads featuring Michigan LCV’s former board member, Rep. Sarah Anthony of Lansing: 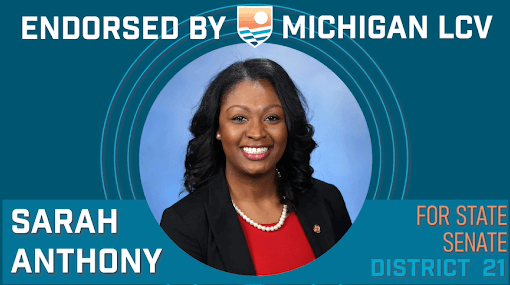 Check out the full video here.

Electing environmental champions to office is a key pillar of Michigan LCV’s work. Our team spends a lot of time evaluating and reviewing candidates, which includes their viability and record on important priorities relating to our land, air, water, climate, public health and democracy.  For candidates without a track record in office, our candidate questionnaire is especially important, providing us with a sense of a candidate’s values, priorities and commitments.  Our robust process ensures that we endorse candidates who not only talk-the-talk, but will walk-the-walk once elected.

I encourage you to check out our 2022 Endorsements webpage for more information on each of our endorsed candidates and learn how you can take action to help the Michigan LCV elect champions to office this year.

It’s a big week of climate action for the Michigan LCV team, with a number of developments on the federal level, as well as important things happening in Michigan. Let’s start with the latter:

Today, a delegation of Michigan LCV teammates took part in the Michigan Climate & Clean Energy Summit in Traverse City. Hosted by the Michigan Climate Action Network (MICAN), the summit offered us an important opportunity to connect and strategize with a myriad of pro-climate action partners as we work for change at the local, state and federal level.

The Summit was headlined by two outstanding keynote speakers: Dr. Jonathan Overpeck and Marnese Jackson. Dr. Overpeck is an interdisciplinary climate scientist and the Samuel A. Graham Dean of the School for Environment and Sustainability at the University of Michigan who has worked extensively on climate and environmental science throughout his career. (Secret? He’s also Michigan LCV Education Fund board member/amazing UM climate scientist Julia Cole’s husband.  Talk about a dynamite climate team!). Marnese Jackson has worked extensively as an environmental and climate justice activist, advocate, and educator with a wide number of organizations, and serves as both a board member of the U.S. Climate Action Network and an appointed member on the Michigan Council on Climate Solutions created by Gov. Gretchen Whitmer.

Our State Government Affairs Coordinator, Hallie Fox, represented Michigan LCV on a panel, which focused on the importance of federal and state-level organizing and what must be done at every level of government to address the climate crisis. 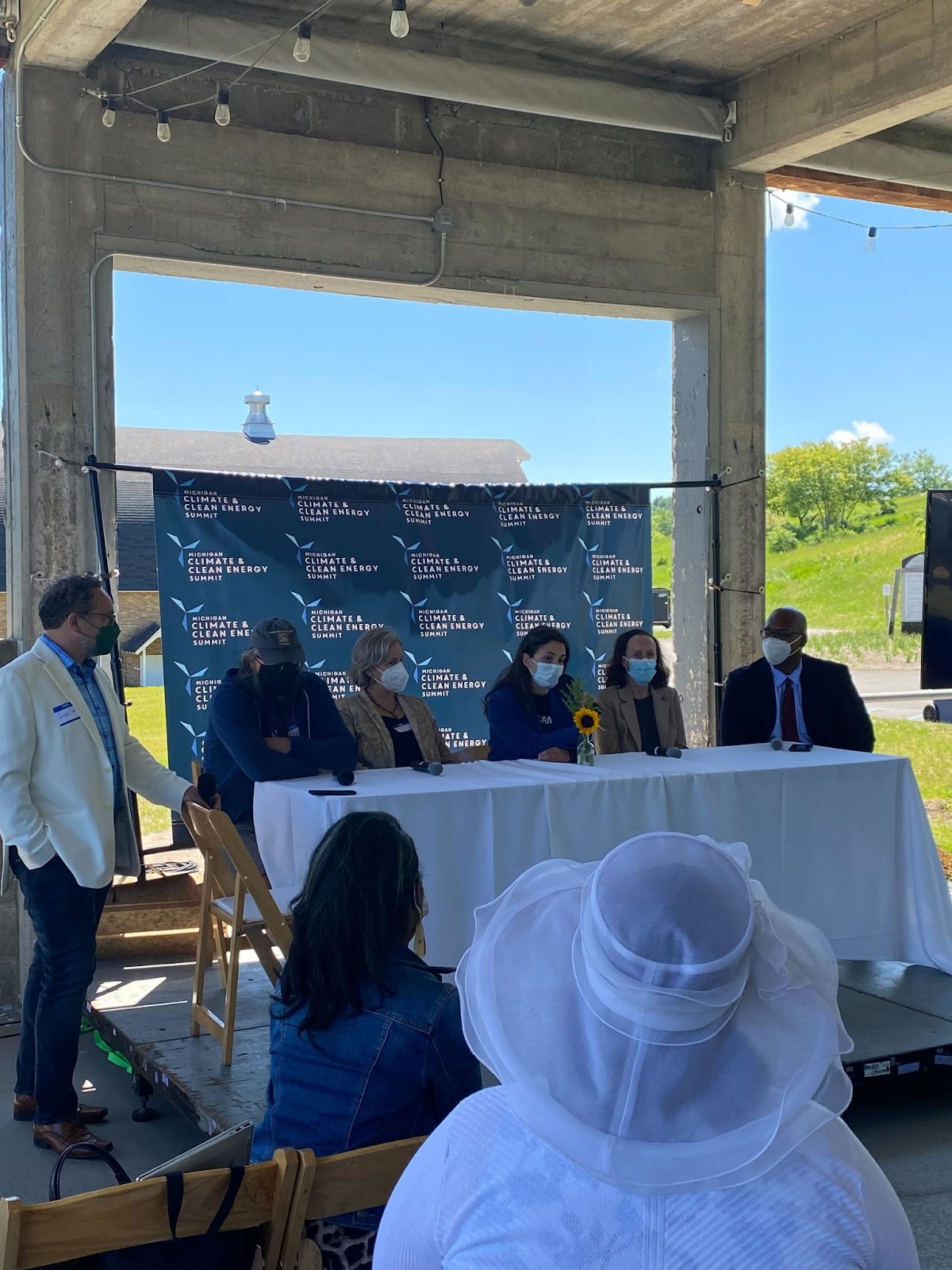 “A World Without Ice”

While in Traverse City, I encouraged everyone to check out Henry Pollack’s climate-focused multimedia exhibit, “A World Without Ice”, which  is currently being shown at Traverse City’s Dennos Museum Center on the campus of Northwestern Michigan College. Henry, as so many of you may know, is a world-renowned climate scientist whose work in Antarctica has been groundbreaking for understanding climate change and the threats it poses to our planet and humanity. Dr. Pollack’s  book of the same title served as the inspiration for this exhibit. Here is the description of what the exhibit entails:

Musicians, composers and artists Michael Gould, Stephen Rush and Marion Trankle have collaborated with climate scientist Henry Pollack to create this multimedia installation that captures a precarious moment in the history of our planet. Part science and part art, this collaboration is a ground-breaking, thought-provoking and compelling multisensory experience focusing on Earth’s changing climate.

The collaboration takes its inspiration from Henry Pollack’s book A World Without Ice. An original composition by Stephen Rush along with musical patterns and structure derived from a century of climate data anchors the installation. An innovative ice-melt actuated instrument comprising suspended ice domes melting drip-by-drip onto an array of differently tuned drums complements Rush’s score. A film by Marion Trankle blends beautiful photographs from both the Arctic and the Antarctic, providing a gorgeous, slowly-evolving large-scale visual envelope for the installation. The overall narrative of the imagery takes the viewer from a totality of ice, slowly evolving into landscapes of ice, land and water, eventually reaching an enveloping ocean that characterizes Earth without ice.

The exhibit creates a unique space in which visitors can contemplate Earth’s changing climate and shape their own perspectives of this ongoing global transformation. No visitor leaves the installation unchanged.”

If you are in the Traverse City area, I highly recommend you take time to see the exhibit, which runs through July 24th.  Visitors can view the exhibit Tuesday through Sunday.

NOTE: We were delighted to honor Dr. Pollack and his amazing wife/environmental leader/Michigan LCV co-founder and board member, Lana Pollack, at our Detroit Gala in 2015. 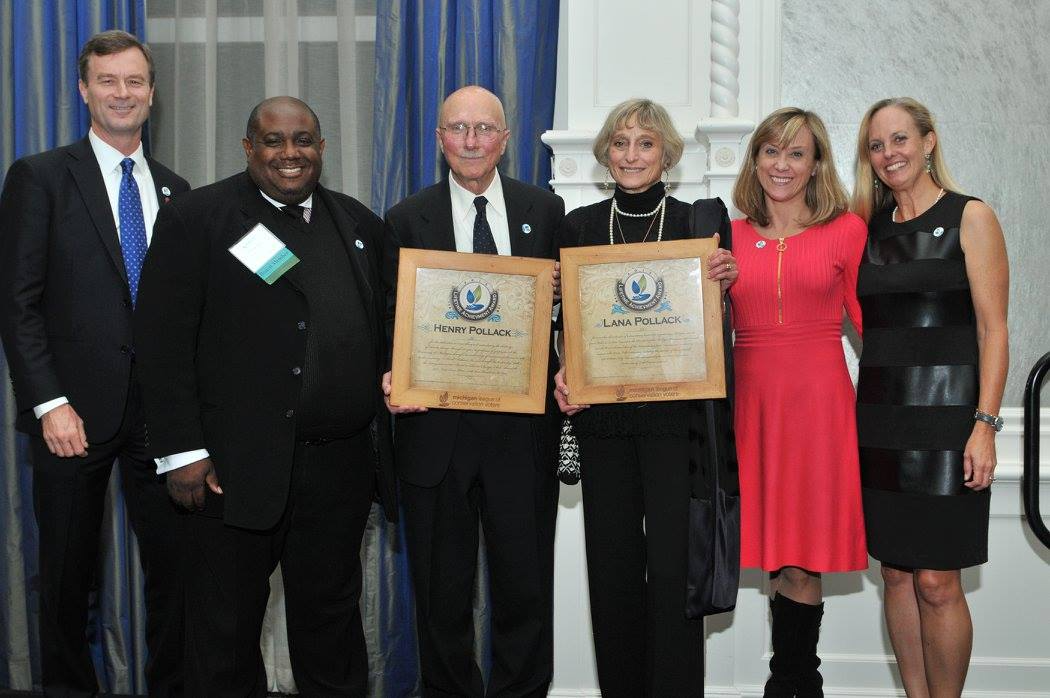 There have been some recent developments on the federal level on climate action that are cause for cautious optimism:

Sen. Joe Manchin’s bipartisan energy conversations with Republican Senators are seemingly over, opening the door for the West Virginia Senator – who stood in the way of President Biden’s climate agenda – to make a reconciliation deal with Senate Majority Leader Chuck Schumer. Although nothing is certain, recent developments are a hopeful sign and could lead to a climate and energy deal that would help tackle the climate crisis.

Bold Action in the 2022 Elections:

A coalition comprised of Climate Power Action PAC, Climate Reality Action Fund, EDF Action Votes, NRDC Action Votes, NextGen PAC, and the League of Conservation Voters Victory Fund announced on Monday a coordinated spending campaign totaling $100 million that will result in multiple ad campaigns, field organizing in battleground states, and other electoral efforts ahead of the 2022 midterm elections. This is the first coordinated spending campaign of its kind – and of its scale – and is an aggressive move from the climate action movement as we collectively work to make climate action a centerpiece of this year’s electoral conversation.

This week the U.S. Climate Alliance – a coalition of 22 governors committed to the goals of the Paris Climate Accord that includes Michigan’s Gov. Gretchen Whitmer – sent a signed letter to Congress urging our lawmakers in Washington to make bold climate investments through legislative action. The letter, which was sent specifically to Congressional leadership, calls for swift action to pass legislation focused on climate and clean energy investments outlined in President Biden’s climate agenda:

We need major investment from Congress commensurate with the crisis we all face and the rapid transition we must all make. The U.S. House of Representatives previously approved a transformative $550 billion climate package for this purpose, and it is critical that any climate package include a similar level of funding.”

After stalling in Congress earlier this year, the Biden climate agenda still has the possibility of being passed under budget reconciliation. More on this in the days ahead. 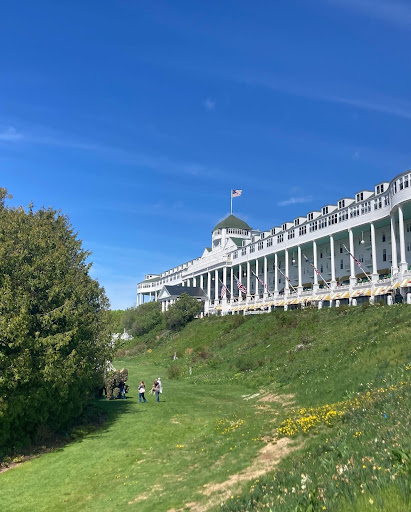 The conference offered our team a chance to have one-on-one conversations with policymakers about the issues that matter most to the protection of our air, land, water, public health, democracy, and climate, as well as attend some fundraising events for environmental champions. 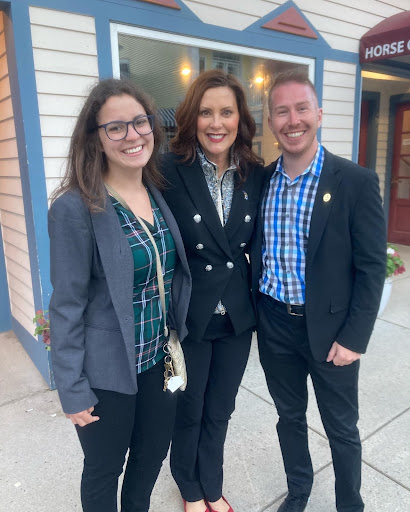 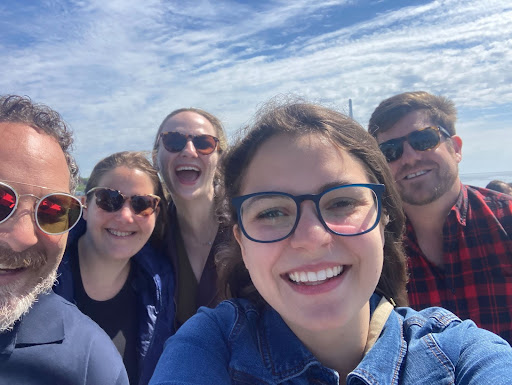 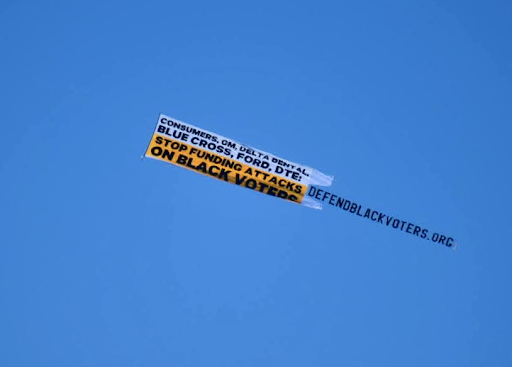 A banner from the Defend Black Voters Coalition, which urged major Michigan political donors, including DTE, Ford, GM, and Blue Cross Blue Shield to “Stop Funding Attacks on Black Votes”, was flown over the island during the conference.

Aside from the meetings, fundraisers, and meet-and-greets, the conference was highlighted by Ford’s announcement to invest $2 billion in electric vehicle manufacturing in Michigan, a move that will create 3,200 union jobs across three plants in Dearborn, Wayne, and Flat Rock. This is great news for Michigan and for EV development, which is one of the many ways that we can take action to address the climate crisis. Ford’s announcement comes on the heels of GM’s announcement earlier this year to invest almost $7 billion in EV battery manufacturing in Michigan.

As always, thank you for all you do to support our work. Until next week, be safe, be well and take time to admire all the beauty that surrounds you… From the Immersive VanGogh exhibit Poppies… my garden in Manchester