Welcome to the August 20th edition of Three Things Thursday.  I hope this message finds each and every one of you safe and healthy. This week’s Three Things digs into what the Biden/Harris ticket means for our issues, highlights our latest round of endorsements, and provides a new way to get involved in the Line 5 fight.

Last week, after months of speculation on the part of pundits around the nation, Joe Biden announced CA Senator Kamala Harris as his running mate.  Given Senator Harris’ strong track record on climate change and environmental justice, we’re confident this duo will put protecting our air, land, water and public health at the forefront of their campaign. Indeed, we have seen first-hand evidence of this throughout the first three days of the virtual Democratic National Convention, with 51 speakers mentioning climate change. Last night, in fact, climate and environmental justice were  focal points in speeches by New Mexico Governor Michelle Lujan Grisham, farmer Andrew Adamski (co-owner of Full Circle Community Farm), and Katherine (Kati) Lorenzo, as well as Senator Harris as she accepted the vice presidential nomination.*

But, let’s dig a little deeper. Here are some things you should know about Senator Harris:

There is no question that Senator Harris understands that, due to the disproportionate siting of big industry in communities of color, pollution impacts communities of color at higher rates.  Importantly, Senator Harris has demonstrated her dedication to addressing environmental injustice by attacking the source — combatting corporate pollution and fighting for sustainability  — in a quest for healthier, safer communities and a healthy planet for future generations.

As the Demcratic National Convention began, the Michigan LCV team was asked to participate in a virtual volunteer recruitment event hosted by the Biden campaign. 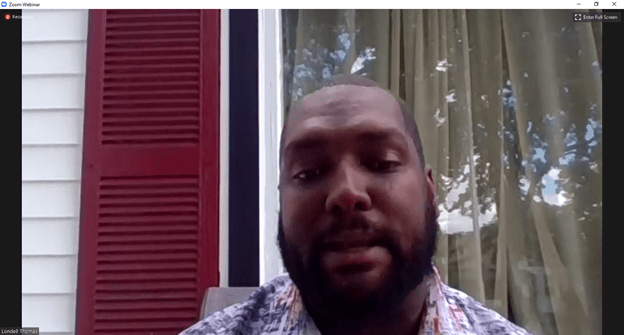 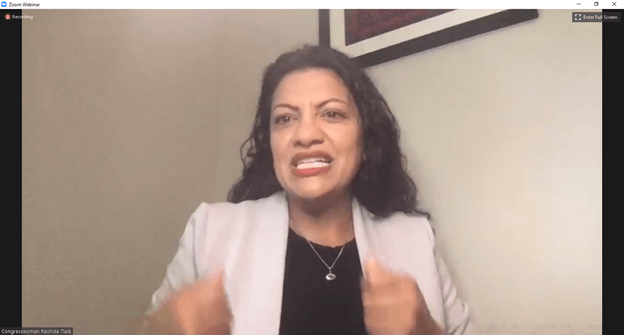 On Tuesday, our Political & Outreach Director Londell Thomas spoke on behalf of Michigan LCV, alongside Sierra Club’s Justin Onwenu (who was also featured during last night’s virtual convention!) and Congresswoman Rashida Tlaib. Londell focused on our environmental justice priorities, the impact climate change is having on Michigan, and what Michigan LCV is doing to get voters activated for November.

Michigan LCV endorsements are awarded to candidates who demonstrate a strong commitment to protecting the health of Michigan’s communities, which includes but is not limited to: cleaning up toxic contamination in our water, tackling the climate crisis, addressing inequities in our communities around air quality and access to clean water, and protecting our natural resources.

Candidates considered for endorsement are put through a thorough vetting process that includes completion of our candidate questionnaire and an in-person interview, which we have had to transition to virtual meetings amidst Covid-19.

We were proud to endorse these environmental champions.  Now it’s time to get to work and get them elected!

It appears that the state is nearing completion of a review of its 1953 Line 5 easement agreement with Enbridge Energy. We believe the results of this review will give Governor Whitmer everything she needs to finally revoke the easement and shut Line 5 down, once and for all.

In the meantime, Enbridge is still seeking approval for its so-called tunnel project, an effort to replace Line 5 that would tether our state to another generation of fossil fuels and continue to put our Great Lakes at risk.

You may remember that, back in June, the Michigan Public Service Commission (MPSC) rejected Enbrige’s request to move forward with their Line 5 “tunnel” construction without the commission’s detailed oversight and review.  On Monday, the MPSC will be holding a public meeting on Enbridge’s Line 5 “tunnel” proceedings, during which an overview of the “tunnel” application process will be discussed and there will be an opportunity for public comment.

Given Enbridge Energy’s abysmal track record, team Michigan LCV strongly believes that this company must not be allowed to proceed with any project that puts our Great Lakes and freshwater at risk. 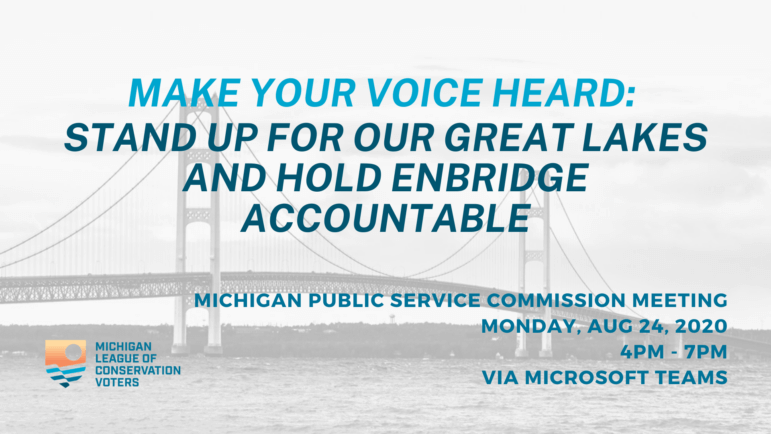 We are strongly encouraging our members to attend the MPSC meeting to make their voices heard.  It is imperative that the Public Service commissioners hear that this is not a company to be trusted. They have lied at every turn and completely dismissed requests coming directly from Governor Whitmer. Enbridge Energy must be held 100% accountable. I would be delighted if you would take a moment to sign up, make your voice heard and/or share our online action here.

As always, thanks so much for all you do to support our work. We couldn’t do what we do without you. Until next week, please be safe…

* It was amazing for me to watch the speeches last night because I knew the backstory of so many of the speakers. For example, my counterpart in New Mexico and the team at Conservation Voters of New Mexico played a pivotal role in getting Governor Lujan Grisham — a climate change champion — elected!  Farmer Adamski is a volunteer with Wisconsin Conservation Voters!  And, Kati Lorenzo used to work for Chispa Nevada (a national LCV program) and is currently a program associate with one of our key climate/energy partners! Go team!