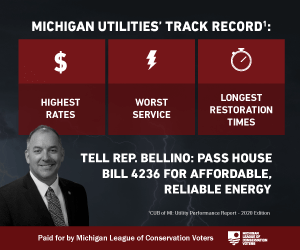 Michigan LCV is committed to holding any and all accountable for standing in the way of Michigan’s clean energy and climate friendly future.

View some more of our ads below, and read more detail about the campaign here!

Throughout his time in office, Chairman Bellino has taken over $78,000 from Michigan’s major utilities and other utility special interests, including a free golf outing with DTE executives which is currently under investigation by state officials for violating campaign finance laws.

While no one can wholly understand the motivations of another, the House Energy Committee under Chairman Bellino’s leadership has too often protected the interests of Michigan’s major, for-profit private utilities – even while they continue to charge residents the highest energy rates in the Midwest. Despite paying those exorbitant rates, utility reliability has been terrible in Michigan with the second worst power restoration time nationally, even on days without severe weather events.

And it’s not just Michigan LCV that is tired of the games.  Groups like Michigan United, the Conservative Energy Forum, Vote Solar, and others have run out of patience with the stall tactics and are taking their case directly to Michiganders! 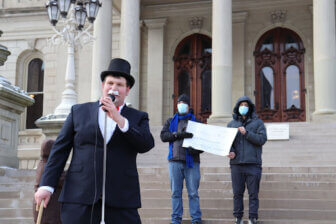 MI United led a press event and direct action on the Capitol steps calling out Chairman Bellino and the utilities for their unsavory financial contributions.

Elimination of the cap is a crucial step towards achieving a clean energy economy, reducing our dependence on fossil fuels, and making the state’s energy grid more resilient against the effects of climate change. Enough is enough, we cannot allow the utilities to continue obstructing Michiganders’ access to clean energy. Michigan LCV is committed to holding Chairman Bellino accountable for his obstruction and passing HB 4236.

In this week’s edition of the Public Service Spotlight, Michigan LCV is featuring Marie Mihelich. Marie works as the Chief of Staff for Sen. Jon Bumstead, (R-Newaygo) who was the lead sponsor 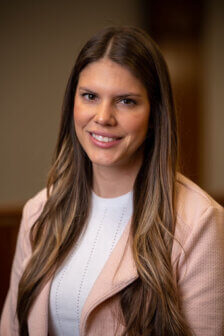 for SB 565. Marie’s work behind the scenes on stakeholder engagement, policy analysis, and bill drafting was critical in the push to pass the bill through the Senate, and the people of Michigan are lucky to have her as a resource on this issue!

Q: What are some environmental issues you feel are most important in Michigan?

A: There is no place in the world with the freshwater resources that we have here in Michigan, and protecting our natural resources from contaminants and pollutants is very important to me. This includes maintaining and preserving our natural water resources, including the Great Lakes and our inland lakes, rivers and streams.

Q: In your opinion, what does the passage of SB 565 mean for the state?

A: This bill is not only historic because of the total investment into the state, but also because every community big and small will be positively impacted from this funding — especially with the infrastructure failures that our state has had over the last several years with Flint and the Midland Dam. The safety and structural soundness of our water and water infrastructure is something that residents of our state should have trust in, and this investment is a huge step in the right direction.

Thank you for your service, Marie!

Michigan LCV’s digital accountability suite allows voters to see how state legislators, executive officials, judges, and legislation meet the mark on environmental priorities. This week, as part of our scorecard focus, we want to highlight the recent, unanimous state Senate passage of SB 565, a $3.3 billion investment in Michigan’s crumbling water infrastructure. The bill, which initially provided for $2.5 billion in spending, was increased to account for the new funds allocated to Michigan under the Infrastructure Investment and Jobs Act (IIJA, or Bipartisan Infrastructure Bill), which passed at the federal level last month.

Our state currently has a $20 billion need for water infrastructure upgrades and improvements over the next 10 years, as outlined by former Gov. Rick Snyder’s 21st Century Infrastructure Commission. By utilizing federal COVID relief funds, SB 565 starts the process of updating the state’s aging water infrastructure at a low cost to taxpayers.