On Thursday, the state senate unanimously passed SB 565 — a transformational, $3.3 billion water infrastructure spending bill. The proposal, which initially called for $2.5 billion in spending, was increased to $3.3 billion to reflect recent investments under the Infrastructure Investment and Jobs Act (IIJA, or Bipartisan Infrastructure Bill). Here are some of the highlights from the legislation as it currently stands:

… and so much more! Now that SB 565 has moved out of the Senate, we need your help in getting it across the finish line in the House. Check out this action alert to tell your lawmaker to Fund MI Water by passing SB 565!

Enough is Enough. Cut the Subsidy Crap – Lift the Cap!

Michigan’s major utilities have been united in their opposition to HB 4236 — a proposal to remove the arbitrary 1% cap on distributed generation. The utilities’ main line of attack against the bill is a motivated, false claim that rooftop solar owners would be subsidized by non-solar customers. The utility companies’ lobbying stands in the way of expanded access to clean energy in Michigan, and enough is enough. Here are some direct quotes from Michigan Public Service Commission (MPSC) officials and from the Regulatory Assistance Project’s Smart Rate Design report which definitively dispel the notion that any cross-subsidy or cost shift exists, and demonstrate the arbitrary nature of the current 1% cap:

In our new Public Service Spotlight feature, MLCV will share profiles of dedicated public servants (legislative, executive, administrative, and stakeholders staff, lawmakers, key decision-makers and bureaucrats, etc.) in Lansing who work tirelessly behind the scenes for the people of Michigan and our environment. This week, we are featuring Tom Stephenson, who works as Legislative Director for Rep. Rachel Hood (D – Grand Rapids). 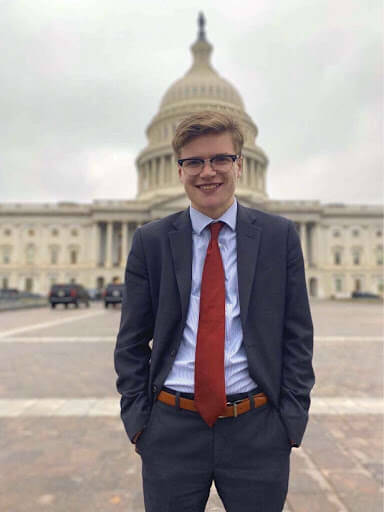 Q: What experiences led you to take a job in Rep. Hood’s office?

A: “I have been involved in the political process since I was 8 years old, and helped do some work on Pres Obama’s first campaign. Once he was in office, I became an advocate for the passage of the affordable care act, and throughout my high school and early college years, I remained involved in encouraging youth turnout in our elections. I’ve been involved in Representative Hood’s office since my freshman year of college, and this year, I moved into the legislative director position.”

Q: What environmental policy issues have you worked on recently that you are most proud of?

A: “Recently, our office introduced a bipartisan package of lead bills aiming to open up treatment services and strengthen regulations for lead abatements around our state. I am proud to have helped manage the roll out of this package and I am excited to continue to work with our partners on both sides of the aisle, as well as our stakeholders to get these common sense reforms into law so that we can continue to fight against the preventable poisoning of our children by lead in Grand Rapids and around the state.”

Thanks for all your service, Tom!