Primary Motivations: The results of primary elections across the country are beginning to show a trend of voters choosing candidates that want to deliver climate jobs and justice legislation and ousting those who worked to thwart the Build Back Better agenda. As the 2022 election cycle continues to unfold, it will be interesting to see if this trend holds true.

Not In Kansas Anymore: Last Friday, an extremely rare EF5 category tornado hit Gaylord, MI, killing two people and injuring more than 40 while causing widespread, extensive damage to the small northern Michigan community that doesn’t even have a tornado siren warning system. While there is no direct link, extreme weather events like this are expected to become more common as the impacts of the climate crisis worsen.

Greenslide Down Under: Earlier this week, Australian voters ousted right-wing, pro-coal prime minister Scott Morrison, electing center-left Labor Party candidate Anthony Albanese and winning the majority in Parliament in what some are calling a “greenslide.” These pro-climate action election results are a promising sign for Australia, which has severely lagged behind other global powers in taking meaningful climate action.

While Michigan voters don’t head to the polls until August 2nd for this year’s primaries, primary elections across the country have already been held in several states. A theme emerging in Democratic primaries across the country is that voters are sick and tired of inaction on climate.

On May 17th in Pennsylvania’s Senate primary, John Fetterman defeated Joe Manchin endorsed and current Rep. Connor Lamb. Fetterman campaigned on getting rid of the filibuster to enact President Biden’s agenda. In a Pittsburgh suburb, Summer Lee won her primary for a house seat over Steve Irwin who was backed by Republican mega-donors.

Last night, in a member vs. member primary in Georgia, Rep. Lucy McBath defeated Rep. Carolyn Bourdeaux. Rep. Bordeaux was also a member of the “Unbreakable Nine.” Another member of the nine, Rep. Henry Cuellar of Texas is in a race that is too close to call at the time of writing. His challenger, Jessica Cisneros, is endorsed by the League of Conservation Voters.

Three of the nine most public opponents of Build Back Better have lost their primaries, with potentially one more set to join them. In addition two of the “Unbreakable Nine” have chosen to retire before they could face public scrutiny. It is clear that voters want to see action on climate, jobs and justice, and getting in the way of that agenda is a political liability.

Last Thursday, the Michigan LCV team hosted “Happy Hour for the Environment,” a small fundraising event at Ann Arbor’s Island Park! Attended by Michigan LCV staff and board members, as well as University of Michigan faculty and staff, the evening was a fantastic opportunity to meet new people, make connections, and talk about the amazing work our organization is doing to advocate for and protect Michigan’s air, land, water, and democracy. 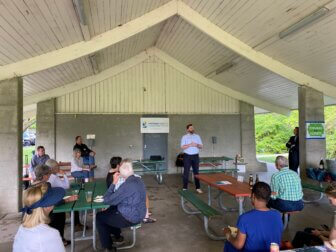 Now more than ever, Michigan LCV’s work on climate action is extremely important, especially as California is in the process of drafting a climate plan similar to the MI Healthy Climate Plan unveiled in late April. After the California Air Resources Board (CARB) released its 2022 Climate Change Scoping Plan draft two weeks ago, climate advocacy groups in the state have been vocal about how the plan falls short, specifically when it comes to reducing carbon emissions.

Unlike the MI Healthy Climate Plan, California’s draft climate plan focuses heavily on carbon capture technologies and strategy, which means that fossil fuel emissions will not be curbed to the degree that is required for substantive climate action. By focusing on carbon capture instead of carbon reduction, the California plan would allow fossil fuel corporations to continue to produce harmful emissions and air pollution that will continue to disproportionately impact low-income and minority communities.

While the final version of the California climate plan and how robust it turns out to be remain to be seen, the quality and strength of the final MI Healthy Climate Plan is a testament to Michigan LCV’s work in advocating for bold climate action. The Michigan LCV team was instrumental in making it as robust as it turned out to be, capitalizing on the months-long period for public input to create a chorus of voices of Michiganders calling for the plan to be strengthened. As a result, the final plan was made much more robust, and by implementing the carbon reduction strategies, can provide Michigan with the roadmap we need to achieve carbon neutrality by 2050.