What if I told you there was a number that some experts have called “the single most important number for thinking about climate change,” and then I told you that a federal judge (a Trump pick) just blocked the Biden Administration from using that number in their policies across all agencies – how would you feel?

If you said “I would feel concerned bordering on alarmed,” I would say “you’re not alone.”

The number (or calculation) is known as the “social cost of carbon,” which is basically the cost of the damages caused by one extra ton of carbon dioxide in our atmosphere. This calculation is essential to the federal government’s rules and regulations because: 1) it’s important to understand the costs and benefits of those policies, and 2) this type of analysis is required under federal law (the National Environmental Policy Act, or NEPA, aka the “Magna Carta” of environmental laws).

So if federal agencies can’t use this updated cost figure (even temporarily), what will that do to the governmental rules that are critical to safeguarding public health and the environment?

The ultimate answer probably depends on how it plays out in the courts, but for now, the consequences appear to be sweeping. Already, the Biden Administration has identified a number of proposals, programs, and projects that would need to be significantly delayed or revised.

Here are just a couple examples of delays to existing standards and projects that directly benefit Michiganders (as identified by the White House Office of Information and Regulatory Affairs):

While project delays and regulatory uncertainty is undesirable, there is a longer-term, more insidious threat: a judicial decision that would force agencies to return to an old and outdated calculation of the social cost of carbon, which could weaken critical climate regulations that would tackle the climate crisis, or even prevent them from being finalized in the first place.

Although the Build Back Better Act has all but stalled in the Senate, the Michigan LCV team continues to keep up the push for bold climate action by Congress to address climate change. 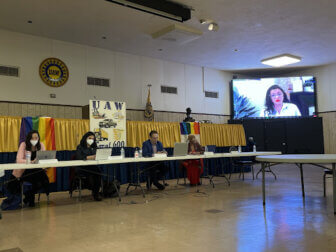 The panel discussion centered around the intersections of climate change, citizenship, paid leave, and bold climate action at the federal level, with lawmakers explaining why they believe now is the time to take action to protect our communities and meaningfully address the climate crisis.

You can check out a recording of the event here.

The Michigan LCV team will be sure to keep you updated and aware of upcoming climate action events, so stay tuned for ways to plug in moving forward!