Historic Drought: Unprecedented drought – yet another sign of our changing climate – is drying up European rivers, blocking trade routes and ending summer river cruises early. On the Danube River water levels have gotten so low that sunken Nazi warships are resurfacing, an apt metaphor from the past as one Twitter user points out, while the impacts of climate change continue to become more evident. 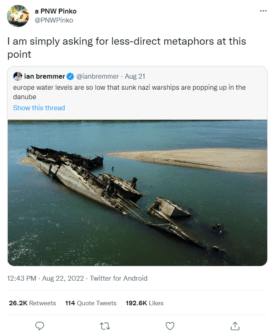 More Climate Warning Signs: This week, Dallas, TX was hit with “an entire summer’s worth of rain in 24 hours,” flooding major highways and stranding hundreds of motorists in the same type of precipitation event we saw in Detroit last summer. Meanwhile, China is experiencing the “strongest heatwave since the complete meteorological observation record existed” as temperatures have hit 45 degrees Celsius in some cities for consecutive days. Both climate events are examples of what lies ahead without bold climate action across the globe. 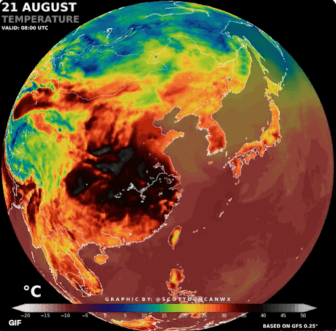 Satellite image of record-high temperatures in China on August 21 (Credit: @ScottDuncanWX via Twitter).

California to Put ICE Vehicles On Ice: The California Air Resources Board (CARB) will vote tomorrow on a measure that would prohibit the sale of new gasoline cars by 2035 and would set interim quotas for zero-emission vehicles between now and then. With California representing a huge share of the vehicle market, this measure will drive forward increased electric vehicle options by automakers  – which will hopefully become more affordable with time.

Executives working at Enbridge Energy, the Canadian oil pipeline giant, probably popped some champagne this past week – but their celebration is (hopefully) premature.

A federal judge decided that Attorney General Dana Nessel’s case to shut down Line 5 should be heard in federal court – denying the State of Michigan’s efforts to have the case heard in state court (where Nessel’s case was originally filed). Enbridge views this jurisdictional decision as improving their chances to keep the old, damaged pipeline pumping oil through the Great Lakes. With the potential for the current U.S. Supreme Court – the same court that gutted EPA authority earlier this year – as the final decision-maker. 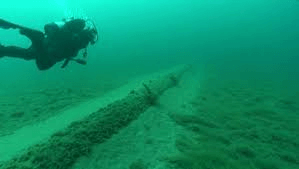 Enbridge’s Line 5 pipeline runs through the Straits of Mackinac, one of the most ecologically sensitive areas in North America, where current speeds exceed those of Niagara Falls. An oil spill in the Straits would impact more than 700 miles of Great Lakes coastline (Credit: National Wildlife Federation).

It’s unclear whether the Attorney General will appeal this decision, but the fight to prevent a Line 5 oil spill is far from over. Even if it continues to move forward in federal court, the case will still be argued on the merits, and the state’s attorneys will have a lot to say about how Line 5 is a ticking time bomb and should be shut down. Importantly, there is also a separate Line 5 case in Wisconsin, brought by the Bad River Band, to kick Enbridge off of their reservation land for operating Line 5 (negligently, I might add) after their easement permissions expired years ago.

Regardless of the outcome of this particular legal process, the decision last week highlights a few important dynamics to watch:

Michigan LCV will be closely monitoring and reporting on these developments and more, so stay tuned. In the meantime, check out our newly updated fact sheet on Line 5 for more information and answers to frequently asked questions.

Michigan LCV was on the ground Monday in Detroit for a rally at the Michigan Public Service Commission (MPSC) hearing. The rally, organized by the Defend Black Voters coalition, was an enormous success as more than 200 people turned out to voice their opposition to DTE Energy’s forthcoming Integrated Resource Plan (IRP), which will decide the corporate utility’s plans for transitioning towards renewable energy sources and energy rates for the next five years. 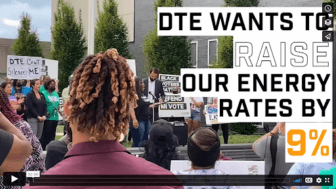 Watch our video recap of Monday’s rally and hearing here>>>

The rally and hearing were also attended by Congresswoman Rashida Tlaib and State Representatives Yousef Rabhi and Laurie Pohutsky, each of whom made impassioned speeches about different aspects of DTE’s proposed IRP and why the utility must be held accountable.

In addition to having a horrible track record when it comes to service and charging astronomically high energy rates, it was discovered this year that DTE has made significant donations to radical politicians in Michigan that are actively seeking to make it harder for Black, Brown and Indigenous communities to make their voices heard by restricting access to the ballot box.

The MPSC is expected to announce its decision on DTE’s proposed IRP by November of this year.

Click here to send a message to the DTE urging the utility to commit to a fast, equitable transition to clean energy and help us fight the climate crisis.