Disaster in Midland, Important Webinar re: The Task Force on Racial Disparities related to COVID-19, and Legal Battles re Line 5

Welcome to the May 28th edition of Three Things Thursday.  I hope this message finds each and every one of you safe and healthy. As I mentioned last week, we are now posting my weekly updates on our website in the news section. You can read the latest Three Things, as well as updates from past weeks, at https://michiganlcv.org/article-type/threethings/.

Now, onto this week’s Three Things…..

1. The disaster in Midland

Last week Midland County fell victim to a breach in the Edenville dam, which led to horrific flooding and the displacement of thousands of people in the midst of a global pandemic.

Not only does this disaster put a spotlight on aging infrastructure (notably high hazard dams, which can be found throughout the state), but it calls attention to the dire need for climate change preparation and resiliency.  Indeed, the dangers posed by our changing climate, and the increasing frequency and severity of extreme weather events, puts added pressure on an already stressed built environment.

Most of our infrastructure — the roads, dams, bridges, hospitals, airports, harbors, power plants, pipelines, businesses, storm sewers and homes — was built for a planet that no longer exists. Climate change is not something that will only take place in the future. The climate has already changed in large because of human actions, and the sooner we recognize this and adapt, the better.

On Thursday, during a conversation with John Flesher of the Associated Press, I also called attention to the need for transparency from Dow Chemical Co. given its long legacy of polluting the Tittabassee River.  At this point, much–if not all–of the reporting related to Dow’s holding ponds and the Superfund site associated with industrial and chemical pollution is coming from Dow, itself. Knowing that the flooding could spread pollution into the surrounding community, I encouraged Flesher to dig into the story and push for full disclosure from the company responsible for much of the area’s toxic legacy. Flesher included my comments in his article, which was posted and printed in numerous publications around the country, including the New York Times.

Yesterday, Governor Whitmer held a press conference where she announced an investigation into the failure of the two Midland-area dams and urged environmental officials to find solutions to prevent future disasters.

As the media, along with local, state and federal officials, continue to get a handle on this challenging situation, we intend to maintain our focus on the connection to climate change, while also calling for full transparency on the part of the corporation, pushing Dow to do an assessment of the contamination and it’s potential spread. No matter the cause of this disaster, Dow must be held accountable for cleaning up the toxins they created.

Yesterday, the Michigan LCV team proudly hosted our 12th event in our People Planet Public Health webinar series.   We were honored to be joined by two amazing guests — Lieutenant Governor Garlin Gilchrist and Sierra Club’s Environmental Justice organizer, Justin Onwenu — for a discussion about Michigan’s Coronavirus Task Force on Racial Disparities, which was created by Gov. Gretchen Whitmer given the disproportionate impacts COVID-19 is having on black and brown communities. 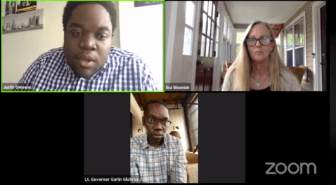 We know that decades of pollution in many Michigan communities have caused high rates of asthma, lung and heart disease and other increased risk factors for COVID-19. The Task Force’s mission is to investigate these disparities and find solutions to not only address these problems amidst the pandemic, but to come up with long-term resolutions.

Both the Lt. Governor and Justin were amazing guests.  The Lt. Governor not only answered questions with depth and authority, he did so while acknowledging the personal loss of over 20 people in his life to COVID-19 and juggling parenthood — his beautiful baby daughter was an unexpected special guest by his side throughout our conversation.

Justin’s expertise in environmental justice was on full display through his compelling powerpoint on this subject, and his compassionate, determined responses to the questions posed in the latter part of the program. As noted by the Lt. Governor, Justin was named by Crain’s Detroit as one of their (outstanding) 20 in their 20’s this year, and — just today– Justin’s fine equity work in Detroit was profiled in the New York Times in an article entitled, “Where Coronavirus Help on Facebook Is ‘Inherently Political’.  The article begins like this:

The three young idealists met before this all started, when the most pressing issues they faced were climate change, environmental justice and ensuring clean water for Detroit residents. They were all organizers of a sort: eager to do the unglamorous work of convincing people that they could dream bigger, and demand more from their government.

Our webinar garnered more than 130 participants on Zoom and hundreds more on Facebook Live. If you didn’t get a chance to tune in, you can view a recording of the webinar, and all of our past webinars on our Facebook page here.

Last Friday, the Michigan Office of Attorney General Dana Nessel laid out a very compelling case to decommission the Line 5 oil pipeline in the Straits of Mackinac…over a Zoom video call, no less.

Opening oral arguments in the People of Michigan v. Enbridge in Ingham County court began on May 22nd and a team of attorneys from the Attorney General’s office took a strong stand to protect our public waters in the lawsuit to decommission Line 5 after years of pushing and advocacy from people and groups across the state.

The Attorney General’s office ran through several claims as laid out in their briefs before the court, explaining how Line 5 poses an inherent (and catastrophic) threat to the Great Lakes, which the State holds in public trust for the people of Michigan, among other arguments. We will be watching this proceeding closely as it goes forward, along with several other Line 5 legal actions including Enbridge v. Michigan, which will hear oral arguments next Wednesday, June 3rd in the Michigan Court of Appeals.

Just yesterday we were reminded of Line 5’s poor condition and Enbridge’s ongoing failure to properly maintain the 67-year-old pipeline.  It was reported by the Associated Press that Line 5’s protective coating has worn away in at least four (4) spots. If you’re having deja vu, you’re not alone — gaps in the coating have been discovered many times before. In almost every instance, these coating issues have been discovered as Enbridge engages in work to repair portions of the pipeline. In this case, the company was in the midst of repairs to the supports for the pipeline along the bottom of the Straits.  If these repairs had not been underway (an ongoing challenge with this antiquated infrastructure) would state officials, the media and the public have even been made aware of the coating problems?  There’s a question that will never be answered.

Let us all remember that, according to the easement agreement the company has with the State of Michigan, Enbridge may not have bare patches of metal in contact with the water (which can lead to corrosion), yet this has happened multiple times and, to date, we have not seen Enbridge held accountable, nor their easement revoked, by the State.

For the sake of our majestic Great Lakes, our drinking water, and the health of inland waterways and human beings located adjacent to Line 5 as it traverses through Wisconsin and the Bad River Indian Reservation, the Upper Peninsula, the Straits of Mackinac and the Lower Peninsula,  we can not afford to wait years and years for an alternative to Line 5.  The antiquated, dangerous Line 5 continues to deteriorate every single day.

The Attorney General and her team deserve a big “thank you” for continuing to push forward their case to enforce existing law and remove this aging infrastructure, which is a dire threat to our people and planet.*

As I say every week, thank you so much for your trust. This team has never worked harder than we are right now, in the midst of this pandemic. Thank you for making our work possible.

Until next week, please stay safe and healthy…

P.S. Attorney General Nessel deserves many “thank yous” for her tenacious work to protect our air, land, water and public health. Just yesterday, our AG joined a coalition in filing a lawsuit against the Trump administration’s severe rollback of clean emissions standards for vehicles.  Thank you Attorney General Dana Nessel!

P.P.S.  On the toxic PFAS front, there’s an important article in the Detroit Free Press today entitled Restrictions expanded near former Wurtsmith air base after PFAS found in most wildlife. Here’s a clip:

Anthony Spaniola, a Troy attorney whose family has for decades owned frontage on PFAS-tainted Van Etten Lake near the former Wurtsmith base, and who has become an outspoken critic of the Air Force’s response to the contamination, said a sizable segment of the population in the Oscoda area lives below the poverty line.

“I do know people rely on food from that area for sustenance,” he said. “We’re dealing with the Air Force. We’re trying to say, ‘Clean this up, and clean this up quickly.’ “