Welcome to the June 30, 2022 edition of Three Things Thursday. It’s been quite a week since I last wrote.  My head is spinning and the emotions I have felt over the past 7 days have ranged from deep rage to extraordinary gratitude. I know I’m not alone.  This week’s Three Things covers the highest court in the land: the Supreme Court of the United States (SCOTUS); why our state elections matter more than ever and an example of what Michigan LCV is doing to make a difference; and a beautiful day spent in the Ortonville/Clarkston area with a great group of birders.

This morning, the Supreme Court released its decision in the case of West Virginia v. EPA, a case over the Environmental Protection Agency’s ability to regulate greenhouse gas emissions. In striking down EPA authority, the Court delivered a major blow to the federal government’s ability to regulate carbon emissions and fight climate change, a decision that may well extend to other federal agencies. In one scenario, today’s ruling could effectively limit federal agencies’ authority to regulate anything.

In response, Michigan LCV issued a statement condemning the decision, particularly at a time when the world’s carbon dioxide levels are the highest ever recorded in human history and climate experts continue to call for urgent action to address the climate crisis. Here is the quote from Michigan LCV’s Federal Government Affairs Director Bentley Johnson:

Leading climate scientists are sounding the alarm bells to act faster in addressing the climate crisis, but here is our far-right, activist U.S. Supreme Court taking us backwards and undermining the ability of the U.S. Environmental Protection Agency to do its job. Big Coal and Oil have routinely put profits over the health of communities across Michigan, disproportionately burdening communities of color with dangerous pollution. The court’s decision today only creates more uncertainties for our future.  But we are not giving up, and will continue to fight at the state and federal levels to pass bold climate legislation to reduce pollution in our air and water and rapidly expand the use of clean, affordable energy sources here in Michigan and beyond.”

You can read the entire statement here.

In the wake of the SCOTUS decision, the Michigan LCV team has rolled up our sleeves. We are more committed than ever to address the climate crisis via action at the local, state and federal levels. If we (collectively) didn’t know it before, we know it now: we must compel Congress to pass critical climate legislation and put pressure on the Biden administration to pursue even more aggressive, impactful executive actions within their authority.  We must also ensure that Governor Whitmer’s recently adopted MI Healthy Climate Plan is fully implemented from both an executive and legislative perspective. And, we must encourage and compel local units of government to take action, not unlike the work being done in places like Oakland and Washtenaw Counties to tackle carbon emissions.

Last Friday’s Supreme Court decision to overturn Roe v. Wade, turning the question of reproductive freedom to the states, has been front and center on everyone’s minds for the past week. I was in Washington, D.C. when the decision was released – I had traveled there earlier in the week to attend the national LCV board meeting (I’ve been a proud member of the LCV Education Fund board for more than 10 years) and to visit my beloved family members.  While the Dobbs decision had been anticipated, nothing prepared us for the impact it would have.

As a woman who believes that I should have autonomy over my own body, and as a leader who is deeply committed to protecting human health and working towards true justice and equity in this nation, I was rocked to my core by the decision. I thought of the women across this nation who fought so hard for the passage of Roe v. Wade. I thought of the women who died before they had access to safe care, and I thought of thousands of women who will die in the days, months and years ahead, most of them on the lower end of the economic spectrum, unable to travel to access the care they need and deserve. And I thought of incredible women like Helen Milliken who worked tirelessly for women’s rights, including reproductive freedom and the passage of an equal rights amendment (ERA), which we still (obviously!) do not have in the United State of America.

I had the chance to visit with Governor and Mrs. Milliken a number of times in their home in Traverse City… I can only imagine what they would be thinking now as the highest court in the land runs roughshod over the very essence of what they loved and dedicated their lives to: protecting our beautiful planet and working for true gender equality.

Carrying the women I admire so much in my mind and in my heart –Helen Milliken, Justice Ginsberg, Governor Ann Richards, Bell Hooks, Grace Lee Boggs and so many more – I went downtown to the Supreme Court.  I wanted to be there to voice my rage, to be with other women who, like me, know that more than 80% of Americans believe in a woman’s right to make her own decisions about her own reproductive care. 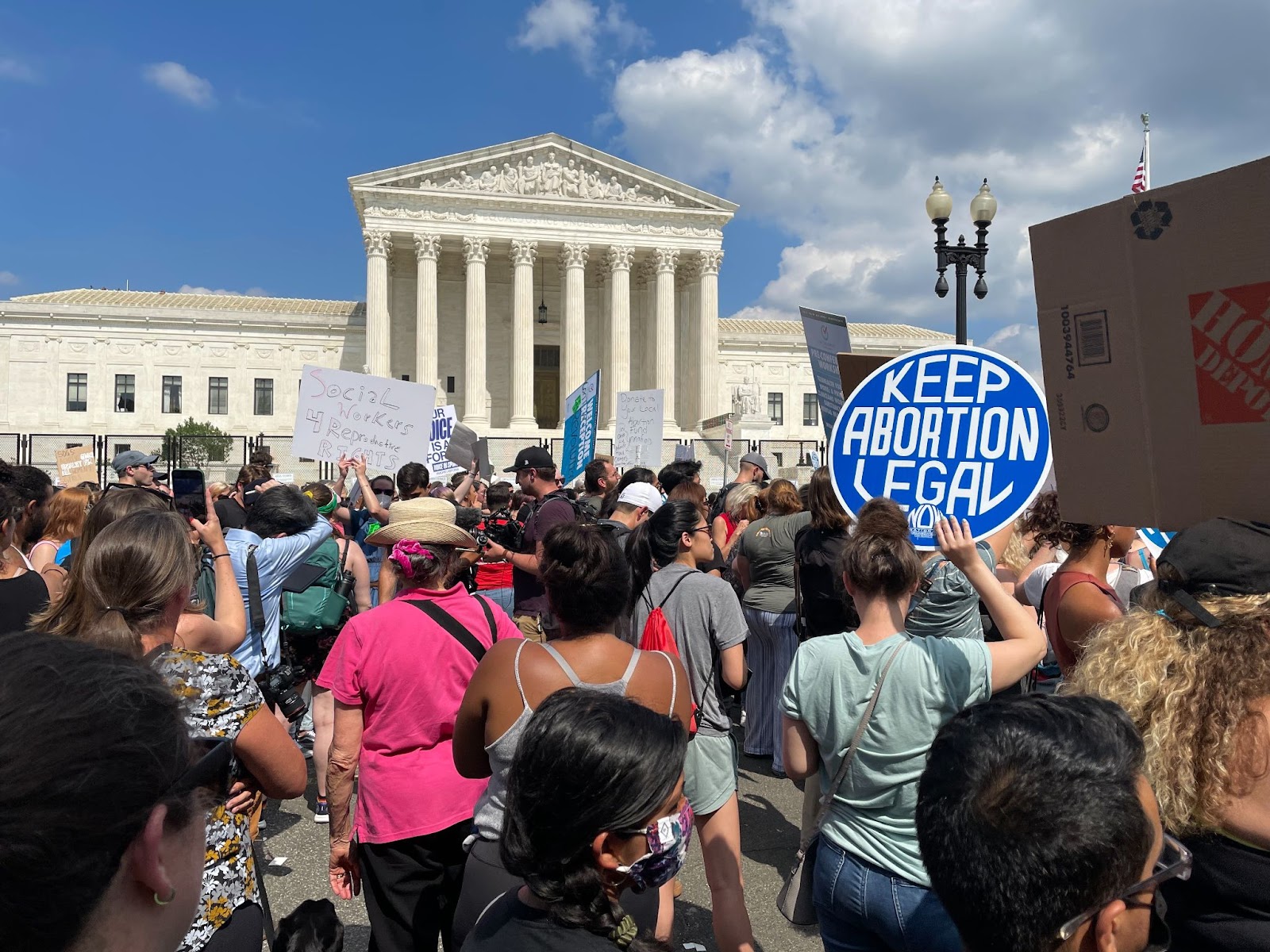 Over the past week, it has become crystal clear that the Supreme Court’s assault on constitutional rights and legal precedent has not been limited to the issue of reproductive freedom.  If you haven’t read Justice Elena Kagan’s dissent (in which she was joined by Justice Stephen Breyer and Justice Sonia Sotomayor) in W. VA v, EPA, I encourage you to do so.  She writes (in part):

Whatever else this Court may know about, it does not have a clue about how to address climate change….And let’s say the obvious: The stakes here are high. Yet the Court today prevents congressionally authorized agency action to curb power plants’ carbon dioxide emissions. The Court appoints itself — instead of Congress or the expert agency — the decisionmaker on climate policy. I cannot think of many things more frightening.”

As we all digest the decisions coming out of our nation’s highest court, it is imperative that we find our footing and realize that each and every one of us has a voice that needs to be heard.  In the near term, there are two ballot initiatives that I encourage you to support, with signature deadlines right around the corner (next week):

We then have a primary election in August, which I encourage you all to participate in. (NOTE: all Michigan LCV-endorsed candidates are on our website, if you’d like to check them out. ) And, we have an election of immense importance in November. If you’d like to get involved in any of our work to elect lawmakers across the state who share our values, please let me know. There are a whole host of things that you can do –in addition to voting–that can make a big difference….which leads me to Thing Two….

2. Michigan LCV: out on the doors for Jennifer Conlin

On Monday, the Michigan LCV team went out in full force to knock on doors for Michigan State House candidate Jennifer Conlin.  As you may know, Jennifer is running in Michigan’s newly drawn House District 48, which runs from Ann Arbor north into the Brighton/Pinkney/Howell area. It’s a real 50/50 district.  Jennifer – who was born and raised in the district – is deeply dedicated to the protection of our natural resources and community health. 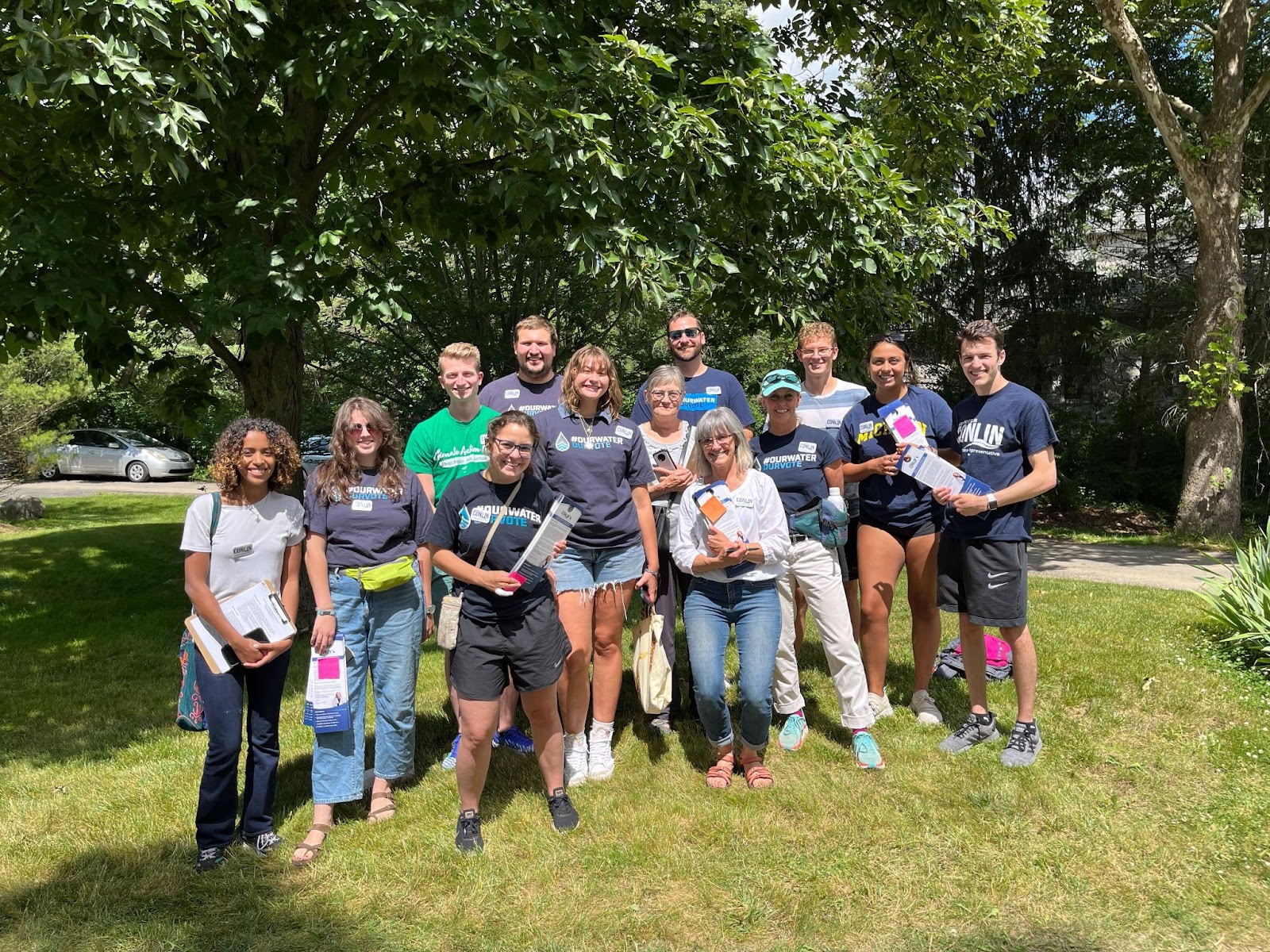 The Michigan LCV team at Monday’s canvass for Jennifer Conlin in Washtenaw County!

As part of our coordinated campaign efforts focusing on endorsed candidates for the 2022 election cycle, Monday’s canvass was an opportunity for our team to get out into the community, knock doors, and talk to voters about Conlin’s candidacy and the important environmental issues at stake this election year. 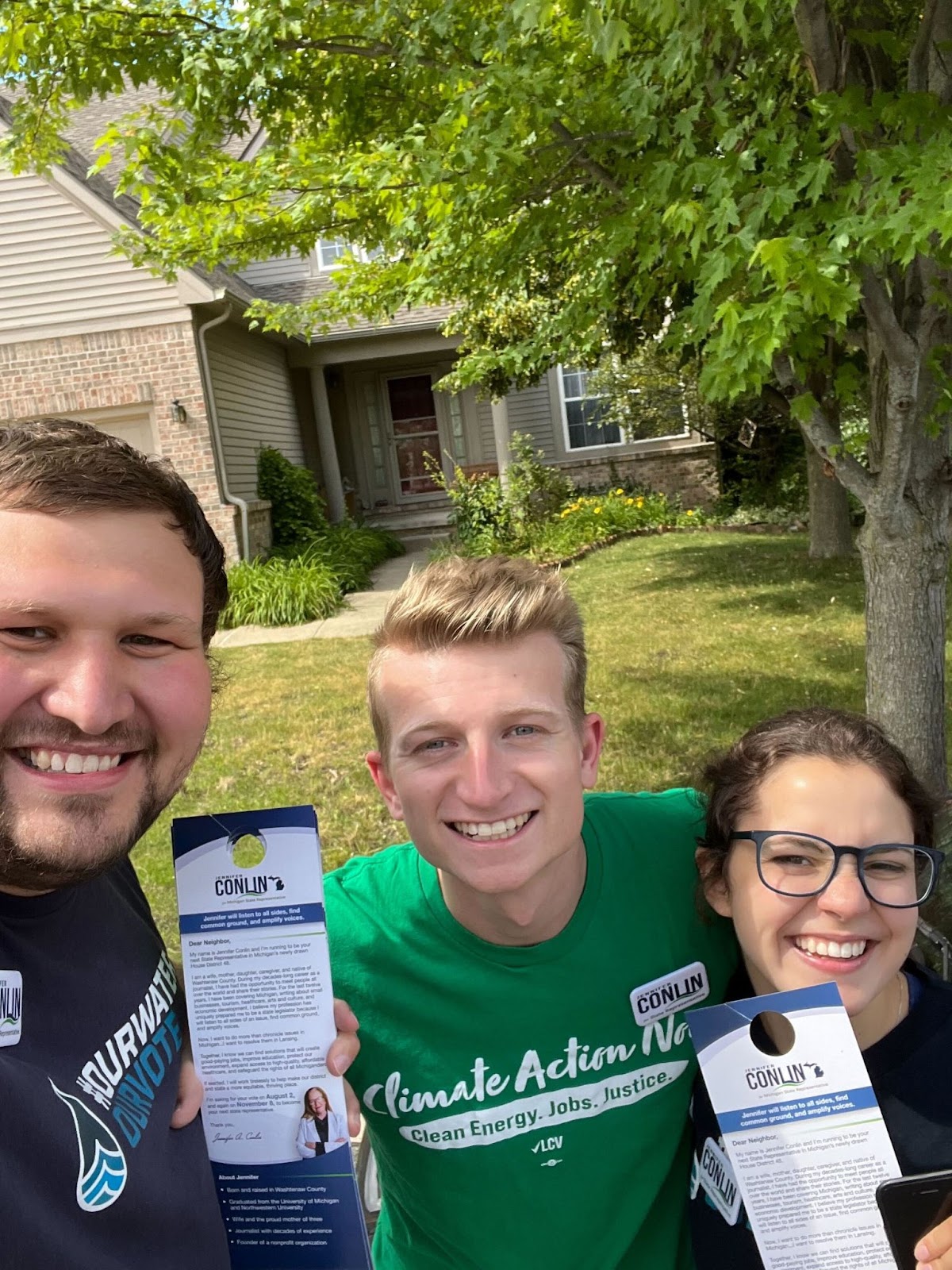 In total, our team was able to knock on almost 400 doors, sharing information about Conlin’s candidacy and what she will bring to the table in Lansing as a clean drinking water champion. 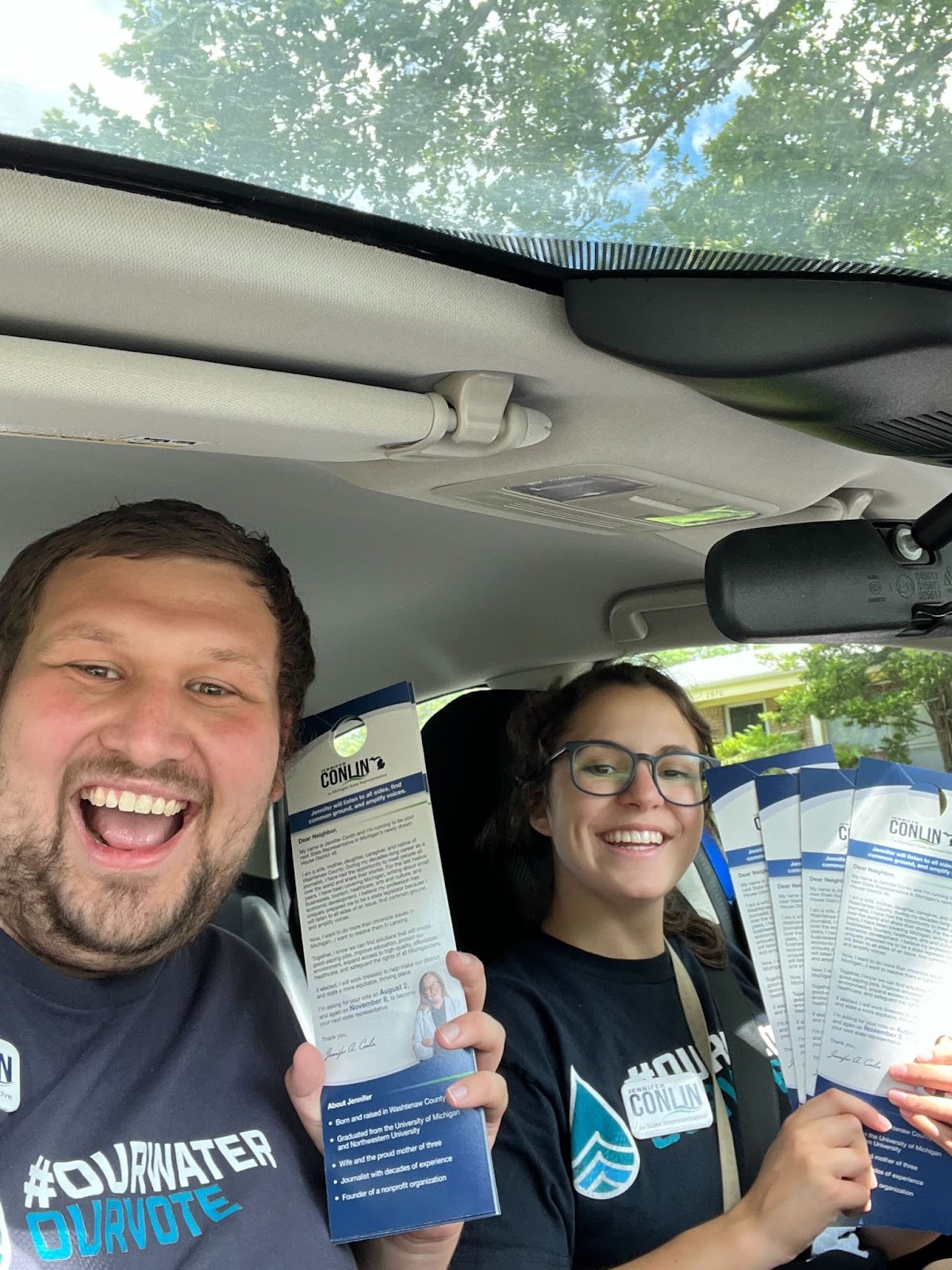 Ethan and Hallie showing off some Conlin literature!

I will keep you posted about our coordinated canvassing efforts as they continue to ramp up throughout the rest of the summer. We’d love to have you join us!

3. A great antidote to frustration and rage…

I was recently introduced to one of the most wonderful human beings ever, Bill Haney, a man who truly epitomizes the term “a gentleman and a scholar”.  Bill has lived an extraordinary life and done amazing things, and still does. My colleague Suzanne and I were fortunate to partake in a couple Bill’s most recent passions this week: I was a guest on Bill’s Independence Television show, which is called “Conversations with Bill”  (the show that will air in a few weeks); and we were special guest speakers at Backyard Birders Club, which holds monthly meetings at the Wint Nature Center.  The Backyard Birders established themselves about four years ago and in that short time they have grown from 18 to 180 members!

As Suzanne and I prepared for the meeting, we weighed the best ways to talk about our work with a group of passionate birders. We decided climate change and water contamination issues would be most pertinent, and they were. But they were far from all this engaged, committed group of people wanted to discuss!  We got questions about mercury pollution, Nestle’s water bottling operation in West Michigan, Enbridge Energy’s damaged and dangerous Line 5 oil pipeline, the W. VA v. EPA Supreme Court decision (which was pending at that time), clean energy legislature, and much, much more.

It was such a pleasure to be with the Backyard Birders. I learned about the Merlin app (check it out for bird identification!) and all the beautiful birds sighted and heard in the Ortonville/Clarkston area. I was also reminded about how important community is, especially at this time when it may feel like our country is falling apart, divided and polarized in so many ways.  The Backyard Birders exuded kindness and compassion, along with their shared passion for ornithology. I felt so lucky to be there and so grateful.

Until next week, thank you for your ongoing support of our work. It truly takes a team, and you are very much a part of it. Be well, be safe….