Welcome to the July 9, 2021 edition of Three Things Thursday! With the Michigan Legislature on recess, this week’s issue of Three Things focuses on President Biden’s visit to Northern Michigan over the Fourth of July weekend, an update on the Michigan LCV team’s continued State-Federal climate work (think TV ads, webinars with members of Congress and more), and the re-launch of Michigan LCV’s Green Gavels accountability tool, which rounds out our Digital Accountability Suite with a look at the Michigan Supreme Court.

Before diving into this week’s Three Things, I want to take a moment to highlight some awesome work our team has done within Michigan LCV Education Fund.

Over the past several months, a cross sectional group of staff members has been hard at work to overhaul and upgrade our Michigan LCV Education Fund website. Now, after many rounds of edits and design tweaks, we are proud to announce the launch!

The new site will help elevate and highlight all of our education and community-based work surrounding climate change, protecting our water and ensuring our democracy works for everyone. With the addition of our Democracy For All team last year — a talented team that  focuses on voter engagement, education, and advocacy around voting rights and our democracy — the new site was needed to better represent our mission, vision and programs.

I encourage you to check out the new site here.

Also, if you haven’t seen the NYT article published yesterday entitled A Battle Between a Great City and a Great Lake, it’s a must read.  This provides a clear rationale for all that we are doing to ensure the climate crisis is a core part of the American Jobs Plan.

Last weekend, President Joe Biden visited Northern Michigan to take in the sights, sounds, and some delicious cherry pie! Well, that’s true, but the President’s visit, coinciding with the Fourth of July holiday, came one week after the Metro Detroit area got more than two months of rain in just one day — eclipsing totals from the last major flooding event in 2014 — and included powerful conversations with farmers who have been hit hard by our changing climate.

The flooding in SE Michigan was definitely part of the President’s visit, with both Governor Whitmer and Detroit Mayor Duggan advocating for federal emergency relief for the thousands of residents hit hard by the storms.  Submerged vehicles and water-logged basements are a stark reminder of the accelerating effects of climate change and the disproportionate impact climate-related events have on low-income and minority communities. It was also a loud wake up call re: the desperate need for meaningful investments in our state’s failing infrastructure.

For a detailed look at the flooding in Detroit, Dearborn and the surrounding communities, and how it relates to our work at Michigan LCV, I encourage you to read last week’s edition of Three Things Thursday, which includes a story about my drive to the eastside of Detroit in the early morning hours following the storms.

After the Biden administration introduced its American Jobs Plan several months ago, which aims to invest trillions of dollars to overhaul transportation, water, and clean energy infrastructure in an effort to tackle the climate crisis, as well as create thousands of jobs, the President’s visit to the Traverse City area was an opportunity to illustrate why Michigan sorely needs these investments to ensure the health and safety of our communities.

While in Northern Michigan, President Biden visited Kings Orchards in Central Lake, MI. President Biden heard directly from the Kings how climate change is impacting their business. Due to droughts and unexpected freezing conditions early in the growing season, the Kings told the president that they expect to yield only 15 percent of their tart and 25 percent of their sweet cherries this year.

In addition to challenged cherry crops, the President was also reminded of the ticking time bomb that sits at the heart of the Great Lakes — Line 5– which not only puts Michigan’s tourism economy and hundreds of thousands of jobs at risk, but jeopardizes the drinking water of millions in the region and is directly linked to the climate crisis. While the Biden administration has taken action to shut down other pipelines across the country, the President has not intervened here.  Given that the ultimate authority pertaining to Enbridge’s easement lies with the Governor (which Enbridge is challenging in the courts), the President heard clearly that we still need meaningful action at the federal level (i.e. a statement from the Administration confirming the state’s authority)  to ensure that our Great Lakes economy, our freshwater resources, and our way of life in Michigan remain untarnished.

The Michigan LCV team followed the President’s visit closely last weekend, and continues to work diligently with state and federal partners and elected officials to build support for the American Jobs Plan and action on climate change and infrastructure investments that will protect our water and put us on track towards a clean energy economy. Although news of the President’s visit came on short notice, Michigan LCV ran a series of digital ads under the theme of “Save The Cherries,” linking extreme weather and climate change to the diminishing yields of cherries and livelihoods of farming communities in Northern Michigan (more on this in a moment), reaching thousands of people attending Traverse City’s annual National Cherry Festival. 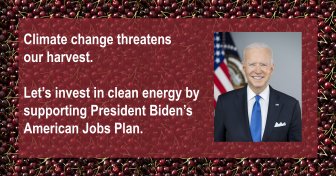 While both Congress and the Legislature are on recess, the Michigan LCV continues our work to build support and momentum for the Biden administration’s American Jobs Plan and the need for serious investments in infrastructure, job creation, and clean energy innovation as we look to tackle both the water and climate crises we are experiencing dramatically in Michigan.

Since March, our layered, focused campaign has been aimed at bolstering support for the Biden administration’s sweeping agenda, as well as support for our congressional leaders in order to get these investments across the finish line, highlighting the urgency for immediate action on drinking water contamination and much-needed investments in energy and water infrastructure.

In our efforts to see the Biden administration’s vision completely enacted, the Michigan LCV team and our partners at the state and national level are determined that any legislative deal in Washington must include real climate action. Our collective efforts have centered around building support for job creation, protecting public health and our economy, and prioritizing low-income and minority communities most impacted by the effects of climate change, failing infrastructure and toxic pollution.

On Tuesday, as part of a $10 million paid media effort, our partners at national LCV and Climate Power launched a coordinated broadcast, cable, and digital aid campaign across 16 states in support of key congressional members. In Michigan, the ads are targeted in Congresswomen Elissa Slotkin (MI – 08) and Haley Stevens (MI – 11) districts and are focused on support for an American Jobs Plan deal that includes key infrastructure investments in tandem with climate action.

The Michigan LCV team played a key role in announcing the ad campaign, issuing a statement, which you can read here.

I also invite you to check out our partner, Climate Power’s, ads, which are running on cable television  and in Washington, D.C.. The “I Can Do That” and the “Time Is Now” ads are fantastic!

In addition to the ad campaign, our partners at LCV have deployed teams of organizers for an on-the-ground campaign in both CD-8 and CD-11 to bolster support for Reps. Slotkin and Stevens and their work to realize the vision of a sweeping infrastructure and climate plan. If you would like to show your support of this important work, you can order a free yard sign or a sign to hang in your business. Please fill out this survey if you would like to receive a sign!

Here are just a few ways the Michigan LCV team continues to work to get an American Jobs Plan that includes substantive climate action across the finish line:

As you know, our work at Michigan LCV centers around both electing leaders to office who will be champions for our air, land, water, public health, and democracy and then holding them accountable for their votes and actions once they take office.

I’m delighted to say that this week marks the official re-launch of the Michigan LCV Green Gavels accountability tool. Green Gavels was first launched in 2021, scoring Michigan Supreme Court justices on their rulings on environmentally-related cases heard in our state’s highest court. The re-launch this week not only updates the tool in relation to air, land and water decisions, but includes decisions pertaining to voting rights and the preservation of our democracy.

In partnership with the University of Michigan Law School and a review panel made up of expert attorneys, our team has scored cases and justices to provide an easy-to-understand, updated, and nuanced look at a critical branch of government often considered too complex and out of reach for the layperson.

Another big week in Michigan LCV land! Thank you as always for all you do to support our work!

Over the last several months, our Communications Team has done a fantastic job of tracking and summarizing our work in the form of upbeat, engaging recap videos. From the protection of drinking water and tackling the climate crisis to keeping track of Michigan’s nonpartisan redistricting commission–it’s all summarized in an interesting, fun and engaging way.  I invite you to check out the June recap here!