Welcome to the December 17th edition of Three Things Thursday. This week’s edition focuses on the grand finale of the 2020 elections, the fifth anniversary of the Paris Climate Accord, and President-elect Biden’s upcoming cabinet decisions.

1.The election is (finally) secured for President-elect Biden

“I mean, seriously, I’m starting to lose count how many times Joe BIDEN has won Michigan.”

– Rep. Mari MANOOGIAN (D-Birmingham) on Twitter after the U.S. Supreme Court threw out the state of Texas’ lawsuit against Michigan and three other swing states over claims that voter fraud altered the election results.

On Monday, Michigan’s 16 electoral college delegates cast their votes for Joe Biden for president.  In most prior election years, casting these votes has been timely, efficient and lacking in fanfare.  This year was a very different story. Given credible threats on the lives of the electors by those disgruntled with the election results and egged on via Twitter by the current occupant of the White House, the Michigan Senate and House offices were closed on Monday, and the delegates were escorted into the Capitol by state police.

Despite the tense situation, the delegates did their job, allowing Michigan and the nation to move on, beyond the drama of the 2020 elections and on to the nominations of cabinet members in the new Biden/Harris administration.

I know I’ve mentioned this in week’s past, but the Michigan LCV Ed Fund team played an essential role this year, through our Democracy For All program, in ensuring the elections in this important Great Lakes state were safe and secure and that voters had all the information they needed to cast their votes, whether at home or at the polls.  Indeed, our team was responsible for approximately ¼ of all the voter education and mobilization efforts that took place across the entirety of the statewide pro-democracy voter engagement community (23% of the 5.99 million dial attempts made by 60+ organizations). This is what we did:

We also ran a highly effective poll worker recruitment program–one of the best in the nation!  This included:

We are incredibly proud of what we accomplished this year. As we turn the corner into 2021, we are more dedicated than ever to ensuring Democracy for All. We know there’s much more work to be done to ensure increased voter engagement, involvement in the redistricting process, and continued expansion of our clerk engagement program.  Our work is far from over.

2. The Paris Climate Accord and state level action on climate

This weekend marked the fifth anniversary of the Paris Climate Accord.  Nations across the globe gathered (virtually) for what was called the Climate Ambition Summit 2020, articulating ambitious climate goals in the years ahead. The United States was conspicuously and embarrassingly absent from a federal perspective, yet who was present? None other than Michigan Governor Gretchen Whitmer, providing encouraging and visionary words regarding the need to act and sharing details of her recently announced MI Healthy Climate Plan, which aims to achieve 100% carbon neutrality by 2050.

Please know, the Michigan LCV and Michigan LCV Education Fund team has been supporting Governor Whitmer every step of the way. Beginning in October, we:

When leaders step out to do the right thing, it’s so important to support them. We know the work to achieve these goals has only just begun and, to the extent possible, we need the Michigan legislature as partners in making progress.

As for global highlights at the Climate Ambition Summit?  Here are some of the bold goals laid out by other nations:

Over the weekend, President-elect Biden announced that the United States’ absence will soon come to an end, reiterating his commitment to rejoin the Paris Climate Accord on Day 1 of his presidency.  And, the Biden/Harris climate plan would put the U.S. on track to reach net-zero emissions by 2050.

This week brought some exciting pending announcements from the Biden team as they began rolling out their cabinet decisions, a couple of them directly connected to Michigan.

Mayor Pete Buttigieg will be tapped to lead the Department of Transportation (DOT), which is obviously a key position for the state that put the world on wheels, especially as the auto industry moves towards autonomous vehicles and electrification.  This role is critical as we think about mass transit and sustainable communities, pedestrian and cycling traffic, and an overall embrace of the need to address the climate crisis. NOTE: personal vehicles are currently responsible for ⅕ of all US carbon emissions. Dem Presidential Debate in Detroit, August 2019. Seems like a million years ago.

As mayor of South Bend, IN, Buttigieg is practically a Michigander and can be considered one given his husband’s roots in Traverse City. Buttigieg was among a small group of presidential candidates in 2019 who used their platform to bring attention to Line 5, calling for it to be shut down.  This has not been forgotten by the Michigan LCV team, knowing that the Department of Transportation plays an important role in overseeing pipelines, with the Pipeline and Hazardous Materials Safety Administration housed within DOT.

Governor Jennifer Granholm is Biden’s choice to lead the Department of Energy (DOE). As Governor, Granholm spearheaded the effort to adopt Michigan’s very first clean energy and energy efficiency standards (10% by 2010). She also worked to invest in and develop battery storage operations right here in Michigan. Through executive order, Granholm put in place the first environmental justice plan for the state of Michigan and she founded and was chair of the American Jobs Project, a 30-state multi-university research project focused on clean energy jobs and advanced manufacturing. Since leaving office, Granholm has spent significant time in the climate/energy world. On November 7, 2020 Granholm authored this piece for the Detroit News: Opinion: Low-carbon economic recovery a better path for Michigan.

Given the immensely important role the DOE plays in determining the nation’s energy future, having Granholm at the helm signals Biden’s continued commitment to tackling the climate crisis and doing so with an eye to critically important (and complex) states, like ours.

FUN FACT: Michigan LCV spearheaded our first gubernatorial candidate forum on May 20, 2002 in partnership with the Detroit Free Press and Michigan Radio. The forum was held at the then-brand new Brighton High School.  Attorney General Granholm was one of six candidates on stage that evening, along with U.S Rep. David Bonior, former Gov. Jim Blanchard, Lt. Gov. Dick Posthumus, state Sen. John (Joe) Schwarz and Jim Moody (who came out of right field and disappeared shortly thereafter). It was a hugely successful event and included a question about mercury emissions that ultimately led to Michigan’s first rules limiting mercury emissions from power plants. (You will note that the person featured in the linked article is none other than NWF’s Mike Shriberg!)

Gina McCarthy is expected to be chosen as the driver of climate policy for the White House, responsible for leading Biden’s newly formed Office of Domestic Climate Policy. McCarthy served as EPA Administrator from 2013 to 2017 under President Obama and currently serves as CEO of the Natural Resources Defense Council.  As the head of EPA, McCarthy led historic progress to achieve the administration’s public health and environmental protection goals and Climate Action Plan. (See her bio as written on the Harvard Kennedy School website for more detail.)

We had the privilege of having McCarthy keynote a joint Michigan LCV/NWF Action Fund event held last summer.  As McCarthy said that day:

We need leaders who actually lead. That’s why we have to keep

the folks in place who are serving people, and why we have

to look at November as a huge opportunity. 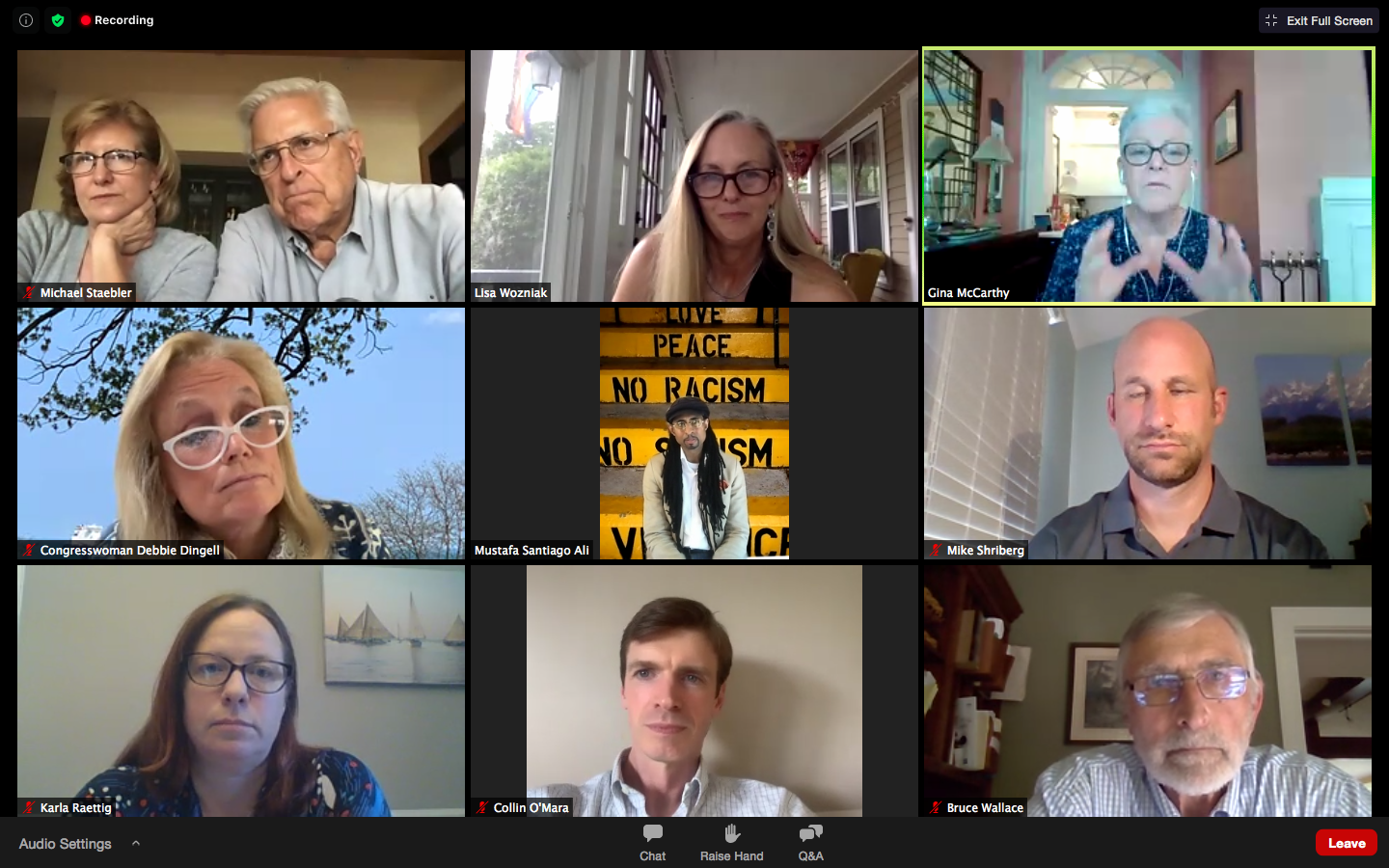 Well, here we go! The Biden/Harris administration is putting people in place who will truly serve the people, which at this point in our national and global history means putting public health, our economy, justice and equity front and center and, in so doing, tackling the existential threats of our time: the climate and drinking water crises.

Thank you all so much for your belief in our work. Please be well and stay safe.

P.S. There is so much good work being done within the environmental community.  Justin Onwenu of Sierra Club and Nick Leonard of Great Lakes Environmental Law Center recently published an article in The Hill about the importance of measuring cumulative impacts of air pollution. It’s entitled: It’s time to change the way we measure pollution

It’s well worth a read. Here’s an excerpt:

“While addressing the legacy of environmental injustice will certainly require greater funding and increased capacity, root causes can be addressed if the EPA works to fundamentally shift the way pollution is measured and regulated. Adjusting the facility permitting process to be more community centered and to account for cumulative impacts of air pollution is a great way to address these long standing disparities.”

“No community should have to suffer increased asthma rates, cancer rates and other health burdens associated with pollution. To this end, the Biden administration’s EPA regulators will have the task of better protecting public health and addressing deeply rooted disparities in every aspect of environmental and climate policymaking.”