Regulating Dangers to Our (and the Planet’s) Health

Asbestos, lead paint, and leaded gasoline. Three examples of dangerous products we have phased out of use for the harm they cause to human health without much resistance from consumers. But some products, like cigarettes – and now gas stoves – are proving harder to regulate despite their negative health impacts.

The Consumer Product Safety Commission (CPSC) recently said the agency could seek to regulate gas stoves because of the danger they present to public health – and the health of our planet. Gas stoves have long been known to increase the risk of respiratory issues, but recent studies show they could be the cause of up to 12.7% of all childhood asthma cases.

The CPSC’s mention of potential regulations – and that the agency could not rule out phasing out gas stoves entirely – caused an uproar from conservative members of Congress and opponents of the Biden administration. And while the White House later clarified there are no plans to ban gas stoves, it was not enough to stop an avalanche of knee-jerk reactions on social media.

The mere mention of potential regulations sent the fringe right-wing into a frenzy, launching a new culture war to protect gas stoves from what they say is an unnecessary overreach. Republican Governor of Florida Ron DeSantis unironically tweeted the following graphics: 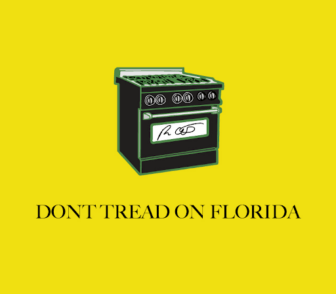 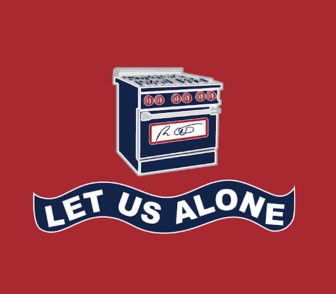 Michigan Congressman Bill Huizenga tweeted out his support for a very recently introduced piece of legislation dubbed the STOVE Act, which would prohibit federal agencies from banning gas stoves. 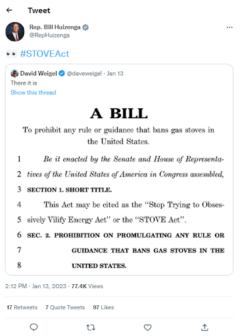 Let’s be clear, this reaction is no nostalgic yearning for home cooked meals on gas stoves, but an intentional propaganda campaign to keep fossil fuels in business. Just last week Governor Mike DeWine of Ohio signed a bill defining methane gas as “Green Energy.” Dark money groups worked hand-in-hand with groups like the American Legislative Exchange Council (ALEC) to pass this latest example of misleading legislation under the guise of climate-conscious thinking.

As coal plants continue to shut down across the country, utilities, governments and consumers are looking for ways to replace that energy. The surge in misleading propaganda on methane gas is no accident. The gas industry is doing everything it can to stay in business. If there is no opposition, they will continue with business as usual. Even if it means endangering public health.