Promote the Vote 2022 Initiative Stalled by Board of State Canvassers

The Board of State Canvassers (BOSC) deadlocked last week in their decision to certify the Promote the Vote 2022 ballot initiative, stalling the initiative from being placed on the ballot for the upcoming November general election. Despite the Bureau of Elections recommending the initiative’s certification be approved following validation of the more than 664,000 signatures (200,000+ more than were needed) gathered from across the state, the four members of the Board of State Canvassers were split down the middle, with Republican members voting against placing Promote the Vote 2022 on the ballot.

In response to the BOSC deadlock, Promote the Vote 2022 expressed disappointment, but indicated that the fight to secure the initiative’s place on the November ballot is not over.

This is a disservice to the people of Michigan and is indicative of the obstructionist partisan politics that have taken over truly non-partisan issues like election reform and equal access to the ballot.” – Khalilah Spencer, Promote the Vote 2022 board president 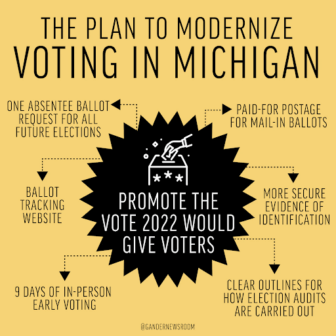 Following the BOSC decision, Promote the Vote 2022 filed a writ of mandamus, which moves the final decision to the Michigan Supreme Court.

As an active partner of Promote the Vote 2022, Michigan LCV has worked to get voting rights on the ballot, and will continue to do so. This ballot initiative would provide easier access to protect the ability of every Michigan voter, regardless of Party, to be heard without intimidation, harassment or interference while enhancing the fairness and integrity of our elections.

Heavy rain and high winds hit Metro Detroit early last week, leaving more than a quarter of a million residents without power. As of Thursday, 88,000 DTE customers remained in the dark. Like massive outages seen last summer, last week’s outages are the latest example of DTE’s poor performance and lack of action to improve the energy grid as severe weather becomes more common due to climate change.

Representatives Abraham Aiyash (D-Hamtramck) and Yousef Rabhi (D-Ann Arbor) introduced House Bills 6043, 6044, 6045, 6046 and 6047 in April, yet the bills have yet to receive a hearing. This legislation is also supported by the following groups: Citizens Utility Board of Michigan, Ecology Center, Michigan Environmental Justice Coalition, We the People Action Fund, Soulardarity and the Sierra Club Michigan Chapter.

Those bills are sitting without a hearing while lawmakers are out campaigning – it’s time for them to get back to Lansing and get to work passing this important legislation that will show they care about the repeated power outages that Michiganders endure.” – Bob Allison, Michigan LCV deputy director

Michiganders pay the highest costs for energy in the Midwest with some of the worst service in the nation. According to the Citizens Utility Board of Michigan (CUB), an independent organization representing the interests of residential energy customers, Michigan utilities lag far behind other states in terms of reliability.

The U.S. Army Corps of Engineers held a virtual hearing Thursday and is accepting written comments through October 14 to gather public input on the proposed tunnel and the future of Line 5 as part of its environmental review process. After Enbridge Energy ignored Gov. Whitmer’s shutdown order last spring, the company has proposed building a climate-killing  tunnel that would keep the 70-year-old pipeline open and fossil fuels burning for years to come.

The Environmental Protection Agency (EPA) has proposed listing PFAS as a hazardous substance under the Comprehensive Environmental Response, Compensation, and Liability Act (CERCLA), better known as the Superfund program. If adopted, the proposal would provide Superfund resources for communities polluted with PFAS while empowering the EPA to seek clean-up costs from responsible polluters, shifting the financial burden away from taxpayers.

For communities like ours, for families, for communities that have suffered for far too long, today is really a watershed moment… There are some tools in the toolbox now. This creates a much more powerful one.”

Michigan lawmakers will continue to focus their energy on the November election with few legislative session days scheduled in September and October. Republicans hold the majority in both chambers and determine the legislative calendar. With so few days scheduled there is less time to move budget appropriations (Michigan has more than $7 billion in unallocated surplus) and other high priority legislation. The light schedule could also force much work into a typically chaotic lame duck period.