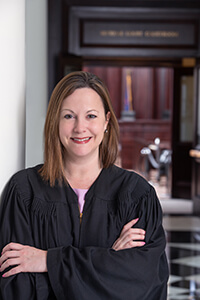 Megan K Cavanaugh was elected to the Michigan Supreme Court in 2018. She is a graduate of the University of Michigan College of Engineering and received her law degree from Wayne State University. Justice Cavanagh is the Supreme Court Liaison to Tribal Courts, Child Welfare Services, the Attorney Grievance Commission and the Judicial Tenure Commission.  She also serves on the Attorney General’s Elder Abuse Task Force. Before joining the Michigan Supreme Court in January of 2019, she had over fifteen years of experience as one of Michigan’s top appellate attorneys and was a shareholder at Garan Lucow Miller P.C. in Detroit. Prior to her election to the Court, Justice Cavanagh was rated as one of Michigan’s Super Lawyers. She was honored by Michigan Lawyer’s Weekly as Lawyer of the Year in 2006 and a Woman in the Law in 2017.