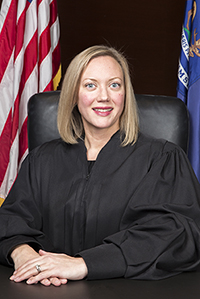 Elizabeth T Clement was appointed to the Michigan Supreme Court by Gov. Rick Snyder (R) in 2017 and was later elected to the court in 2018. She attended the Michigan State College of Law. Before her appointment by Governor Rick Snyder, she served as chief legal counsel for the Governor, advising him on a wide variety of legal, legislative, and policy matters. Her duties as chief legal counsel also included working with the Attorney General’s Office on litigation affecting the State of Michigan, negotiating tribal compacts and settlement agreements, and interviewing and recommending appointees to Court of Appeals and Supreme Court judicial vacancies. Justice Clement has also previously held the positions of cabinet secretary and deputy chief of staff to Governor Snyder, as well as deputy legal counsel in the Governor’s Office and legal counsel for Senate Majority Leader Michael Bishop. Clement owned and operated Clement Law, PLLC, from 2002 to 2006, where she represented individuals and businesses primarily in the areas of family law, adoption, probate, estate planning, and criminal law.