Manchin’s Climate Meltdown: Late last week, news broke that West Virginia Senator Joe Manchin will not support any version of a package that includes climate spending or tax increases for the wealthy. The news is a devastating blow to President Biden’s climate agenda and jeopardizes any chance of the U.S. meeting Biden’s goals on carbon reduction in the immediate future as the climate crisis worsens. 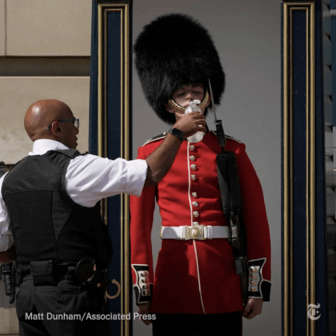 Heat Waves: Much of Europe, Asia and Africa is experiencing deadly heat waves this week as temperatures have soared towards 40 degrees Celsius (104 degrees Fahrenheit), causing airport runways to melt and railway lines to buckle and more than 1,000 heat related deaths in Spain and Portugal.  Meanwhile, wildfires – exacerbated by drought – continue to rage.  Most buildings in these countries do not have air conditioning, and many parts of the world are not equipped to handle the extreme heat caused by climate change that is happening decades sooner than experts have predicted.

Senate Semiconductor Vote: Yesterday, the U.S. Senate advanced legislation that would provide $52 billion in grants and incentives to domestic semiconductor manufacturers to speed up  development of components critical to solar energy growth. By advancing the revamped, scaled down, semiconductor chips bill via procedural vote, the Senate can now pass a final version of the legislation back to the House, where it is also expected to be passed and moved to President Biden’s desk for signature.

In the wake of the news that the window for Congressional action on climate has likely closed, there are options the President has to help address climate change, if he is willing to take them. The President spoke this afternoon on the climate crisis in Massachusetts, announcing several small measures that will do little to reduce greenhouse emissions but would help prepare to build resilience to climate impacts like extreme heat. The President is facing major criticism for failing to declare a climate emergency, which would unlock funds to spur clean energy development and allow the President to halt crude oil exports and stop new fossil fuel infrastructure projects. 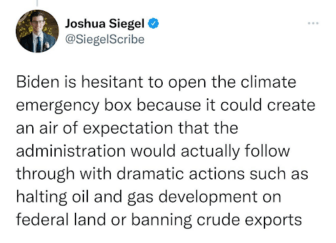 In a Twitter thread from earlier today, Politico reporter Joshua Siegel spoke to the position of the Biden administration when it comes to declaring a climate emergency ahead of the President’s remarks in Massachusetts.

As Europe burns, we must begin to question the seriousness of President Biden in addressing the climate crisis as he fails to take actions within his power. As a reminder, President Biden made a campaign pledge to end oil and gas leases on federal lands, but has yet to do so. 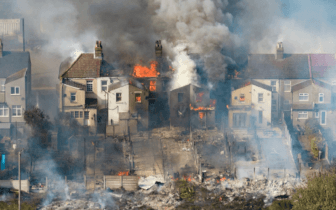 Looking back on how reconciliation negotiations unfolded, it was a clear mistake to pass the infrastructure bill without the climate provisions. In doing so, the best leverage to pass climate legislation was lost and vested interests were able to strip the bill out of existence. Amongst the casualties were the Child Tax Credit – which could have cut child poverty in half – as well as dental and vision care, free community college, universal Pre-K and immigration reform.

Senator Manchin certainly deserves much of the blame, but a system that allows one man elected by roughly 300,000 people in a country of 329 million to block the governing party’s agenda is certainly not how democracy is supposed to function. What happens next in Washington remains to be seen as the climate crisis continues to unfold, but for now, in the wake of Manchin’s inaction, the President must do more.

As the viability of Congressional action on climate change remains uncertain, the importance of state-level climate action has never been greater. Here in Michigan, we can be proud of the steps that Gov. Gretchen Whitmer and other pro-climate elected leaders have taken to make Michigan a promising example of the importance of state level action to protect our future. 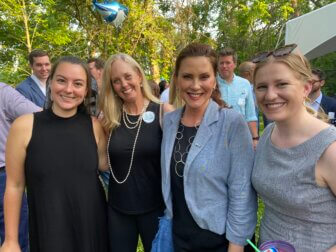 A recent article from E&E News highlights Gov. Whitmer’s incredible leadership as a climate champion despite an increasingly toxic partisan landscape. Governor Whitmer’s Building Michigan Together Plan – previously known as Senate Bill 565 – and the MI Healthy Climate Plan are a testament to her success in bringing together stakeholders to find solutions for  climate and water challenges in Michigan.

As Michigan LCV’s executive director Lisa Wozniak explained in her quote in the article:

Having leaders like Gretchen Whitmer elected to office in states matters more… than almost anything else.”

Having a pro-climate leader like Gov. Whitmer sure does make Michigan LCV’s work easier!

One of the pillars of Michigan LCV’s climate work is our storytelling efforts as we continue to share the stories of Michiganders across the state and why they believe in taking action to protect our climate, planet, and future. Our latest video story features Julia Cole, a Michigan LCV board member and nationally renowned climate scientist. 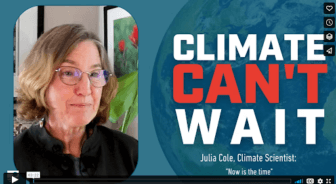 Despite inaction in Washington, the Michigan LCV team remains committed to sounding the alarm that the time for bold climate action is now, and Julia’s story speaks to why climate can’t wait. I highly encourage you to watch the video and share it with your friends and family