« Back to all Latest News
Dear Michigan LCV Family,

Welcome to the November 18, 2021 edition of Three Things Thursday! It has been (as it always seems to be) a very busy week for the Michigan LCV team. Between a bill signing in Washington, DC, the ongoing Build Back Better Act efforts, and our annual awards gala, it’s definitely been a BIG week.  Let’s dive in.

After Congress passed the Bipartisan Infrastructure Act, the important spending package aimed at upgrading our country’s transportation, water, and energy infrastructure, President Biden signed the legislation into law on Monday during a ceremony at the White House. I was extremely honored to be there to witness the signing of this historic bill, a decision that is ultimately an enormous investment in the future of the American people. 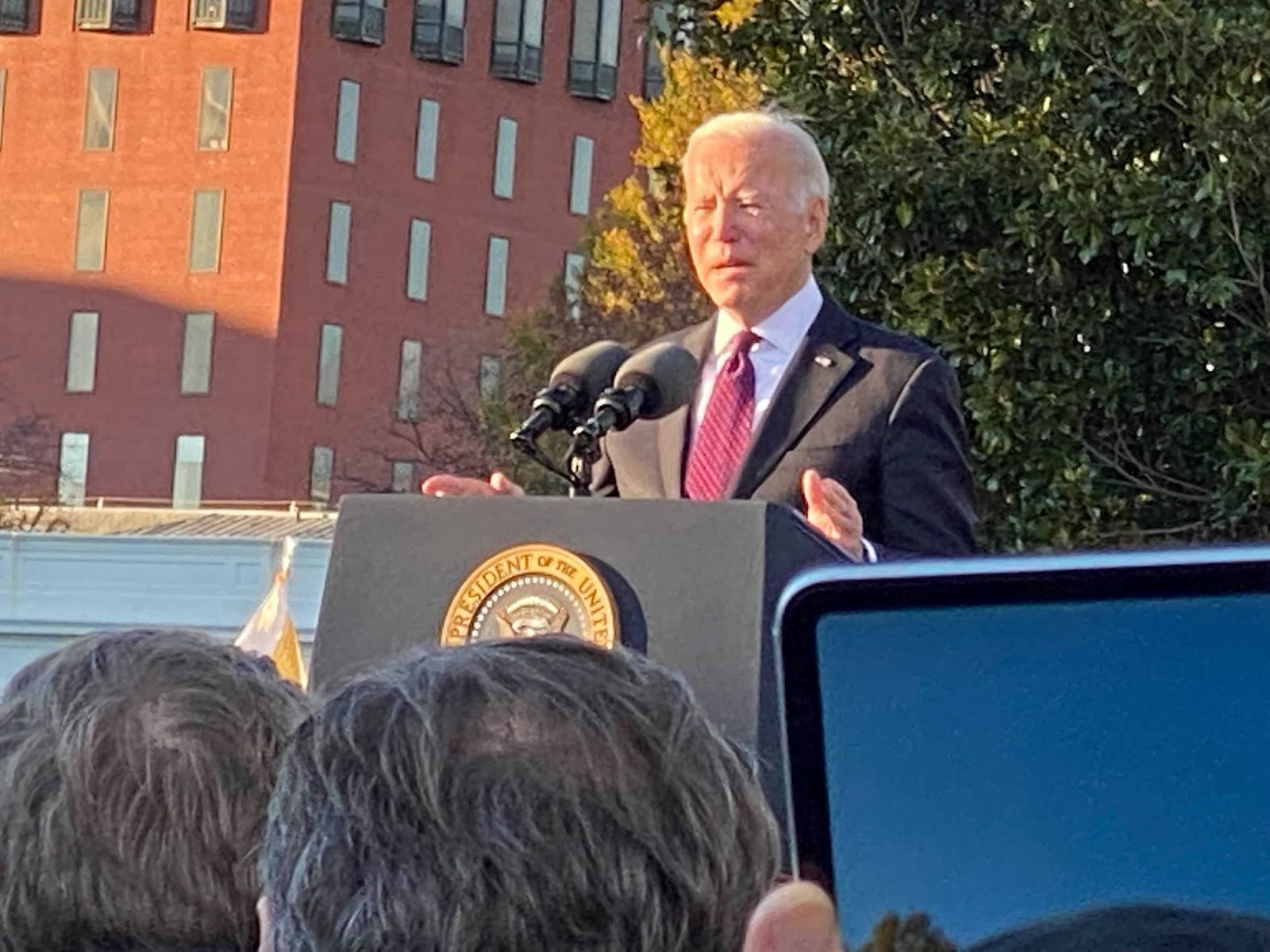 I attended the ceremony with Monica Lewis-Patrick, longtime human rights activist and Water Warrior who is also the President of We The People of Detroit. Sitting side-by-side in a row just behind the many members of Congress, we shared the historic moment together, knowing how important these infrastructure investments will be for communities throughout Michigan.

Among the over 20 mayors in attendance, I had a chance to speak with Chicago Mayor Lori Lightfoot.  I was sure to tell Mayor Lightfoot that my cousin/god daughter Erika Wozniak serves as the chief of staff for Alderman Nugent, and the Mayor’s face absolutely lit up.  Her response was, “She’s wonderful! Let’s get a photo!” 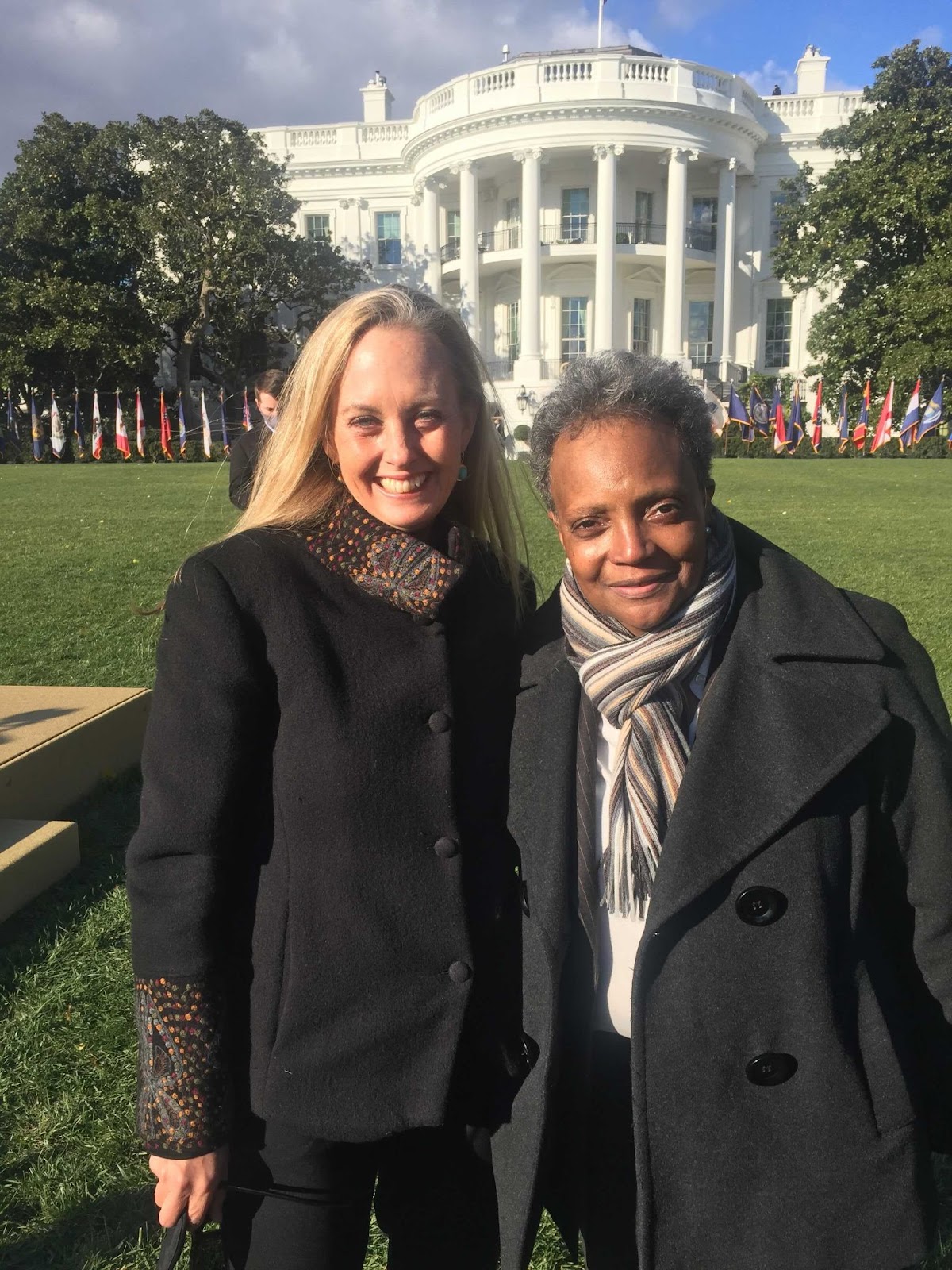 A moment with Chicago Mayor Lightfoot before the ceremony began.

Monica and I also ran into a slew of other friends, including, but not limited to: Radhika Fox, Assistant Administrator in the Office of Water at the EPA;  Congresswoman Debbie Dingell, Congressman Dan Kildee,  former Congresswoman/national LCV board member Donna Edwards (MD), United Steelworkers Union International Vice President Roxanne Brown (who is also a member of the national LCV Board of Directors), National Wildlife Federation CEO Colin O’Meara, and Congresswoman Elissa Slotkin. 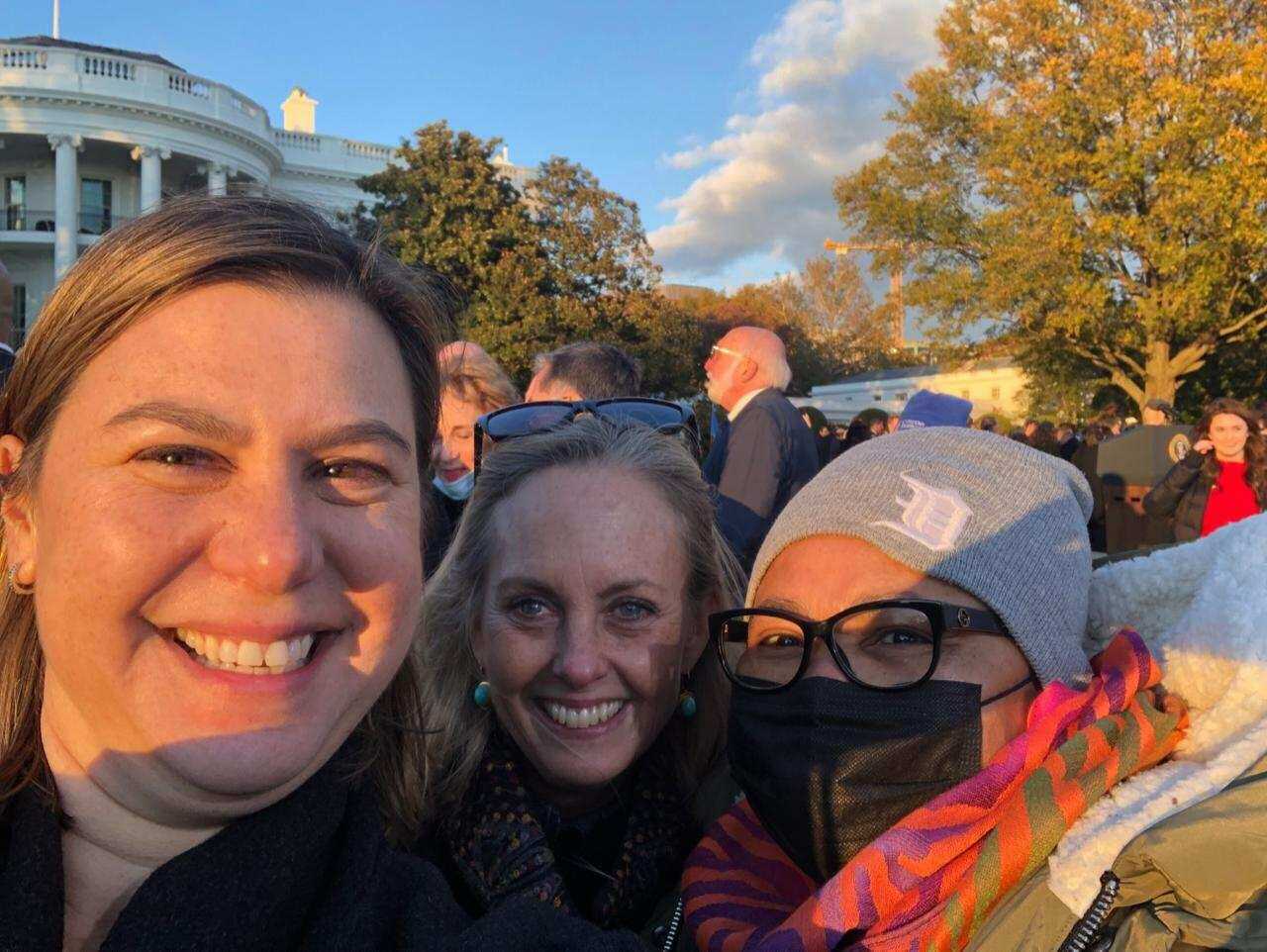 Congresswoman Elissa Stotkin, myself and Monica Lewis-Patrick moments following the bill signing, as the sun began to set.

Now that the Bipartisan Infrastructure Act is officially signed into law, the focus of the entire Michigan LCV team, as well as our conservation, climate, and environmental justice partners, is firmly fixed on getting the Build Back Better Act across the finish line. Much like the Bipartisan Infrastructure package, the Build Back Better Act has been hung up in Congress for months as deliberations and differences between progressives and moderates have slowed the process of getting historic and meaningful climate change legislation enacted.

As we go to press, a vote on the Build Back Better Act is taking place in the United States House of Representatives.

In an effort to galvanize support for the Build Back Better Act, President Biden visited Detroit yesterday, meeting with union officials at GM’s plant in Hamtramck to discuss the benefits of the investment package when it comes to automotive and electric vehicle manufacturing and the creation of good-paying union jobs. Our team welcomed President Biden to Michigan, making clear that his commitment to climate action and water protections are our priorities, too.

The job is far from done in Washington, D.C.  Until the Senate casts their vote, Build Back Better hangs in the balance.  Please know that the Michigan LCV team will continue to provide updates via our social media channels, and you can always find the latest developments in our Washington Weekly, Michigan LCV’s federally-focused newsletter.

2. The American Rescue Plan: why the state legislature needs to move funds now to protect public health and the environment

In my early October Three Things, I highlighted that Michigan has access to close to $6 billion in federal funding from the American Rescue Plan (ARP).  The funds were sitting in Lansing at that time, unallocated. I emphasized what an amazing opportunity this is for Michigan to address critical issues, such as upgrading our water infrastructure, protecting drinking water and public health, and creating good-paying jobs. Despite this opportunity, and the immense need for funding in so many municipalities all across the state, the Republican-controlled House and Senate had done absolutely nothing to disperse the dollars; and, still, they have yet to act.

As cities like Benton Harbor, Hamtramck, Pontiac, and many others deal with lead contamination; and as cities like Oscoda, Belmont, Ann Arbor, Traverse City and others grapple with toxic PFAS contamination, residents all across the state are finding themselves plagued with unsafe drinking water, which poses serious health risks, including deadly cancers.

These are critical problems that need and deserve immediate investment.  The Michigan LCV team has been working to elevate these issues, urging our elected officials in Lansing to take action NOW.

Over the course of the last many months, the Governor has put forth a number of bold ideas related to water investments. In fact, just today Governor Whitmer proposed a $300 million expansion of her MI Clean Water Plan, building on a previously announced, $200 million expansion to replace lead service lines statewide by using American Rescue Plan funds. As stated in today’s announcement, “Between these two expansions and previous announcements, the Governor has proposed investing $885 million in a comprehensive slate of water plans that would use a combination of state and federal funds to build up water infrastructure in our communities, schools, and homes, while creating tens of thousands of good-paying jobs.”

Governor Whitmer’s proposals are a big step in the right direction.  However, nothing can be done without legislative action.  Do your part: call your legislators now and ask them to take immediate action.

After months of preparation and hard work, the Michigan LCV team hosted our annual event on Wednesday evening, the 2021 Detroit Equity & the Environment Awards Gala!

We were incredibly honored to spotlight five outstanding Michiganders for their tireless work to foster, preserve and protect our air, land, water and democracy for the people of Michigan.

While this year’s gala took place virtually, as we continue to grapple with the realities of living in a COVID world, that did not detract from the celebratory atmosphere. This year, we honored Secretary of State Jocelyn Benson and Assistant Secretary of State Heaster Wheeler for their work to protect and preserve democracy and voting rights for Michiganders leading up to and following the 2020 election; Bay Mills Indian Community President Whitney Gravelle for her amazing work to shut down Enbridge’s Line 5 oil and gas pipeline running through the Straits of Mackinac; and PFAS activists Sandy Wynn-Stelt and Tony Spaniola for their dedication to tackling the toxic PFAS contamination crisis that continues to impact communities across our state. All of the honorees spoke passionately about their work and expressed heartfelt gratitude for the recognition bestowed upon them.

Both Secretary Benson and Assistant Secretary Wheeler spoke of the importance of both protecting Michigan’s elections from misinformation and attempts to delegitimize the voice of voters, and about how we must ensure our elections are fair and accessible for all Michigan voters. 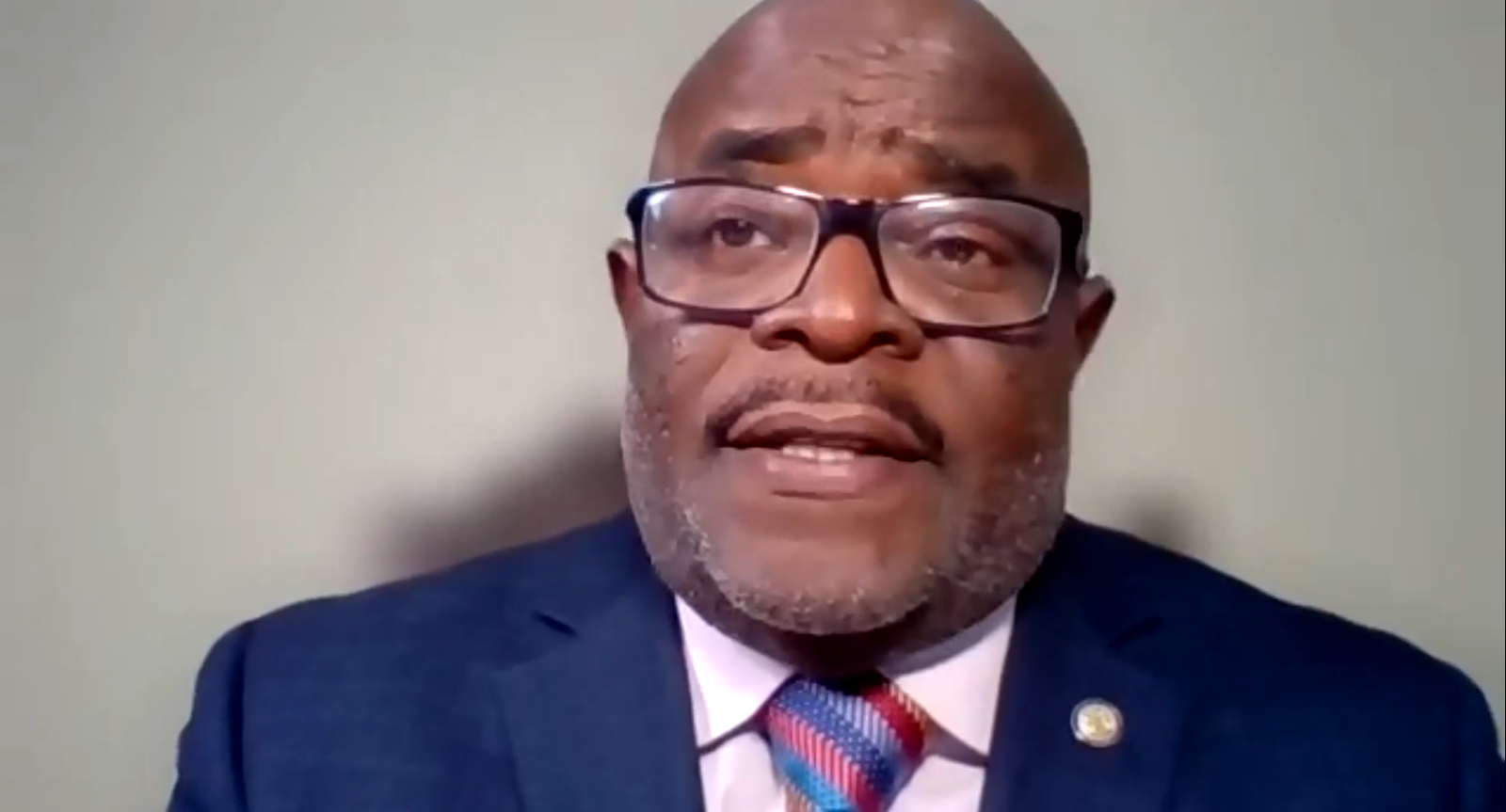 “Removing barriers to participation in our democracy is not a task we take lightly. While we were grateful to see this work pay off last year, the work continues,” said Assistant Secretary Wheeler. Secretary Benson added, “We believe strongly that democracy is a team sport. Everything gets back to access to the ballot box.”

President Gravelle spoke about her work and the efforts of the Bay Mills Indian Community to shut down Enbridge’s Line 5 pipeline running through the Straits of Mackinac once and for all. 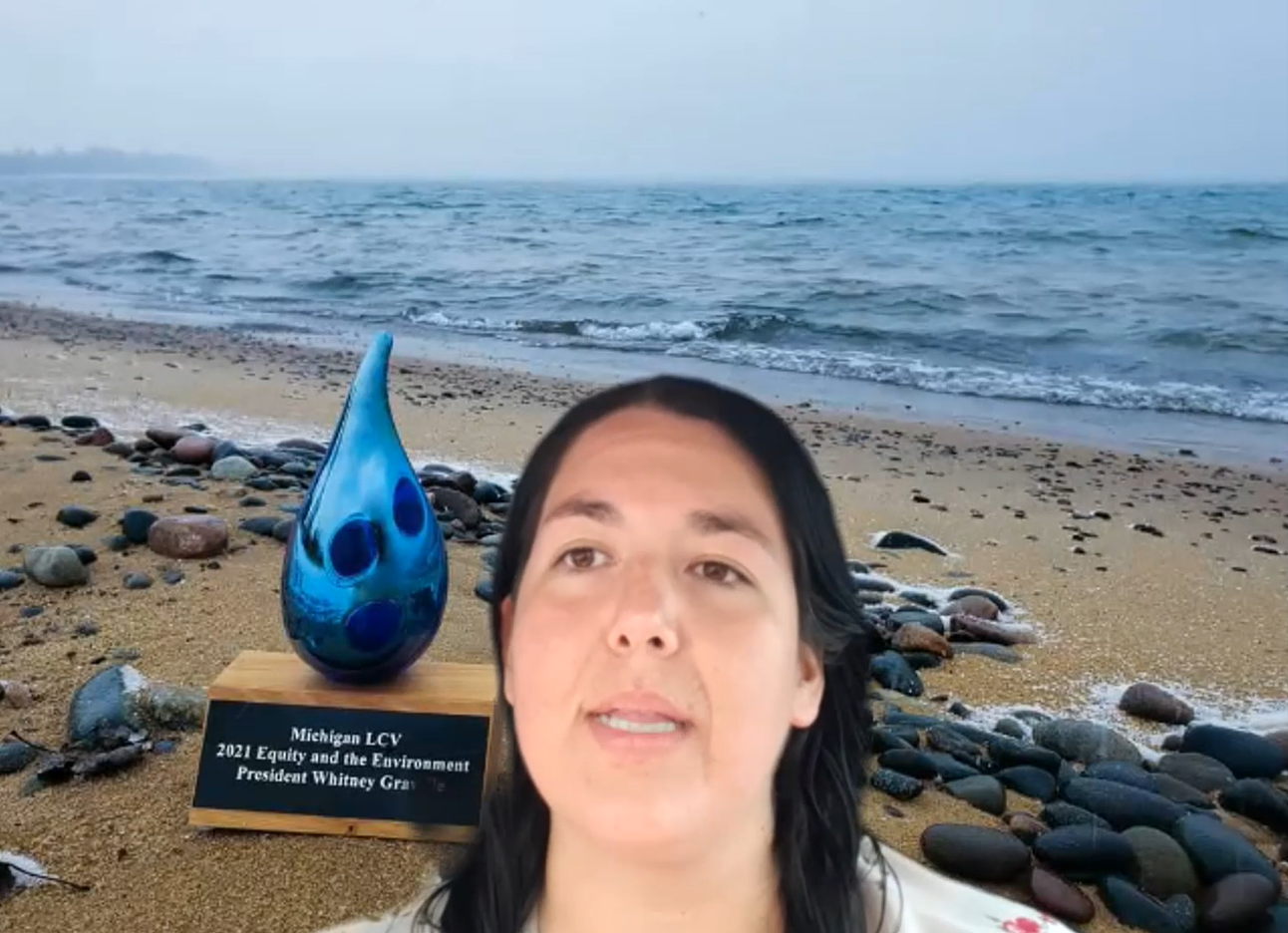 “Line 5 has gained a lot of attention recently,” said President Gravelle. “For our tribal citizens it is about our relationship with land & water. Any decision we do take should have a more sustainable future for the next seven generations.”

Sandy Wynn-Stelt and Tony Spaniola spoke about their work over the past year to found the Great Lakes PFAS Action Network (GLPAN) and catalyze meaningful action on the local, state, and federal levels to address the PFAS contamination crisis. Speaking from their own experiences with toxic PFAS contamination in Belmont and Oscoda, where PFAS has severely impacted their communities, Sandy and Tony’s remarks were inspiring and re-energized us to continue to push for action to hold polluters accountable and protect the health of our communities. “Water is the great equalizer. We all need access to clean, safe water,” Sandy Wynn-Stelt said when discussing her work on PFAS contamination. “We can make a difference when we all come together.” 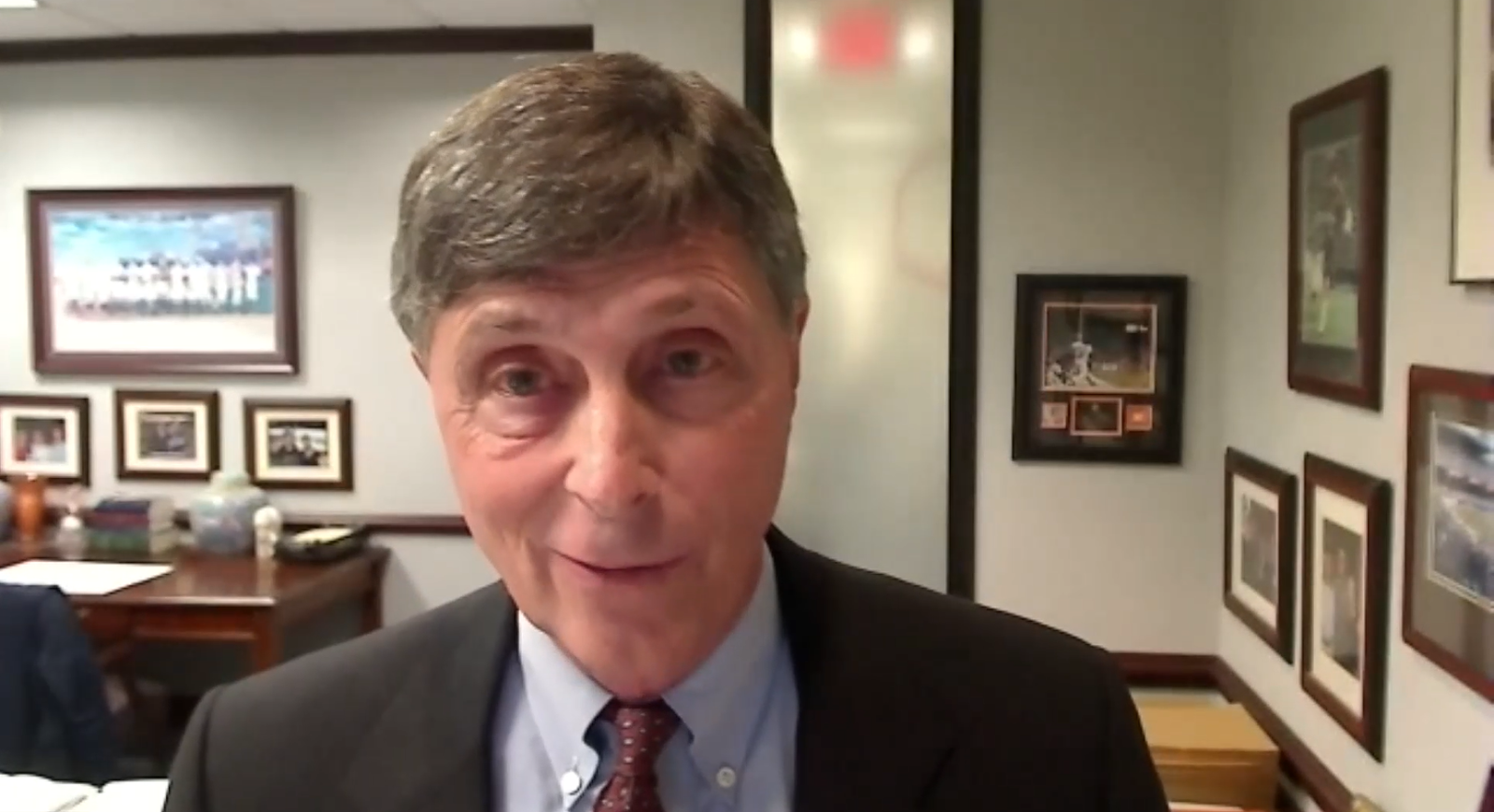 Tony Spaniola added, ““We’ve come a long way, but there is much more to be done.”

Natasha Miller, incredible poet and lifelong Detroiter, joined us to share a poem she wrote for Wednesday’s gala called, “We Are Here,” written about environmental justice and the schism between socioeconomic classes and racial identities, and the fact that Detroit neighborhoods often have a small or no bird population compared to suburbs. 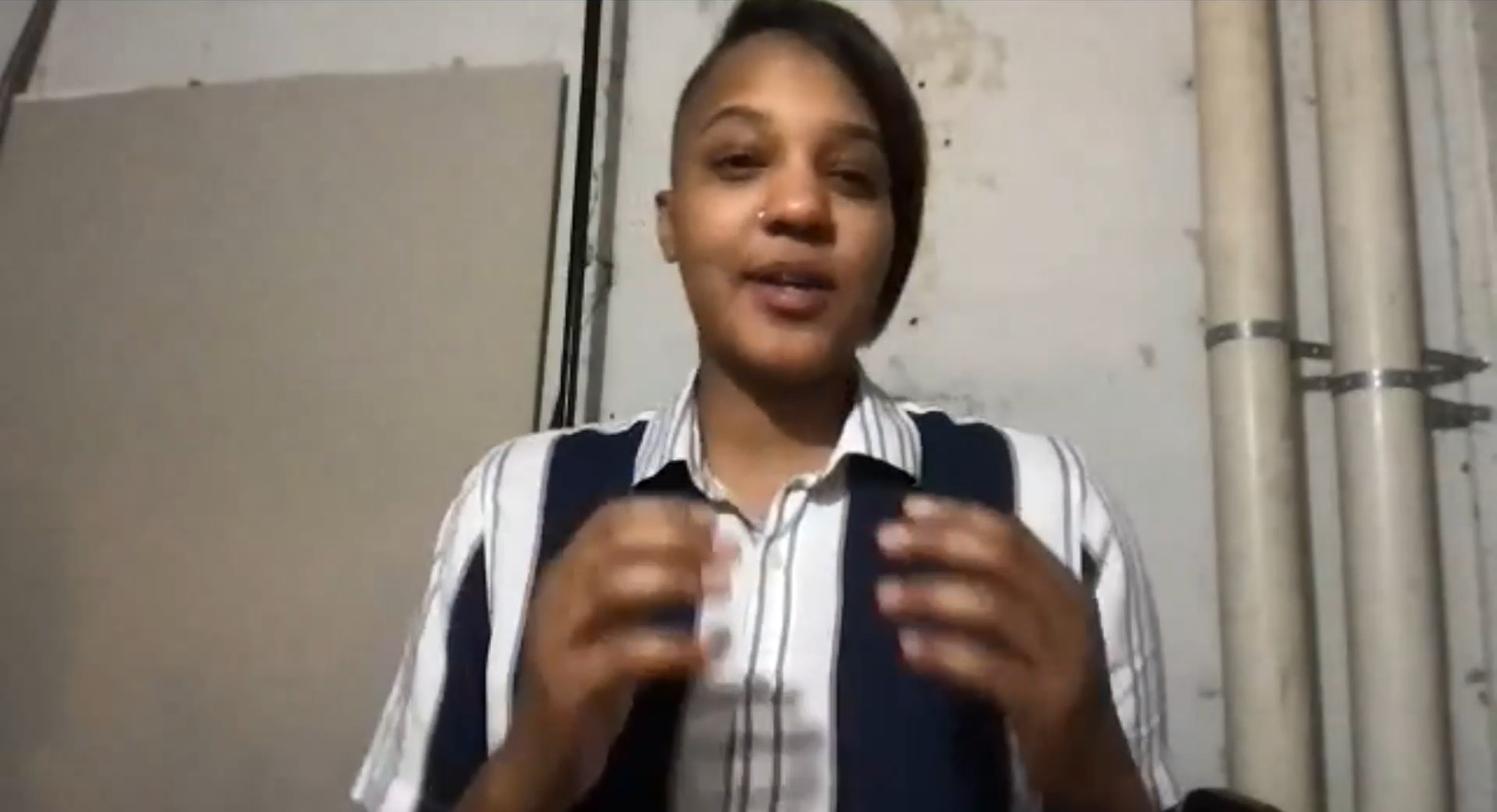 This is an event that always leaves people inspired because the people we honor are amazing. If you didn’t have a chance to join us, here’s a short synopsis of the evening.  If you’d like to have the link to the event in its entirety, please let me know. Oh, and WDET’s Ann Delisi was our emcee — she was a rock star!  It was, truly, a night to be remembered.

Thanks, as always, for all you do to support our work.  It’s critical work and it’s more important now than ever.