Welcome to the October 7, 2021 edition of Three Things Thursday! After a week of anticipation surrounding a potential vote in Congress that did not come to pass, the Michigan LCV team took a deep breath and doubled down, determined as ever to get the much-needed climate/justice/jobs packages passed in Washington, DC.

This week’s edition of Three Things takes a look at President Biden’s visit to Michigan on Tuesday to promote the Build Back Better Act and bipartisan infrastructure legislative framework; what Michigan should do with existing federal dollars that are languishing in Lansing; and an update on Line 5 in the wake of a dastardly move by the Canadian government.

Before we dive in, I want to bring attention to the Republicans’ most recent work to pass anti-voter bills in Lansing. Yesterday, the Senate passed an amended version of Senate Bill 303, which has been sitting in the Legislature for the last several months. The bill aims to not only limit absentee and in-person voting options, but also restrict funding for elections.

Yesterday’s vote on the amended version of SB 303 indicates a change in tactics by GOP lawmakers, as they shift the focus of the anti-voter bills in Lansing to mirror the intent of the so-called “Secure MI Vote” (what a misnomer!) ballot initiative approved by the State Board of Canvassers last month. It is clear that Republicans, while still attempting to portray these bills as  “voter ID reforms”, are taking direct aim at our freedom to vote in a multifaceted manner.

All of these attempts to restrict voting options and block funding for local clerks are an outrageous perpetuation of the Big Lie and present a very real threat to the future of our democracy in Michigan. You can read Michigan LCV’s full statement on yesterday’s vote here.

There’s much more to all of this.  I promise to keep you posted. But, for now, let’s move to this week’s Three Things:

After House Speaker Nancy Pelosi delayed a vote on the bipartisan infrastructure bill late last week, establishing a tentative new deadline of October 31st to secure a deal for both the transformative Build Back Better Act and the infrastructure bill, President Joe Biden visited Michigan on Tuesday to promote the transformational benefits contained in these pieces of legislation. 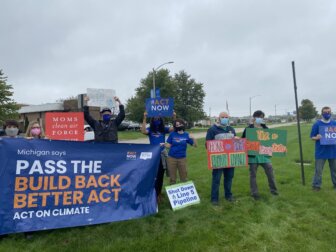 The President toured the International Union of Operating Engineers Local 324 training facility in Howell while making abundantly clear the importance of investing in our country’s aging infrastructure and the American people, and doing so right now while the moment of opportunity is before us.

In his fourth presidential visit to Michigan, President Biden’s tour of the union training facility highlighted the major benefits Michigan could receive if Congress passes the twin initiatives. Taken together, both plans would provide integral funding to construction projects to upgrade our roads and bridges, enhance transportation systems (including investing in electric vehicle production), speed the transition to a clean energy future, water infrastructure,  expand broadband internet infrastructure, and begin to tackle the climate crisis at the scale that science demands.  As a result, thousands of good-paying union jobs will be created, benefiting unions like Local 324 and many others across the state.

The Detroit Free Press covered the President’s visit and laid out some infrastructure bill details as they pertain specifically to Michigan (which is possible because the text of the infrastructure bill is settled, while the Build Back Better Act language is still under negotiation) :

It was invigorating to see broad, united Democratic support for the President after last week’s delayed vote, which came in part after progressives and moderates in the Democratic Party could not come to an agreement over the passage of both the bipartisan infrastructure plan and the Build Back Better Act, the latter of which is key to tackling  the climate crisis and putting our country truly on track towards a clean energy economy and future. 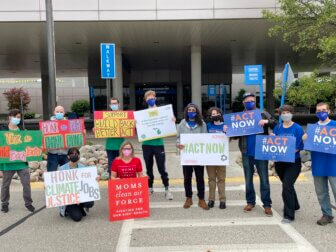 As the timeline for both pieces of legislation has now shifted to the end of October (Halloween Weekend–how spooky!), the Michigan LCV team has doubled down on our efforts (with our partners at national LCV) to tell the story of the benefits of the Build Back Better Act.  As President Biden pointed out, we are at a critical juncture right now and it is imperative that Congress takes advantage of the momentous opportunity before us.

For in-depth updates on the latest goings-on in Washington and expert analysis on what this all  means for Michigan, I encourage you to check out our federally-focused newsletter, the Washington Weekly.

Finally, I urge you to send a message to your Congressional leaders telling them to pass the Build Back Better Act and take meaningful action to address the climate crisis. This piece of legislation is a once-in-a-generation opportunity to invest in renewable energy, create clean energy jobs, and protect future generations. You can use our one-step advocacy tool to send your lawmaker a message urging them to take action now before it is too late. Click here to send your Congressional leader a message today.

2. Federal funds sitting in Lansing–where should they be invested?

As I wrote about in last week’s Three Things, Gov. Whitmer signed legislation on September 29, approving Michigan’s state budget for the 2022 fiscal year. Included in the 2022 budget resolution is funding for a number of key priorities, including clean drinking water, infrastructure, and job creation across the state. Not included, however, is any indication of how Michigan will use billions of unallocated dollars that have come into the state through the American Rescue Plan (ARP).

An article published by the Citizens Research Council of Michigan last week describes the fact that the state of Michigan has access to nearly $11 billion dollars when you combine unallocated funds from the 2022 budget for COVID-19 recovery and revenue surplus from the end of 2021.

This $11 billion total in unallocated funds provides Michigan with an amazing and rare opportunity to address key priorities related to our public health, environment, and economy. In short, these funds, if used strategically, can be a down payment on the things that matter most to Michigan — protecting human health, cleaning up our drinking water and taking bold action to address the climate crisis — while creating jobs and getting Michiganders back to work as we continue to recover from COVID.

The Michigan LCV team has developed strategic recommendations for how these critical funds can and should be used.

While it remains to be seen how these unallocated funds will be used, Michigan LCV is determined to see deep investments in our drinking water, economy, and the people of Michigan. This can and should be a down payment on the investments that we all know need to happen to truly protect people, place and planet.

As conversations heat up in Lansing over the next several months, I will be sure to keep you updated and engaged.

3. Line 5 update: A dastardly move by the Canadian government

I know I provided a Line 5 update a couple weeks ago, but there’s never a dull moment on this front.

On Monday, the Canadian government invoked an article in a 1977 transit pipeline treaty between Canada and the United States that they claim “prevents the state of Michigan or the U.S. government” from interrupting or disrupting the operation of the Line 5 pipeline under the Straits of Mackinac, owned and operated by Enbridge Energy.

This action by Canada, which signals that Enbridge is a higher priority than the health of the Great Lakes,  comes after months of legal negotiations between the state of Michigan and Enbridge, which have reached a dead end.

After a Canadian government official informed U.S. District Judge Janet Neff of the invocation, Gov. Whitmer issued a strongly-worded statement, which I include in totality here:

“I am profoundly disappointed that today the Government of Canada chose to invoke Article IX of the 1977 Transit Pipelines Treaty in a bid to help Enbridge, a private oil company, keep crude oil running indefinitely through Michigan’s Straits of Mackinac. So long as oil is flowing through the pipelines, there is a very real threat of a catastrophic oil spill in the Great Lakes. I have made clear to Enbridge that it cannot use our state-owned lakebed for these pipelines, but Enbridge has refused to stop. Moreover, rather than taking steps to diversify energy supply and ensure resilience, Canada has channeled its efforts into defending an oil company with an abysmal environmental track record.

Michigan is, and will remain, a strong partner with Canada on a range of issues. However, I will not remain silent when the fate of the Great Lakes and Michigan hangs in the balance. I had expected that Canada, a nation that prides itself on its commitment to environmental protection, would share my interest in protecting the Great Lakes. Instead, the Government of Canada has chosen to do the bidding of the very oil company responsible for the 2010 Kalamazoo River Oil Spill – one of the largest inland oil spills in the history of the nation that happened right here in Michigan. At the same time, Canada is proposing to store nuclear waste in the Great Lakes Basin, adding even more risk to our waters. I remain confident that Michigan will prevail in its legal efforts with respect to Line 5, regardless of today’s action, and I will continue to fight to get the pipelines out of the water.  I call on Prime Minister Trudeau to reverse his decision.”

As Gov. Whitmer said in her statement, and as we saw in Orange County, California last weekend, our waters are not safe with pipelines running through them, especially not the Great Lakes where a damaged, dangerous, outdated Line 5 is still in operation.

From the perspective of Michigan LCV and our numerous partners (indigenous groups, activists, and clean water organizations), the move on the part of the Canadians is Enbridge’s latest attempt to delay a decision in the courts, while building support for the sustained transportation of tar sands oil and the building of their so-called tunnel, which the company has attempted to portray as a “safer alternative” to the decrepit 69-year-old pipeline that sits at the heart of our Great Lakes. In reality, alternatives to Line 5 already exist and an orderly transition away from Line 5 is a much less risky option than building a “tunnel to nowhere” over the next 7 – 9 years.

Right now, the federal district court is in the process of determining whether the lawsuit belongs in federal court or state court. There’s nothing about that determination that is affected in any way by this treaty. Not this letter, not anything else really should get in the way of Judge Neff determining where the case belongs.” – Oday Salim, National Wildlife Federation attorney (via Michigan Advance)

It is our greatest hope that Judge Neff takes action, remanding the case to the state court where it can then be robustly considered and decided upon.

Stay tuned for more updates on the fight to shut down Line 5 and our work to ensure the Straits of Mackinac, the Great Lakes, and the people of Michigan do not ever experience the devastation of a catastrophic oil spill.

Thank you for all you do to support our work. Please stay safe and healthy.  Until next week…