Welcome to the post-election edition of Three Things Thursday. As many of us attempt to regain some sense of equilibrium, it is important to reflect on the unprecedented nature of this election and all of the tireless and courageous work that has brought us to this moment.

Michigan broke voter turnout records during this election (5.5 million people cast ballots), smashing the previous numbers for total voters!  Given our deep work in the arena of voter engagement/mobilization and election protection, and given heroic roles played by poll workers and election officials across this state, I start this week’s update with just that. Then, the Three Things focus on candidate election outcomes.

Given the challenges that came with the March and August primary elections, Michigan LCV Ed Fund launched a poll worker recruitment program and made nearly 1 million direct voter contact attempts to encourage Michiganders to vote. These initiatives culminated in the recruitment of over 8,500 poll workers and direct voter contact efforts that yielded over 7,600 voter contacts. It goes without saying that we are incredibly proud  of the work we, and so many others across our state, accomplished in order to ensure a safe, fair, and free election for all.

We knew from the beginning that this would be a truly historic election. Thanks to Secretary of State Jocelyn Benson and local election officials, Michigan prioritized accuracy, with dedicated election workers working into the early hours of the morning and over the course of multiple days to ensure every legal vote was counted. (If you didn’t have a chance to watch Sec. Benson’s virtual press conference last night, it was amazing. This is what democracy looks like.)

Yesterday, in Detroit, after a long, hard election day, poll workers stood strong as those allied with Trump arrived en masse at the TCF ballot counting center. By now, I’m sure you’ve seen the sight that unfolded there, with Trump supporters harassing election workers who were doing their jobs to ensure every vote was counted. These amazing poll workers and election officials were not deterred, and they got the job done.  Two of our Michigan LCV teammates were inside the TCF Center all day– Clare Allenson and Joané Booth– and I asked Joané to share what she experienced:

We must be clear, the people of Detroit saved us! The same people who have been excessively exposed to pollution, faced with high rates of COVID, and intentionally disenfranchised from the voting process, turned out in record numbers. Not only did they turn out, many then turned around and put their lives on the line to serve as poll workers and count votes under the worst circumstances. These men and women are the heroes of this election and that should be the most important message communicated far and wide.

I witnessed a direct assault on our democracy last night, but also watched Black and brown poll workers navigate an extremely intense environment with grace and integrity. Their lives were put at risk by people– many of whom do not live in the community–coming in without properly wearing masks and constantly ignoring the 6ft rule to hover over them and challenge as many ballots as they could. They dealt with people chanting “stop the vote” not only outside of the room, but inside the counting room as well. These determined poll workers ignored the attempts to break the glass doors to the room by banging on them. They remained calm and undeterred as their character was routinely called into question and they fielded a barrage of insulting questions, all the while following the legal processes necessary to simply count ballots and make sure their community was accurately represented.  I have so many emotions about what I witnessed at the TCF Center, but the one that rises to the top is admiration. The people of Detroit showed me exactly what true democracy looks like, from start to finish, and I will forever be thankful to them.

And now, onto the Three Things:

1. Michigan holds on to key Congressional and Senate Seats; state goes to Biden

Despite strong headwinds, the last brick in the so-called Blue Wall, known as Michigan, held strong, delivering 16 electoral votes for Vice President Joe Biden! While we do not know the final outcome of the presidential election, we are confident Biden will continue this trend and take the White House. (NOTE: you may want to read this NYT article about how Michigan moved from red to blue between 2016 and 2020)

Other major wins at the federal level in Michigan include U.S. Senator Gary Peters’ narrow victory over Republican challenger John James. The race was neck-and-neck until a swath of absentee ballots were counted from the cities of Detroit, Flint and Grand Rapids, pushing Peters over the top. John James made National LCV’s list of the “Dirty Dozen” due to his lock step following Trump’s anti-environment record.  Our national partners at LCV Victory Fund ran a multi-million campaign for Peters that included two statewide broadcast TV ads, African-American radio and mail, and an aggressive voter contact program that made over 2 million attempts statewide.

Other key wins for LCV-endorsed candidates include:

This is solid news as we need these leaders in Congress, and Vice President Joe Biden in the White House, to get our country back on track, protecting the health of Americans and our drinking water, and tackling the climate crisis.

Another bright spot this election was the twin victories of two outstanding women running for Supreme Court: Chief Justice Bridget Mary McCormack and Elizabeth Welch. Their election secures a 4-3 majority of progressively-minded justices on the court. This hasn’t been the case since 2010.

I cannot stress how important the Supreme Court will be in the coming years. Now, more than ever, we need leaders on the Supreme Court who will put our health first and protect our air, land and water. In many instances, the Supreme Court is the final say on critical legal matters, as they were in the July 2018 ruling regarding the legitimacy of the Voters Not Politicians ballot initiative, a ruling that allowed the initiative to remain on the ballot.

In the days ahead, the Michigan Supreme Court will determine the final maps once the independent redistricting commission completes its work in redrawing state legislative districts, new districts that will then take effect in 2022.  The Supreme Court will also play a critical role in public health actions taken by state leaders.  We saw the importance of this role only weeks ago when Governor Whitmer’s orders to stem the spread of Covid-19 were struck down by the current Supreme Court.

Our CVM PAC partnered with Black PAC, a national organization that works year-round to engage African-Americans, investing $300,000 in five weeks of statewide radio targeted to this important part of the electorate.  Our radio ads were coupled with mail and digital executed by two partner organizations — combining nearly $1 million in spending to build support for McCormack and Welch in key urban areas that eventually tipped the race.

3. Critical wins in Oakland County and the State House

A key focus of the Michigan LCV PAC and CVM PAC programs was on candidates running for state House, and a new initiative aimed at the Oakland County Board of Commissioners. We raised and spent nearly $1.6 million, delivering TV ads, millions of digital impressions, dozens of mail pieces, and direct calls to voters.

Our Michigan LCV PAC worked alongside our endorsed candidates, doing thousands of phone calls and door knocks, and delivering contributions to their campaigns.  Below are just two of the shout-outs we got from some of our successful candidates, showing the incredible strength Michigan LCV has built. 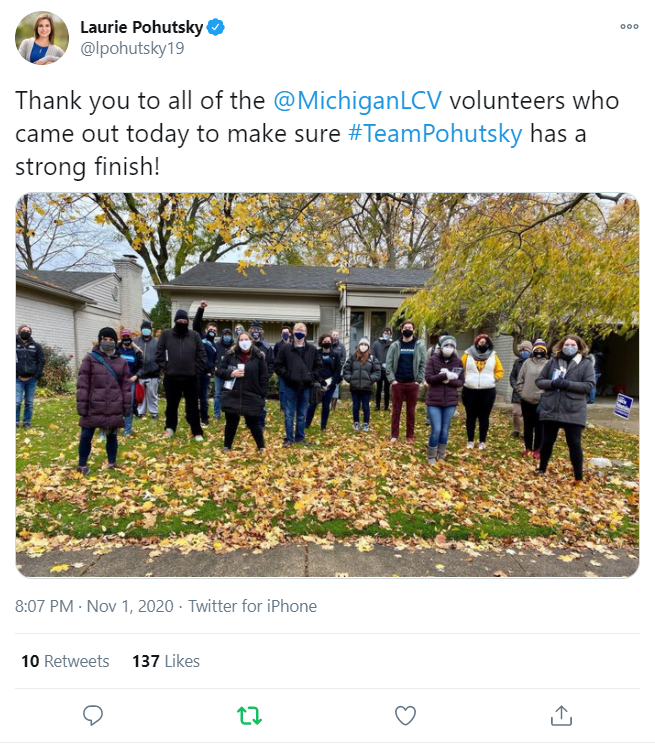 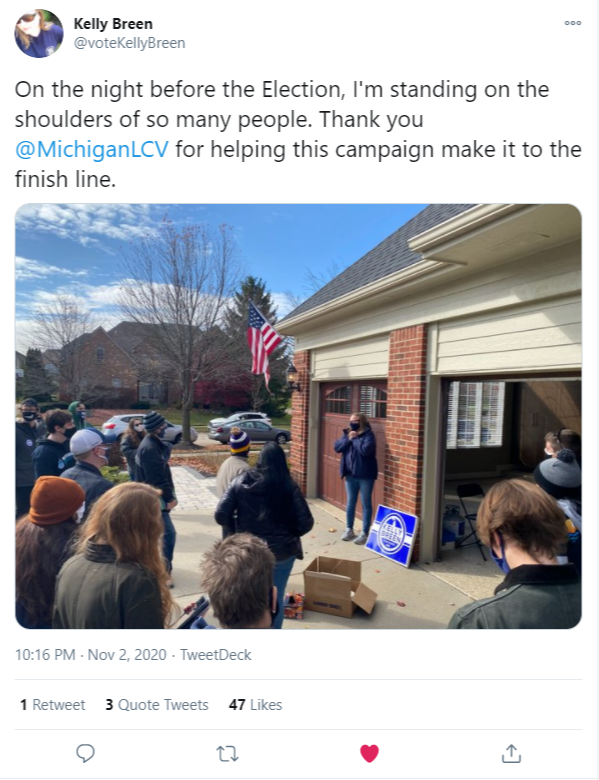 Click here for our elections results page to see our candidate wins.

I’m also happy to share that our work at the municipal level in Oakland County was very successful — securing a 12-9 pro-clean water/climate majority on the Oakland County Board of Commissioners.

We endorsed and supported nine (9) candidates running for the Oakland County Commission.  Two of them won by less than 1,000 votes, and we were able to flip one seat in the Rochester Hills area with the 104-vote victory of Dr. Melanie Hartman. Also, Michigan LCV-endorsed County Executive Dave Coulter won re-election.  You can check out all of our endorsed candidate wins in Oakland County on our website here.

These victories will have a major impact as we continue our work in Oakland County to pass municipal initiatives to tackle climate change, like our Oakland County Climate, Jobs, and Justice Platform, which sets a goal of achieving carbon neutrality county-wide by 2050.

Despite the efforts by our PACs to flip the House to a pro-conservation majority–which given the political realities of 2020 meant electing more Democrats to office–the state House continues to be a 58-52 Republican majority.

We were able to win two critically-important House races, flipping a House district in Novi with the victory of Kelly Breen, a Novi City Councilwoman, who ran on clean water issues; and another in Portage, south of Kalamazoo, where Christine Morse won the 61st House District, running ads, in part, on the #OurWater theme.

Rep. Laurie Pohutsky (HD-19) in Livonia was also able to edge out a narrow win to retain her seat and both our PACs played a large role in her campaign. And we helped protect another one of our champions, Rep. Padma Kuppa in Troy, who retained her seat, as well.

This election cycle, we endorsed 60 candidates running for state House — and 90% won! To see a full list of our endorsed candidates who won their races, check out our website here.

While we were hoping for a pro-clean water/climate majority in the House, this election is a sobering reminder that Michigan is one of the most gerrymandered states in the country.  The last line drawing was done by Republicans in 2010 behind closed doors to ensure that a map was drawn that protects their seats in the Michigan Legislature.

In fact, this morning in MIRS, a Capitol news service, former Republican House Speaker Jase Bolger directly attributed the victory to the district appointment plan drawn back in 2011.

That’s why you see Democrats routinely winning the statewide popular vote to elect our US Senators and candidates for statewide office, only to see Republicans win a majority of seats in the Legislature.

But, this was Republicans’ last shot at a gerrymandered legislative map.  In two years, Michigan will  have fair legislative districts drawn by the Independent Citizens Redistricting Commission, a commission established this year thanks to the 2018 passage of Prop 2, otherwise known as Voters Not Politicians.

As I conclude, please know I have faith that Vice President Biden will be the next President of the United States, and I know very clearly the role this great state of ours played in making that possible.  There is no doubt that we have work to do, in large part to better understand the polarization that exists in this nation. Having recently finished Ezra Klein’s important book aptly entitled, Why We’re Polarized, I highly recommend it to all of you.

I will have much more to report next week. Until then, enormous thanks for making all of what we accomplished this week, and over the entire election season, possible. Keep the faith!

With gratitude and determination,