Welcome to the March 3, 2022 edition of Three Things Thursday! The Ukrainian crisis; Congressional leadership (or the lack thereof) on climate, water, public lands and democracy; and the latest on PFAS contamination–those are the Three Things this week. Let’s dive in!

As the crisis in Ukraine has unfolded over the past week, we have all been reeling from the senseless loss of life and Vladimir Putin’s blatant disregard of international laws and fundamental norms of international relations. The Michigan LCV staff and boards stand firmly with the people of Ukraine as the country grapples with the horror and violence inflicted by this devastating crisis. Our hearts also go out to Ukrainian people around the world directly and indirectly impacted by this conflict, including members of our own team who have extended family caught in the war.

With much of the Western world taking action against the Russian government through economic sanctions, there has been significant media attention on what the conflict will mean for the United States and Europe when it comes to energy costs. The Kremlin’s infringement on Ukrainian sovereignty and the subsequent sanctions will undoubtedly have a serious impact on fossil fuels and their costs, especially in the short term. While the most important thing is resolving this conflict as quickly and peacefully as possible, the conflict in Ukraine is a stark  example of the global need to move away from fossil fuels and towards renewable energy sources.

“We stand with the people of Ukraine… Russia’s act of war flies in the face of building a more just, equitable and safe future for all people. In addition to the catastrophic human cost, the economic ramifications of Russia’s invasion of Ukraine are a stark reminder that it’s time to double down on clean, renewable, domestic energy — not only to address the climate crisis, but also to end our reliance on volatile interests and polluting fossil fuels. Moving to a clean energy economy will provide greater economic stability, lower energy costs, and protect our national and climate security.”

For decades, clean energy has been acknowledged as a national security issue, with global dependence on fossil fuels forcing the United States and many other countries to compromise democratic norms, values and ideology in the name of energy security. Time and again the U.S. national security establishment has elevated oil and gas supply to the center of our strategic foreign policy calculations, and we have a long history of partnering with undemocratic regimes to sustain our addiction to oil and gas. Even as domestic production has increased, our economy has been left exposed and vulnerable to global commodity price impacts.

If it hasn’t been clear before, it is clear now: all levels of government and across the private sector, we must accelerate this transition to renewable and clean energy sources as quickly and equitably as possible.

We must take bold climate action at the federal level, and must also do so here right here in Michigan.  Gov. Whitmer’s MI Health Climate Plan, slated to be released in final form on Earth Day (April 22), will outline the near and long term plan in Michigan, focusing on tangible solutions that will create jobs and benefit human health.

Michigan can also take action immediately by passing common sense renewable energy legislation like community solar bills HB 4715 and HB 4716, and HB 4236 (which will remove the arbitrary 1% cap on rooftop solar in our state and allow more Michiganders to install solar panels on their homes).  This legislation will allow every-day residents to go about the work of protecting their homes, businesses, and neighborhoods from natural gas price shocks, while mitigating climate change and air pollution, and bringing wealth into their communities.

“Empowering Michiganders to invest in local clean energy — on their roofs and in their neighborhoods — protects them against the volatility and turbulence of international oil and gas markets. This is ever more true as Michigan’s major utilities turn to natural gas to produce electricity in addition to heating homes.”

As things continue to unfold in Ukraine, the most important thing, again, is ensuring that the crisis is resolved as quickly and with as little loss of life as possible. We must help Ukrainian families and communities now and in the aftermath of this violence, and we must work now to move away from our ongoing dependence on fossil fuels.

Yesterday, our partners at the national League of Conservation Voters released their 2021 National Environmental Scorecard, an assessment of how federal lawmakers from every state in the nation have been voting in relation to climate change, clean/safe drinking water and voting rights.

National LCV has published its annual scorecard for every Congress since 1970. The scorecard serves as a clear, impartial accountability tool representing the consensus of experts from more than 20 respected environmental and conservation organizations who, together, select the key votes upon which to score members of Congress. Like Michigan LCV’s state-focused scorecard and our broader Accountability Suite, the national LCV scorecard provides the reader with a clear understanding of which lawmakers are working to protect human health and the natural environment, and those who are not.

The past year in Congress was a tumultuous one both for our climate and our democracy. The 2021 scorecard includes important votes on legislation you might expect, like the Build Back Better Act and the John R. Lewis Freedom to Vote Act. But this is the first year in its 52 year history that the scorecard also includes scores on things we once took for granted in this nation:  the peaceful transfer of power and the outcome of elections.

For Michigan’s Congressional delegation, the 2021 scorecard is a celebration of positive votes cast on climate change, clean water, infrastructure investments, and voting rights.  I’m delighted to report that Michigan has several environmental champions in our delegation who received high scores for 2021. 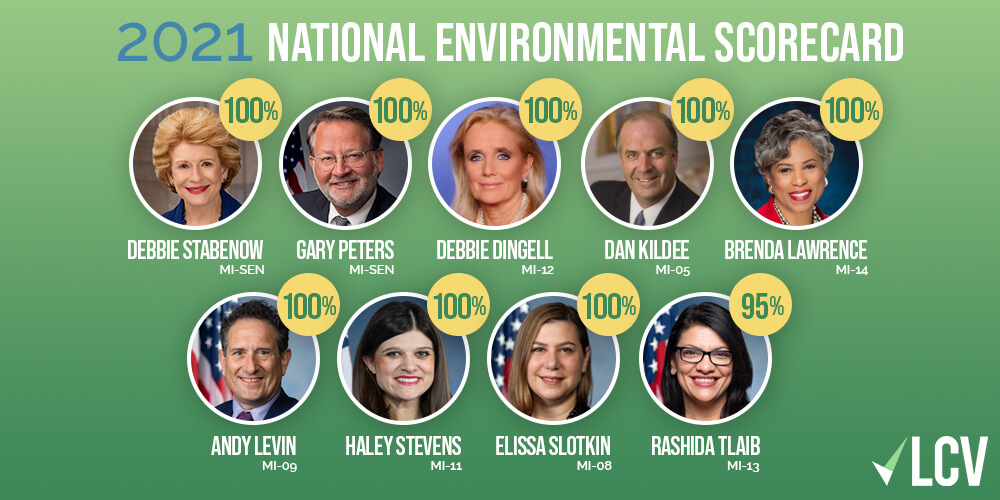 (Please note: Rep. Rashida Tlaib received a score of 95% due to a missed vote, not due to a negative vote. The missed vote was on a resolution supporting statehood for Washington, D.C., and Rep. Tlaib is one of the strongest supporters of D.C. statehood, even submitting a statement into the Congressional Record indicating that she would have voted in favor. The LCV scorecard includes an asterisk indicating her support and also explains why D.C. statehood is important for a healthy environment and democracy).

I encourage you to check out the 2021 National Environmental Scorecard and see for yourself how members of Congress voted on the important issues throughout the past year. Please share this resource with your friends, colleagues and family.  Given the proliferation of disinformation, tools like the National Environmental Scorecard, and the many tools in Michigan LCV’s Accountability Suite, are essential to understanding what’s happening in D.C. and Lansing and, in turn, key to holding elected officials accountable for their actions.

Amid everything else going on in our world, toxic PFAS chemicals continue to threaten drinking water, public land and human health in Michigan and around the Great Lakes.

In mid-February, the Wurtsmith Restoration Advisory Board hosted a virtual meeting where things got a bit heated between community members and Air Force officials.  Perhaps not a surprise to those in Oscoda – who have been advocating for both holistic remediation of the PFAS contamination and for a thorough study of the health impacts related to PFAS exposure for over a decade – Air Force officials “…continued to equivocate and deflect responsibility for exposure of veterans to PFAS at the former base.”

As Garret Ellison captured in his article  Air Force dismisses evidence of PFAS exposure to Michigan veterans, Air Force site manager Catharine Varley told the community members, “We are in charge of cleanup, not health.”  You can imagine how that landed.

As members of Need Our Water (NOW) Oscoda and the Great Lakes PFAS Action Network continue to push for both state and federal action to address the crisis impacting the area in and around the former Wurtsmith Air Force base, the residents of Oscoda wake up every day to the reality that their drinking water, public lands, and fish and wildlife have all been impacted by these “forever chemicals.”  There is talk now of a blood testing study in the area to ascertain impact, which is critically important given the array of health challenges that have been found in the area.

From a broader Great Lakes perspective, efforts to address PFAS saw movement last week when Wisconsin’s Department of Natural Resources voted to implement drinking water standards for PFAS chemicals. This is the state’s first-ever PFAS standard for drinking water was set by the WI DNR at a threshold of 70 parts per trillion, a much weaker standard than the recommended 20 parts per trillion.

I’m proud to say that Michigan has set much more stringent levels for two of the most understood chemicals in the PFAS family: PFOA at 8 parts per trillion and PFOS at 16 parts per trillion.  Michigan has also set specific standards for five other PFAS chemicals.  While both states are starting to pay enhanced attention and take (some) action to address widespread contamination, much more needs to be done.

At the federal level, the EPA recently announced that they are moving forward a process to develop national drinking water standards for PFOS and PFOA.  Please know that Michigan LCV, the GLPAN and PFAS advocates across the nation will be deeply involved, pushing for the strongest standards possible.

On Friday (tomorrow) morning, WEMU Program Director David Fair and I will discuss the PFAS crisis with Tony Spaniola, co-founder of the Great Lakes PFAS Action Network (GLPAN) and a leader within NOW Oscoda, on the March 2022 edition of 1st Friday Focus on the Environment.  I encourage you to listen in on 89.1 FM at 6:48 AM or 8:48 AM, or catch the recording later in the day.  We will dig into the latest developments in Oscoda, the PFAS contaminated beef in Livingston County and much more.  You can also learn more about the Great Lakes PFAS Action Network on their website.

Thank you for all you do to support our work. We could never do all this with you!