Welcome to the January 19, 2023 edition of Three Things Thursday! Today we celebrate the life and legacy of Dr. Martin Luther King, Jr., revisit the proposal to expand Camp Grayling, and take a look at our activist training program.

But, before we  jump in I want to flag an excellent TED talk I recently heard on NPR’s TED Radio Hour. The focus was fun, yes, FUN! Journalist Catherine Price gave a great talk on how fun is an antidote to stress.  The three main components of fun, per Price, are playfulness, connection and flow. If you have all three, you have fun! Price noted that when asked to describe “fun” one person described it as “sunshine”, the distillation of life’s energy.  It’s a great talk, and given all the stressors in our lives, I highly recommend you check it out.

Michigan LCV offices were closed Monday in observance of Dr. Martin Luther King, Jr. Day. On what would have been Dr. King’s 94th birthday, Michigan LCV staff took part in celebrations, marches, and community gatherings across the state as we honored the memory of an iconic champion for equality and civil rights who was taken from us far too soon. 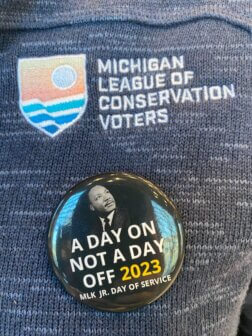 In Berkley, crowds of people turned out for a march honoring Dr. King. Michigan LCV deputy director Bob Allison and his family participated in both the march and the day of service activities, which included donations of canned goods and toiletries for homeless shelters in the area and the crafting of hand-made blankets. 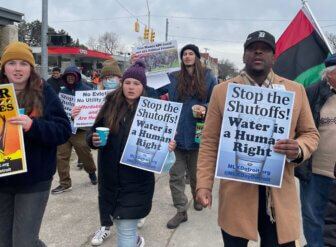 Nearby, Michigan LCV Advocacy & Outreach teammates Shannon Ervin and Lena Swirczek, along with our Partnerships Director Shannon Rochon, took part in the 20th annual Dr. Martin Luther King, Jr. Day march in Detroit. Large numbers of people turned out in our state’s largest city as well, carrying signs calling for a stop to water shutoffs and evictions, as well as recognition of indigenous rights. 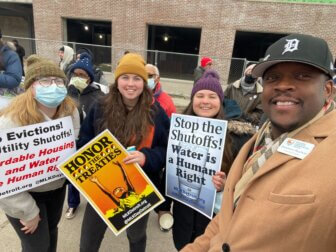 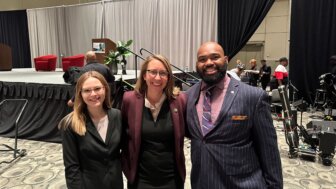 With dangerously divisive language and activities permeating our nation, taking Monday to celebrate and honor Dr. King’s incredible and inspiring life, work and legacy was more important than ever. I hope everyone was able to honor Dr. King in some way, recognizing both how far we have come and all that we must still do to ensure our country is a safe, inclusive place that works for everyone.

Earlier this month, I wrote about the Michigan National Guard’s proposed expansion of Camp Grayling and the potential environmental impact of the training facility. I emphasized the Department of Defense’s terrible track record on taking care of the lands they lease from our beautiful state, specifically in terms of the toxic PFAS contamination they have left behind and their complete lack of action to clean up the poisonous ‘forever chemicals.’

With Camp Grayling in close proximity to the Au Sable and Manistee River watersheds, the proposed expansion has been something Michigan LCV has been vocally opposed to for months, standing proudly by incredible river advocates/stewards like the Anglers of the Au Sable. Over time, increasing numbers of local governments, communities and local leaders have also stepped up to make their voices heard, saying “No!” to the National Guard’s plans.

Earlier this week, the Otsego County Board of Commissioners made its position official and voted unanimously to reject the expansion proposal while asking state leaders to follow suit. Otsego County joins a coalition of more than twenty nearby counties and townships that either oppose the Guard’s plans or are currently considering opposition resolutions. 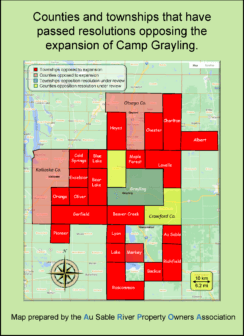 A map of local counties’ and townships’ stances on the proposed expansion of Camp Grayling (Credit: The Au Sable River Property Owners Association).

Although the public comment period has closed, Michigan LCV will continue to oppose this dangerous plan that could jeopardize some of the most pristine watersheds and forests in Michigan. If you are interested in the Anglers’ detailed rebuttal to the proposal, you can read that here, and if you are interested in the litany of unanswered questions, you can check that out here, also courtesy of the Anglers.

Stay tuned for more updates on Camp Grayling and the status of the Guard’s proposal in the coming weeks.

Michigan LCV has grown tremendously in recent years, both in terms of the size of our staff and our statewide (and beyond) membership. As we have grown, we have made conscious efforts to create programs to get more young people involved in the Conservation Voters Movement and our work to protect Michigan’s land, air, water, climate, public health, and democracy.

In 2021, Michigan LCV’s Advocacy & Outreach (A&O) team started the Our Water Activists program, a community engagement and training opportunity through a non-partisan community organizing lens focused on getting youth involved in the fight against climate change. Broken up into three, three-month cycles annually, the program offers real-world organizing and training pertaining to protecting our environment through community and nonpartisan political engagement. 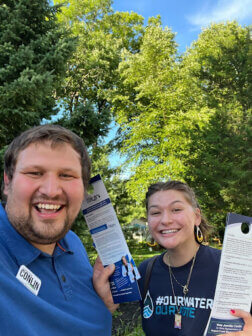 Michigan LCV’s Ethan Petzold with Our Water Activist Rachel Kriese as they spoke with voters at their  doors.

Mainly focused on engaging high school and college students, the program is open to anyone who wants to get involved, and I’m pleased to say that it has been an amazing success since it started! The program focuses on building power, presence, and relationships on behalf of our organization, and organizing community members to get involved in making the protection of Michigan’s land, air, and water a political priority.

As a young person, organizing for political change felt far removed from what I was capable of. Instead, I focused lots of attention on my own individual actions. However, Michigan LCV showed me that young and old people can accomplish things when we work together. The OWA program allowed me to take on more responsibility and feel trusted within the organization, and I feel much more prepared as a leader and activist at its completion.” – Lauren May, former Our Water Activist 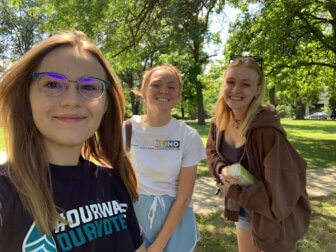 Michigan LCV’s Abigail Barker (left) and Jessica Schick (middle), who joined the Michigan LCV team after being introduced to our organization by the OWA program!

I’m delighted to say that we have announced our first three Our Water Activists recruitment cycles for 2023:

As dedicated readers of Three Things Thursday and supporters of Michigan LCV, I invite you to help spread the news!  Please tell someone in your life about the Our Water Activists program and encourage them to apply!

You can apply online by clicking this link>>>