Last Thursday, the Senate passed SB 814 24-14 after the bill was heard in the Senate Agriculture committee earlier that day. The bill, which was sponsored by Agriculture committee chair Kevin Daley (R – Lum), would grant a 5 cent or 8.5 cent tax credit to gas stations for every gallon of E15 or E85 gasoline that they sell, respectively. The Senate Fiscal Agency estimates the bill will cost the state at least $2.3 million per year, though others estimate less.

Ethanol-blended gasoline was once  purported to reduce climate emissions compared to standard petroleum products. However, a rash of studies have thrown that notion into doubt.

It is now also understood that Ethanol-blended gas emits more pollutants causing ozone, which is already at high levels during summer months.  Finally, perhaps most environmentally damaging is the impact of ethanol production on land and water.  Ethanol production requires vast amounts of land and water in order to grow enough corn to meet demand. One study found that 70% of corn ethanol is grown in states where it takes 10-17 liters of water to produce one liter of fuel.

At a time when inflation continues to put upward pressure on gas prices and people are feeling pain at the pump, the state legislature should invest in immediate, targeted relief for Michigan families – not tax giveaways to fuel suppliers and retailers that won’t be felt by drivers when paying at the pump. As we’ve written in previous editions of the Capital Catch Up, Michigan LCV urges the legislature to use the state’s unprecedented financial resources to invest in clean energy solutions that are insulated from the global oil market. We also support targeted tax relief efforts, like expanding the Earned Income Tax Credit as proposed by Governor Whitmer, that will actually help the people and families who need it.

“What Problem Are We Trying to Solve Here?” – Rep. Julie Alexander

In last week’s edition of the Capital Catch Up, Michigan LCV covered the House Committee on Local Government’s hearing on several bills that would rewrite Michigan’s aggregate mining policy. Senate Bills 429- 431, would remove local control over aggregate mining legislation in favor of establishing a state regulatory regime within the Department of Environment, Great Lakes, and Energy.

During the hearing, Rep. Julie Alexander repeatedly asked those testifying (and her fellow lawmakers) to answer a foundational question: “What problem are we trying to solve here?”. It is the most important question, and the answer proponents have repeatedly offered is that the state is running out of key aggregate materials to build its roads and bridges, and without access to more virgin aggregate materials, road construction costs will soar.

However, Michigan must also address another key problem: our state has finite, high quality soil resources and natural areas; aggregate mining operations degrade soil quality and local ecosystems to the point where the United States Geological Survey has said that restoration of the land to its original condition after aggregate mining is not possible.

This spring, Michigan LCV partnered with the Ford School of Public Policy to conduct research on different strategies to address both problems. The students found that the following policies could help decrease demand for aggregate mining and increase soil and ecological health after the mining process:

During an all-night session, the Michigan Legislature passed a $76 billion state budget last Thursday. The massive budget agreement, which will fund state department activities through 2023, but still leaves roughly $7 billion in federal and state resources on the negotiating table. Stay tuned for next week’s Capital Catch Up for a deep dive into the 2023 budget and an update on where budget negotiations go from here. 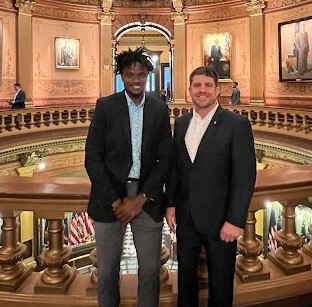 In the absence of federal action for aggressively limiting carbon emissions, states will remain the leaders in accelerating the transition towards a clean energy future. To meet the emissions reductions goals recommended by the International Panel on Climate Change (IPCC) and continue our commitment to green jobs, Michigan must implement decarbonization plans, like Gov. Whitmer’s MI Healthy Climate Plan, and use funding from the bipartisan infrastructure bill to invest in infrastructure that will reduce carbon pollution. 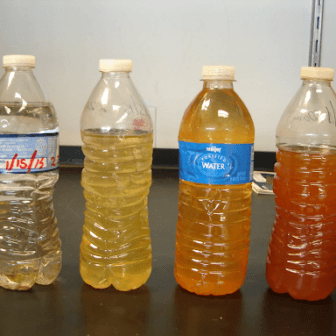 Water samples taken from various places in Flint during the height of the crisis. pic cred: Time Magazine

In a statement after the Court’s ruling, Solicitor General Fadwaa Hammoud said: “The citizens of Flint should know that these cases are not over. We still believe these charges can and will be proven in court.”

You can read more about the ruling here.