In the August and October editions of the Catch-Up, we discussed the National Guard’s proposal for a 162,000 acre expansion of Camp Grayling, the largest National Guard training facility in Michigan.

The proposed expansion has frustrated local community leaders, anglers and outdoor enthusiasts. The 231 square mile military complex is adjacent to the iconic Au Sable and Manistee River watersheds. Both are depended upon by Michiganders for recreational opportunities, including fishing, hunting, kayaking, birding and more. 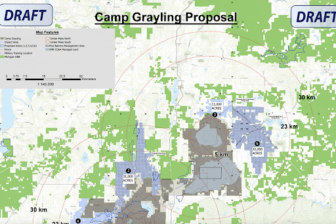 Michigan LCV and other opponents of the proposed expansion are concerned about environmental impacts and degradation of public land user-group experience.  The National Guard has stated the additional acreage would be used for experimental weapons testing, including electronic warfare.

We are pleased that the Michigan Air National Guard has extended its public comment period through January 14, 2023 as more Michiganders have become aware that in addition to the proposed expansion of Camp Grayling’s land acreage, the National Guard is also seeking to massively expand the military airspace over and near the camp.

With military aircraft flying as low as 300 to 500 feet – including F-16s, A-10s and KC-135 tankers, the Guard is saying the expanded airspace would also mean an increase in military flights.  Opponents are concerned about the impact of noise that more frequent and lower flights would have on Michiganders enjoying the natural area, and the use of chaff and flares, which degrade into magnesium oxide, chloride, and fluoride in the water. 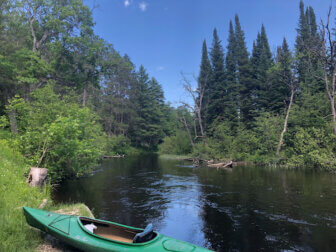 According to Mlive reporting, the Guard’s environmental assessment claims the expansion “would not have a significant impact on water resources,” and that wildlife  “are already habituated to aircraft activity without statistically significant differences in behavior and activity levels.”

With the public comment period extended through the middle of January, we encourage everyone to contact the Michigan Air National Guard and make their voices heard in opposition of the proposed expansion.

You can submit your comment by emailing [email protected] with subject ATTN: ALPENA SUA EA.

As 2022 comes to a close, Michigan LCV is looking ahead to the new legislature as we define our 2023 budget priorities.

With the new, pro-conservation majority coming into power in Lansing, 2023 looks to be chock full of opportunities to create change on the issues that matter most to Michigan families. While there is still uncertainty in how things will play out in the legislature, here is a sneak peak of a few of Michigan LCV’s top budget priorities:

Housing affordability is a top concern for Michiganders, especially as the cost of rent has skyrocketed in recent years. Affordable housing legislation is a top priority for Michigan LCV in 2023. With legislation already on the table, Michigan LCV would like to see more than $1 billion appropriated to create a program focused on funding energy weatherization and retrofits for low and middle income homes. These improvements would increase energy efficiency to drive down household energy costs while making homes healthier for Michigan families by removing lead paint, asbestos, and nob and tube wiring. Additionally, the improvements would increase community resilience in the event of extreme weather, protecting Michiganders from the accelerating impacts of climate change.

After taking an important first step toward funding drinking and waste water infrastructure improvements in 2022, Michigan LCV hopes to see at least $350 million to begin to address at scale Michigan’s stormwater infrastructure and management programs in 2023. This would include funding for green infrastructure and flood and damaging stormwater runoff mitigation. After the catastrophic flooding seen in Metro Detroit during the summer of 2021, funding to prevent and mitigate future climate change driven disasters is an essential budget priority.

Michigan LCV is keen to see some $400 million in funding dedicated to address drinking water affordability.  This priority is shared by Michiganders across the state who have had their drinking water compromised by contamination or have had their water shutoff due to unaffordable utility bills. This plan could provide grants to water utilities to pay off customer arrearages on the condition that utilities adopt water shut off moratorium. Additionally, utilities would be asked to disclose critical customer data – including water shutoff rates and encouraged to participate in processes to develop long-term affordable rate plans. In 2022 clean, safe drinking water is a basic human right, and lack of access to drinking water is a public health issue.  Check out We The People, Freshwater Future, and the National Wildlife Foundation’s recently completed study assessing water affordability in six Michigan communities.

Finally, among Michigan LCV’s top 2023 budget priorities is to robustly scale up funding for energy retrofits in state facilities, while fully staffing the state’s Office of Climate and Energy to capture federal incentives and infrastructure dollars in service of implementing Governor Whitmer’s MI Healthy Climate Plan.

Watch the Capital Catch Up in 2023 for a full list of Michigan LCV’s budget priorities!

BLOG – Looking Ahead to 2023 Action in Washington

“As 2022 comes to a close, we are looking forward to taking a breath and spending some time with loved ones, but also turning our attention to 2023. As we try to anticipate where the action will be in Washington, D.C. in the new year, three different areas jump out: 1) Biden Administrative climate action to achieve the emissions reductions that science demands, 2) Creating strong, pro-environment courts and agencies, and 3) Protecting environmental investments and initiatives from new attacks.”