Major Recycling and Materials Management Package Headed to the Governor

Last week was the last week of session for Michigan’s 101st Legislature, and as expected, this year’s Lame Duck period was – for the most part – uneventful. 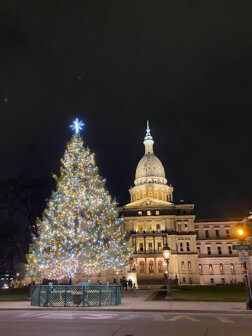 2022 State of Michigan Christmas tree in front of the Capitol on the last night of Lame Duck.

As discussed last week, Michigan LCV was monitoring several bills that were up for votes, but only one piece of priority legislation saw forward  action.

However, as highlighted in last week’s edition of the Catch-Up, chemical industry leaders (read: Dow+) were pushing for last minute amendments that define chemical incineration processes like gasification and pyrolysis as “chemical recycling”.  Industry is peddling the notion that these processes are advancing and in the future will be able to chemically alter used plastic products into new products in an economically viable manner; currently, these processes are mostly used to burn plastic in a very dirty process as fuel. 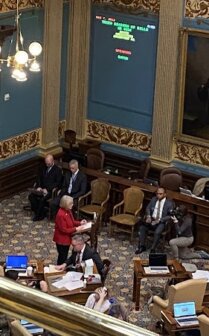 Sen. Rosemary Bayer (D- Keego Harbor) urges the Senate to accept her proposed substitution to return the package to it’s original form– without the pyrolysis and gasification amendment.

Ahead of the vote last week, Sen. Rosemary Bayer proposed an amendment to remove the chemical industry language and revert the bills back to their original House-passed form.  Her amendment failed and despite frantic lobbying efforts of Michigan LCV, Michigan Environmental Justice Coalition, MEC, Sierra Club, Ecology Center and other environmental groups the amendment was added to the bill package.

Introduced by Rep. Bill Sowerby in the House and Sen. Stephanie Chang in the Senate – and based on MI Affordable Healthy Homes plan – House Bills 6551–6552 and Senate Bills 1238-1239 would invest $1.65 billion in affordable, healthy housing options by creating a new home retrofit program and investing in all-electric appliances.

With housing affordability a major concern for Michiganders across the state, this package of bills is sure to be a top policy priority for Michigan LCV and the new legislative majority next year.

As 2022 draws to a close, there is a definitive pathway to get a historic bill over the finish line in this lame-duck session of Congress.

In what would be the biggest investment in the conservation of wildlife in a generation, the Recovering America’s Wildlife Act (RAWA) would also be the first and only federal conservation program to guarantee sustained funding to Tribal Nations for fish and wildlife preservation. Additionally, the bill will provide states across the country millions of dollars to fund projects that will help wildlife recover by restoring habitat, controlling invasive species, and reconnecting migration routes.

With control of the House reverting back to Republicans in the new year, there is an ongoing effort to pass RAWA in the two remaining weeks of session in Congress. Having already passed the House with bipartisan support and with 16 Senate Republicans as cosponsors, there is a clear path to get RAWA through to President Biden’s desk before 2023.

With just days left to get RAWA passed, please click here to send your Senator a message urging them to pass this historic legislation.

Over the weekend, Democratic leadership once again attempted to rally support for Senator Joe Manchin’s Big Oil permitting bill. Leadership had attempted earlier this fall to attach the “side deal” to the government omnibus spending bill but Republican senators refused to give Manchin a win he could use to help his re-election in 2024. This time around leadership sought to attach the bill to the Water Resources Development Act and then attach that to the National Defense Authorization Act (NDAA).”