Your Victory Against Pipeline Secrecy

You have a right to know about oil and gas pipelines running under the Great Lakes and through your own backyard. But earlier this year a bill known as the Pipeline Secrecy Bill (House Bill 4540) was poised to take away your access to critical safety information about pipelines in your community and across the state.

The bill was pushed by Enbridge Energy—that’s the same company that was responsible for the Kalamazoo River oil spill of 2010 and the same one that is currently under intense scrutiny for the age and condition of its Line 5 pipeline, which runs beneath the Great Lakes under the Straits of Mackinac.

Five or ten years ago, conservationists like us would have been nearly powerless to thwart this bill, but this time we had laid the groundwork and had a plan to stop it dead thanks to your support.

In 2014, Michigan LCV members like you helped elect a conservation champion who knew something was not right when this bill landed on her desk.

State Rep. Kristy Pagan (D-Canton) was hearing from Enbridge that–in the name of national security–no Michigander should be able to access any safety information about oil or gas 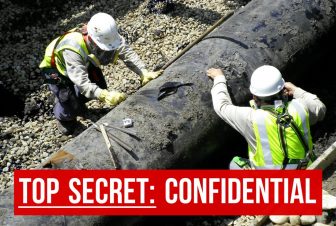 pipelines in our state.

Fortunately, Rep. Pagan understood that Michiganders deserve to have access to critical safety information about pipelines that run through their communities. That’s why Michigan LCV was able to connect her with one of her Republican colleagues who believes strongly in the importance of open, transparent government.

With champions on both sides of the aisle ready to fight, we activated voters and Michigan LCV members from across the state to galvanize a coalition of Democratic and Republican lawmakers who were ready hit the brakes on this bad bill. After months of persistent pressure, the bill’s sponsor agreed to strip all references to pipeline secrecy from the bill.

Because of your support and your action, critical information about the quality and safety of Michigan’s oil pipelines will remain available to the public. Congratulations!

This is an important victory and one that was only possible because members like you took action. Thank you!