Soaring gas prices as a result of the war in Ukraine and the looming midterm elections have reignited the debate over domestic oil and gas production. One of the last times this played out during the 2008 recession, a fracking boom led to the U.S becoming the largest oil producer in the world, capped off by the end of the crude oil export ban in 2015. Higher prices for oil and gas on the world market make expensive extraction methods – like shale fracking or tar sands oil – economically viable. The expanded production (and the boom-and-bust nature of drilling) have been disastrous for our climate, our communities, and our national security.

Russia’s war in Ukraine demonstrates yet another danger of relying on volatile fossil fuels. Our addition to dirty fuels is a threat to national security and puts the world economy at the whim of authoritarian leaders. While the U.S announced a ban on Russian oil imports Tuesday (in a worthy effort to deprive Putin of revenue), it is simultaneously seeking oil from other countries committing human rights atrocities. The Biden administration has turned to Saudi Arabia to help Europe’s energy situation as the horrors of the U.S backed Saudi war in Yemen continue.

Republicans (backed by the record profits of Big Oil) have doubled down on accelerating the climate catastrophe by calling for increased production of oil and gas. There is no doubt that high gas prices are very painful for people living paycheck to paycheck. Hoping to gain a political advantage from this pain heading into election season, a fresh round of advertisements, new legislative proposals and intensive lobbying efforts have begun to try to pin the blame on Democrats and open up new areas for drilling.

On one hand, these premises and accusations are false, for several reasons. The Biden administration is approving drilling on public lands at a faster rate than the Trump administration. It will take years for petroleum products from any new oil and gas lease sales to hit the market. In addition, oil is a global commodity, and U.S production has little to do with the price.

On the other hand, President Biden and climate champions in Congress are pointing out the simple fact that breaking our addiction to fossil fuels will also break the hold that petro-dictators like Putin have on the world. They are also pushing clean energy proposals and combating price-gouging to back it up. For the oil and gas industry, the facts don’t matter: whenever gas prices go up, they see dollar signs and a chance to lock in more years of drilling. 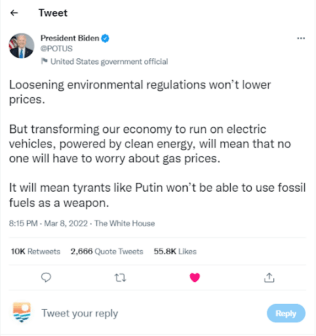 Make no mistake, these debates are coming to Michigan – or are already here. It will be very important for voters to see through the smokescreen (no pun intended) created by the oil and gas industry. We must support elected officials and candidates that know renewable energy is the solution to the never-ending cycle of volatile energy prices. For our climate, our economy, and for people suffering through war (spurred by dictators propped up by oil) around the world, we must rapidly transition to renewable energy.

You can watch a recording of the event here! Also checkout an interview Local 4 did with panelist Donele Wilkins that was shown during the event.

The panel discussion featured important information about the environmental injustices facing Detroit and communities in Michigan. As the planet warms, last year’s flooding is likely to be repeated. As federal resources are deployed to help residents deal with the impacts of climate change, it is imperative that historically marginalized and Black, Indigenous, and people of color (BIPOC) communities are prioritized. 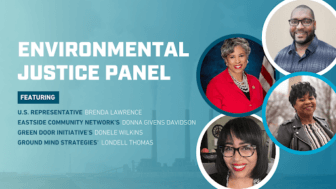