Gas Tax Holiday: In an effort to ease the burden of high gas prices, President Biden announced plans this week to appeal to Congress to temporarily suspend the federal gas tax. A gas tax “holiday,” however, might not make much difference in prices at the pump and would take federal dollars away from other important priorities. 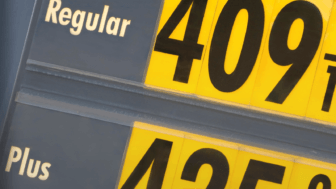 Senate Swindling: Tuesday’s January 6th committee hearing revealed that the chief of staff for Senator Ron Johnson (R – WI) attempted to pass a slate of fake “alternate” electors for Wisconsin and Michigan to then-Vice President Mike Pence, who was presiding over the certification of the 2022 election results. Additionally, former Michigan Republican Party Chair Laura Cox revealed that some Michigan Republicans planned to hide overnight in the State Capitol to try and secure false electors for Trump.

School Meal Waivers: After failing to extend school meal waivers in March, a bipartisan group of lawmakers in Congress led by Michigan Senator Debbie Stabenow have introduced the Keep Kids Fed Act before the waivers expire. The new legislation would provide relief for families and kids who struggle with food insecurity.

The Supreme Court is nearing the end of its summer work period and will release decisions on key cases before the end of next week on guns, abortion rights and the EPA’s ability to fight climate change. A common theme showing up in recent rulings is the willingness of the court to test the boundaries of new legal doctrines to overturn decades of precedent. Just yesterday the court fundamentally altered the relationship between church and state.

Read more about EPA v. West Virginia and the implications of the decision here. 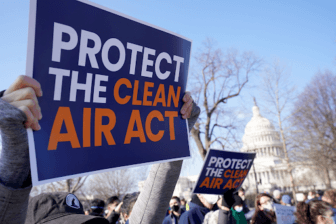 To fight back, Michigan LCV signed onto an Amicus Brief to protect the Clean Water Act in a case (known as Sackett v. EPA) that will be heard this fall. It’s worth noting that the EPA is working to redefine what is considered “Waters of the U.S.” – the waters protected by the Clean Water Act – but their proposed rule is not expected until November 2023 (according to a new regulatory roadmap released this week by the Biden Administration). 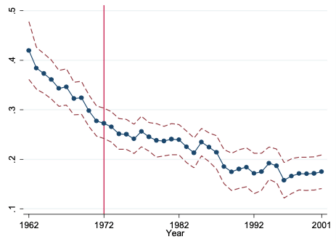 The figure above shows the proportion of bodies of water that are considered “not fishable” due to water contamination between 1962 and 2001. After the Clean Water Act was passed in 1972, bodies of water across the country have become cleaner and stayed clean. (Source: VoxEU).

If the court rules in the direction it’s been signaling, protections for our nation’s wetlands will be rolled back returning the country to an era where corporations are free to pollute our waterways. Read the press release here, and full brief here.

Michigan LCV hasn’t stopped (and will never stop) hustling to pass legislation that tackles climate change, reduces pollution, and creates a better way-of-life for everyone. Our latest effort was joining forces with many other advocates to urge members of the U.S. House of Representatives to sign a letter addressed to President Biden urging him to “do everything in his power” to reach a deal on a budget reconciliation bill that includes major climate investments.

Two Michigan climate events (one virtual and one in-person) are happening this Friday (June 24th):

Friday, June 24 1 p.m. – As part of Michigan LCV’s “A Closer Look” series, Dr. Jonathan Overpeck (Dean of the University of Michigan’s School for Environment and Sustainability) will speak on the topic of “Climate Change, Air Pollution & Petro-Thuggery” – register here. 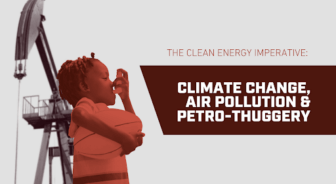 Friday, June 24 4 p.m. – Our friends at EDF Action are hosting a “Michigan Climate Rally & Kayak-tivist” Event this Friday on Belle Isle (the Michigan LCV team will be in attendance). We’ll hear from speakers like the Friends of the Detroit River, and then people will be kayaking at 5:15pm on the Belle Isle Lagoon. Kayaking is optional, and folks can bring their own kayak or rent one (with rental costs covered free-of-charge for those interested). For more information and to register, visit this link. 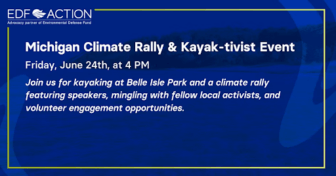