The Past Week in D.C.

Today, Supreme Court Justice Stephen G. Breyer announced his plans to retire from the high court at the end of the current term in June. At 83 years old, Justice Breyer is the Court’s oldest justice, and one of only three reliably liberal members. His retirement will allow President Biden to nominate – and all but assuredly confirm, given Democrats’ control of the Senate – a young, liberal nominee that can serve for decades to come. The President has already pledged that, if and when the opportunity arose, he would nominate the Court’s first ever African American woman.

On Sunday, Michigan Congresswoman Elissa Slotkin appeared on NBC’s “Meet the Press” to discuss her policy priorities and thoughts on the Democrats’ best strategy heading into the midterm elections. She highlighted specific issues, including the importance of tackling inflation, the need for expanded childcare support, prescription drug reform, public safety, and cost of living, while emphasizing the importance of achieving a smaller number of policy wins rather than trying and failing to accomplish all of the party’s priorities – “underpromise and over-deliver,” as she put it.

This week is a national week of action to continue building support for President Biden’s Build Back Better Act. While the critical climate and social spending legislation has stalled temporarily in Congress, the national push is important as Michigan LCV and countless organizations across the country work to get legislation across the finish line. What can you do? Go to https://www.climateactionnow.art/ to get some sample social media posts (with unbranded, artist driven artwork). Or if you know a local business that would want to sign on to a pro-Build Back Better Act letter, send them this form. Or just ask Bentley Johnson at [email protected] for more ideas.

Tonight at 7pm, Governor Whitmer will give the annual State of the State address. You can watch it live on local news or online here.

Michigan LCV Analysis: What does this mean for Michigan?

In a nearly two-hour news conference last week – just his 6th formal press conference since taking office – President Biden admitted that passing the House version of the Build Back Better Act (BBBA) would be very difficult given Senator Manchin’s continued opposition and Republicans’ lack of interest in actually governing – instead choosing to prioritize derailing the President’s agenda no matter how dire the issues or how popular they are amongst the American people. Recall, a similar and equally cynical strategy was employed by Senate Republicans during President Obama’s first term.

In the face of congressional opposition, President Biden suggested splitting the BBB Act into smaller chunks, one including climate provisions and the other social spending measures. The reason for this shift in thinking comes down to the simple fact that a vast majority of congressional Democrats, even Senator Manchin, have gone on record favoring many if not most climate provisions outlined in the BBBA. Even if some have concerns about specific policies, nearly all Democrats understand the critical nature of the climate crisis and know we have to do something now – meaning that passing an all-Democratic climate bill via reconciliation may be achievable.

Senator Edward Markey (D-MA), one of the biggest proponents in Congress for passing climate policy, stated in response to this strategy: “We don’t have another 10 years to wait. We should take what Joe Manchin said, take the climate and clean-energy provisions in the package that have been largely worked through and financed, and take any other provisions in any other part of Build Back Better that have the votes, and put them together as a package.” The social spending policies will, he said, “become the agenda that we run on in 2022 and 2024.”

Sen. Markey’s comments underscore the urgency to act now, with carbon emissions reduction benchmarks fast approaching. As Congress continues to hash out a federal strategy, Michigan is moving ahead with their own climate action plan. Governor Whitmer’s MI Healthy Climate Plan, which was released in draft form last week, positions Michigan to become a national leader in addressing the climate crisis through clean energy solutions that will help our state meet 2030 and 20240 carbon emissions goals and achieve net zero emissions by 2050.

Following the Department of Environment, Great Lakes and Energy’s (EGLE) release of the draft plan based on recommendations from the Governor’s Council on Climate Solutions, the department is seeking public input to inform revisions that will ultimately be sent to Governor Whitmer next month. Michigan LCV and partner organizations believe that this period of public comment is critical, as the final plan must include a more concrete timeline for clean energy solutions that will ensure we meet emissions targets in the coming years. Thus, our team is working hard to gather as many voices to the process as possible. You can add yours by sending a message to EGLE and attending the February 8th virtual listening session.

Despite challenges and frustrations over the past year, passing climate legislation prior to the 2022 midterms would be a huge step towards reaching President Biden’s critical goal of reducing greenhouse gas emissions by 50% below 2005 levels by 2030, and put us on a path to avoid the worst outcomes. In the meantime, as Governor Whitmer moves closer to her own reelection campaign, her administration hopes to position Michigan as a key leader in climate action.

Since the Build Back Better climate platform was announced last year, Michigan LCV has been working to broadcast a collection of stories that showcase Michiganders’ experiences with climate change and its accelerating impacts, and why now is the time to take meaningful climate action. Our Build Back Better for Us: Real people. Real stories. Real impacts story collection features the stories of a wide variety of Michiganders from across the state, all of whom share the belief that climate action cannot wait any longer. 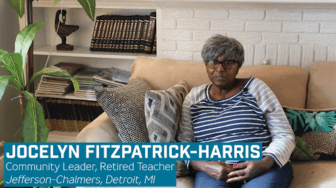 The latest story in the collection is that of Jocelyn Fitzpatrick-Harris and her husband Stanley and the impact that climate change and a lack of investment in infrastructure has had on them. As residents of Detroit’s Jefferson-Chalmers neighborhood for more than four decades, Jocelyn and Stanley have seen how the accelerating effects of our changing climate have impacted their community, with devastating, severe storms and floods becoming more and more frequent in recent years. With more than three feet of sewage-filled floodwaters in their basement now a common occurrence, Jocelyn and Stanley’s story illustrates the economic and human health damages that climate change is inflicting on our communities.

You can watch a video about how climate change has impacted Jocelyn & Stanley here.

Note to readers: This will be my last edition of Washington Weekly, as I will be leaving Michigan LCV at the end of the week to take over as the new Executive Director of the Huron Waterloo Pathways Initiative – the nonprofit arm of Washtenaw County’s Border-to-Border Trail.

Thank you for your support and readership of this newsletter over the past nine months. Drafting these weekly federal policy updates has been one of my favorite parts of my time at MLCV, and I hope you have enjoyed our coverage of the latest news on climate change, clean water, voting rights, and more. My awesome teammates will continue to bring you federal updates through this newsletter going forward. Be on the lookout for future editions of the Washington Weekly to come from Bentley Johnson, our Federal Government Affairs Director.