A big worry right now for many working families is how they will cover rising costs and pay their bills. Tuesday’s Consumer Price Index report revealed consumer goods are 8.5% higher than they were last year, including an 11% increase in electricity prices and 48% higher gasoline prices. How our politicians respond to the increased costs of living will have a big impact on the voting booth this November. Republicans continue to try and blame high gas prices on President Biden’s clean energy agenda. Democrats seem to be sending mixed signals but they have seen real traction in highlighting the shameless profiteering by the oil and gas industry as they take advantage of the situation to generate shareholder returns and bonuses for executives. 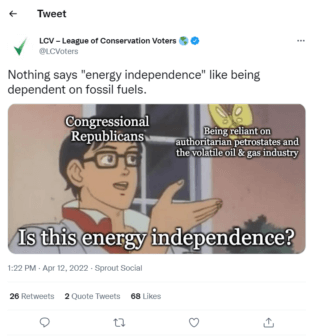 Many in the Democratic caucus have championed clean energy as the only way to true energy independence and as a way to reduce costs. Senator Sheldon Whitehouse  (D-RI) and Rep. Ro Khanna (D-CA) have introduced legislation to tax windfall profits of oil and gas companies to discourage price gouging. And efforts to call out Big Oil for their profiteering and price gouging (and Big Oil’s defenders in the Republican Party) is resonating with voters and the American public, as demonstrated by this in-depth survey from LCV and Climate Power.

Despite these efforts, many other proposed solutions for high gas prices are a mixed bag when it comes to the environment. As the NYT Daily podcast highlights, many policies coming out of the White House focus on producing more oil and gas. Examples include support for fining oil companies who do not drill fast enough on unused leases or allowing the sale of E15 ethanol fuel in summer (normally banned in the summer due to smog concerns, ethanol’s overall carbon footprint is even higher than traditional gasoline). A hearing in the House Energy and Commerce Committee last week had Democrats grilling oil and gas CEOs for price gouging…but also for not drilling more oil to lower prices.

Senator’s Joe Manchin and Kyrsten Sinema (have we mentioned them before?) were in the headlines this week speaking on the possibility of a revised climate bill. While touring oil and gas sites in Canada, Sen. Manchin stated:

“It demands the Administration and Congress, Democrats and Republicans alike, support an all-the-above energy policy because that is the only way to bring down the high price of gas and energy while attacking climate change.”

Yes, we were perplexed too.

Sen. Sinema, speaking to the Arizona Chamber of Commerce, quickly shot down the idea of raising corporate taxes to fund any climate or social spending bill as the Biden administration has proposed. “What I can promise you is that I’ll be the same person in negotiations if they start again that I was in negotiations last year. You all know, the entire country knows, that I’m opposed to raising the corporate minimum tax rate.” To pass climate jobs and justice legislation congress will have to reconcile Sen. Manchin’s desire to reduce the deficit with Sen. Sinema’s refusal to raise corporate taxes to do so.

It is worthwhile to explore short term fixes to alleviate pain at the pump, but missing this moment to advocate for a rapid transition to clean energy could waste a crucial political window to push through climate action. With U.S policy makers sending mixed messages, it is more clear now than ever that we need federal climate jobs and justice legislation to get us off of fossil fuels.

EARTHGANG: Earth Day is on Friday, April 22nd and we will be celebrating all week long – we want you to join us at one or more of the following events! [Did you know? A teach-in at the University of Michigan in March of 1970 was an important part of the creation of the first Earth Day]

Climate Action for the Great Lakes webinar on Wednesday, April 20th at 1pm: Michigan LCV is teaming up with LCV affiliates in the Great Lakes states on this virtual event, where we will hear from Congressman Dan Kildee of Michigan, Congresswoman Marcy Kaptur of Ohio, and other Great Lakes leaders on what we need to do to fight climate change.

Michigan Climate Plan Release: We expect that there will be a rollout event of the landmark Michigan Healthy Climate Plan on Thursday, April 21st in Traverse City, with the final plan released to the public the next day (Friday, April 22nd).

Earth Day Celebration in Royal Oak: A major climate march, rally, and Earth Day fair is going down on Saturday, April 23rd in Royal Oak hosted by the Turn Oakland County Green climate campaign (Michigan LCV is a supporter). The “Earth Fair” (with over 30 booths) will go from 9am – 1pm, with a Climate March at 10am and a rally with live music at 11am. Click this link for more details and to RSVP your attendance. We guarantee you’ll feel hopeful and energized after this celebration!

We hope to see you at some of these awesome upcoming events!