Welcome to the September 1, 2021 edition of Three Things Thursday! August has come and gone and the Michigan LCV team is ready to tackle what September has to offer.

This week’s edition of Three Things provides a look at the ever-dynamic redistricting process, the voter suppression petition drive announced by Michigan Republicans earlier this week, and a Line 5 fundraiser our team hosted in partnership with FLOW on Mackinac Island. I’ve also added in some information on our utility accountability work, for good measure. Let’s dive in!

Michigan’s redistricting process continues, with a robust meeting schedule and a shrinking timeline for the Michigan Independent Citizens Redistricting Commission (MICRC) to hear from Michiganders and draw district maps that will accurately reflect the communities that they encompass.

This week the MICRC is conducting their “Mapping Week,” the intention of which is educating Michiganders on how to submit their own proposed district maps as the Commission continues to seek input and works to define what districts will look like for the next 10 years. 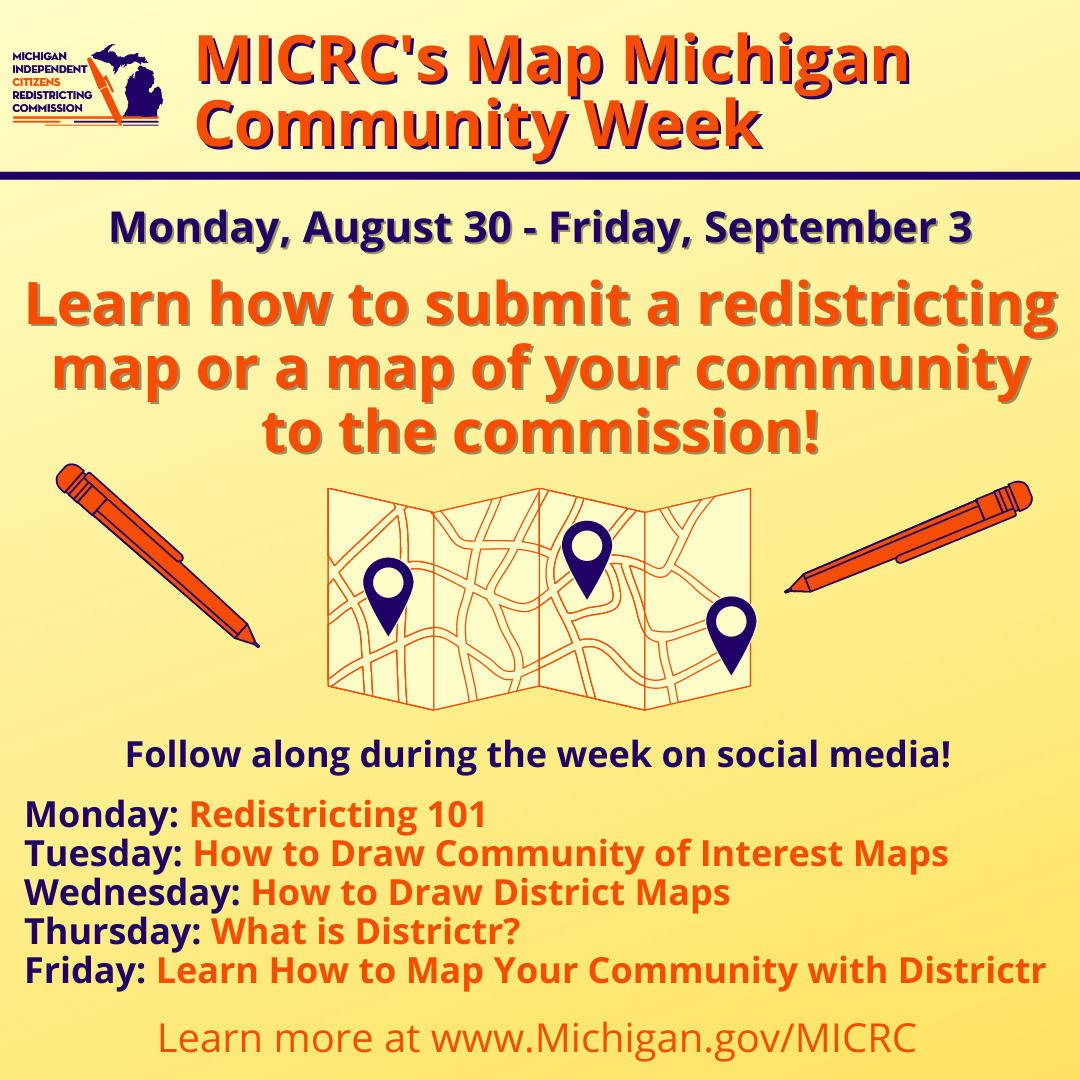 This is very important to the process given that the MICRC will complete the first round of map drawing on September 22nd.

If you haven’t already, I encourage you to submit your proposed district maps (and any other input you may have for the Commission) this week using their public comment tool.  You can also find resources and information about this week’s events on the Commission website.

As I’ve noted in past weeks, our Democracy For All coordinator, Mark Payne, has been deeply engaged with the Commission’s activities and public meetings. His presence at every single one of the Commission meetings has provided accurate and up-to-date information to our partners and members across the state, which has proven essential to our collective ability to mobilize Michiganders to make their voices heard.

Mark also recently testified before the Commission, calling for accountability and equity when it comes to the amount of time allocated in the consideration of districts and communities in different parts of the state. When the Commission indicated that it would provide a mere 9 ½ minutes for each state House District in Metro Detroit, which is Michigan’s most populous region, Mark made sure his thoughts became part of the public record. I’m happy to report that Mark’s comments were picked up by MIRS:

“The Detroit metro area is 40% of our population in Michigan and therefore it includes a significant amount of our state’s districts. Given the number of people within these districts, more mapping time is needed for this area.” – Mark Payne, Democracy For All Coordinator

Today, Mark is both observing and testifying at the Commission’s meeting in Ann Arbor given the MICRC agenda includes a presentation by the Commission’s voting rights specialist Dr. Lisa Handley on the (1) Voting Rights Act and (2) racially polarized voting data.  These two elements are part of the first of seven criteria (in order of importance) that the MICRC must consider in their map making.

If you can’t make the meeting –which runs from 5:00 to 8:00 PM in at the U of M Student Union– I encourage you to check out the recording of today’s meeting on the MICRC’s YouTube channel. 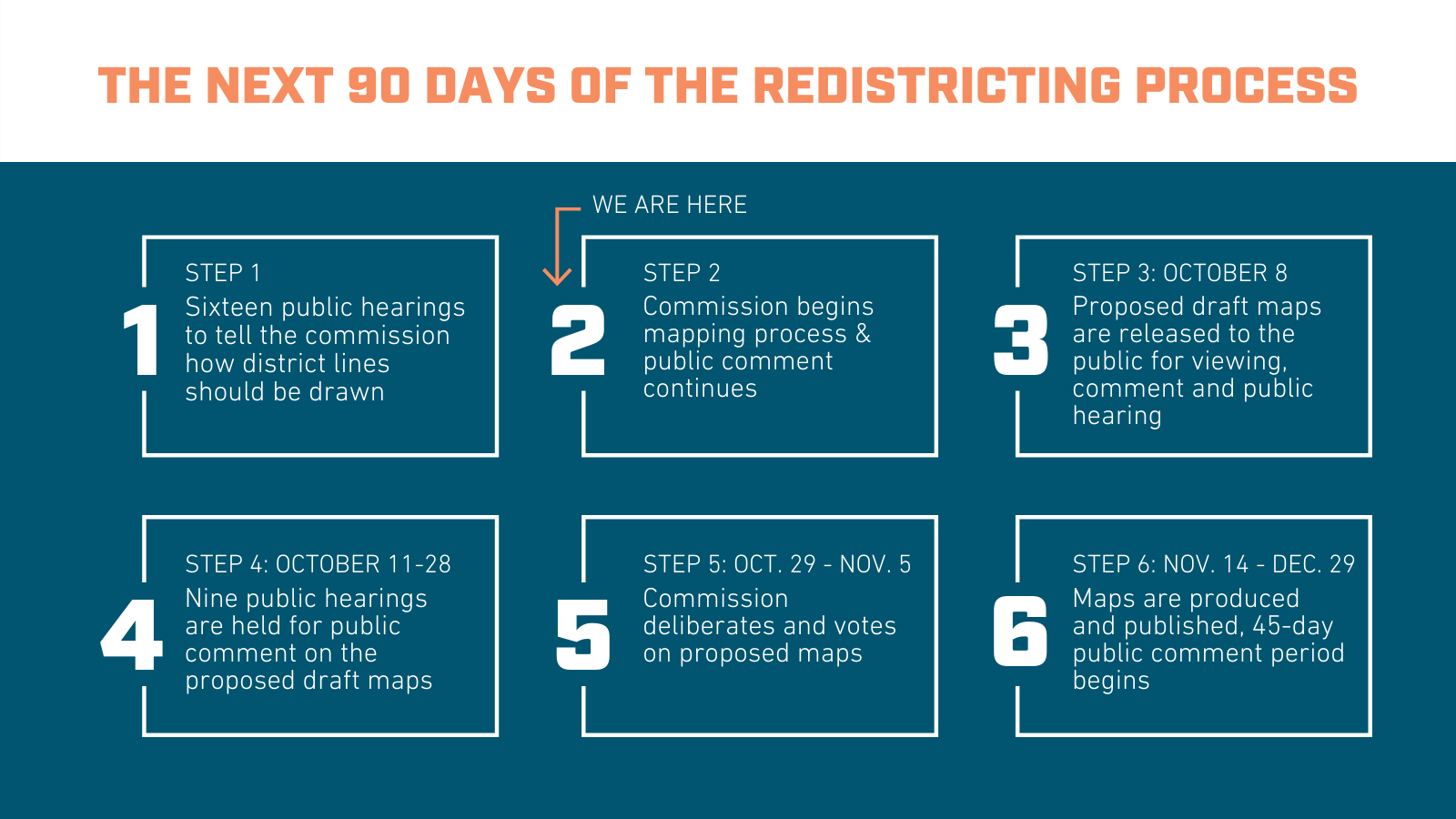 As the redistricting process continues to take shape over the next few months, here are some ways that you can get involved, engage with the Commission, and make your voice heard:

As the legislature’s summer recess comes to an end, Michigan Republicans announced the launch of a citizen-driven petition initiative to dismantle voting rights in Michigan and make it harder for all of us to vote.

Announced earlier this week, the petition initiative aims to accomplish the same priorities outlined in several bills currently under consideration in the Legislature, including restrictions related to voter ID requirements and limitations on absentee voting.

As you may know, Michigan has had an effective voter ID law on the books for decades, and absentee voting has been proven time and again to be safe, secure, and accessible for all Michiganders. These changes would severely restrict voting rights for Michiganders all across the state, while disproportionately impacting low-income communities and minority communities.

What is particularly egregious about this effort is that the MI GOP has said indicated that this will be a legislative initiative (and not a constitutional amendment), which means that if they collect the requisite number of signatures–and if those signatures are validated by the Secretary of State and Board of Canvassers–the ballot measure will go before the GOP-led Legislature, which then has 40 session days to adopt it or let it go on to the ballot.

And, yes, you guessed it: the MI GOP announced that they are launching this petition specifically to take advantage of the ‘legislative loophole,’ thus bypassing both the Governor, who would not be able to veto the measure, and voters, who wouldn’t have the opportunity to vote on it.

To make already awful matters worse, it is very likely that the MI GOP will add an appropriation to the ballot measure, which traditionally means that it can’t be overturned by a public referendum.

Now that the petition initiative has been announced, Michigan Republicans have six months to collect 340,000 from registered voters in Michigan, and will surely deploy misinformation and deceptive tactics to do so. Our Democracy For All team has been working with the WeVoteMI coalition of dedicated, pro-democracy partners over the course of the past many months to fight back against legislative attempts at voter suppression ever since the 39-bill anti-voter package was introduced in March. We have been anticipating this next move on the part of the MI GOP and we are prepared to combat this petition with everything we have.

Our main focus has been and will continue to be educating our families, friends, members, partners, and the public about the fact that our democracy and elections have been proven to be secure, safe and accessible. The broad coalition is now also launching a robust “decline to sign” campaign that will help push back against the Republican narrative that these changes to our election laws constitute “reforms.” We will also be working with a team of legal experts as we prepare to fight back against these anti-voter changes in the courts.

I encourage you to check out our Democracy For All team’s bi-weekly newsletter, the Democracy Drumbeat, for in-depth analysis on any and all developments moving forward!

Rest assured, I will keep you updated and engaged as things develop, making sure that you can join the fight to defend our democracy along with the Michigan LCV team.

On Tuesday evening, a group of concerned Mackinac Island residents held a joint fundraiser for Michigan LCV Education Fund and For the Love of Water or FLOW to support our ongoing collective work to shut down Enbridge’s dangerous, damaged, dual Line 5 pipeline.

Almost four months after Gov. Gretchen Whitmer’s shutdown order deadline passed in early May, the Canadian oil company continues to operate the 68-year-old pipeline that runs beneath the Straits of Mackinac, endangering our Great Lakes and economy, the drinking water for almost 15 million people throughout the region, and our way of life here in Michigan.

While I haven’t updated you on the continued fight to shut down Line 5 in a while, the Michigan LCV team has continued our deep involvement in the battle that is now lodged in the courts and in the court of public opinion.

Thanks to our hosts and three incredible board members — Lynn Brown, Gary Bice and Bruce Wallace, Tuesday’s event was a smashing success, with over 50 people (safely) in attendance. In addition to Liz Kirkwood (executive director of FLOW) and me, the program also included the engineering, scientific and legal expertise of Skip Pruss and Bruce Wallace, which the already well-informed audience appreciated immensely. 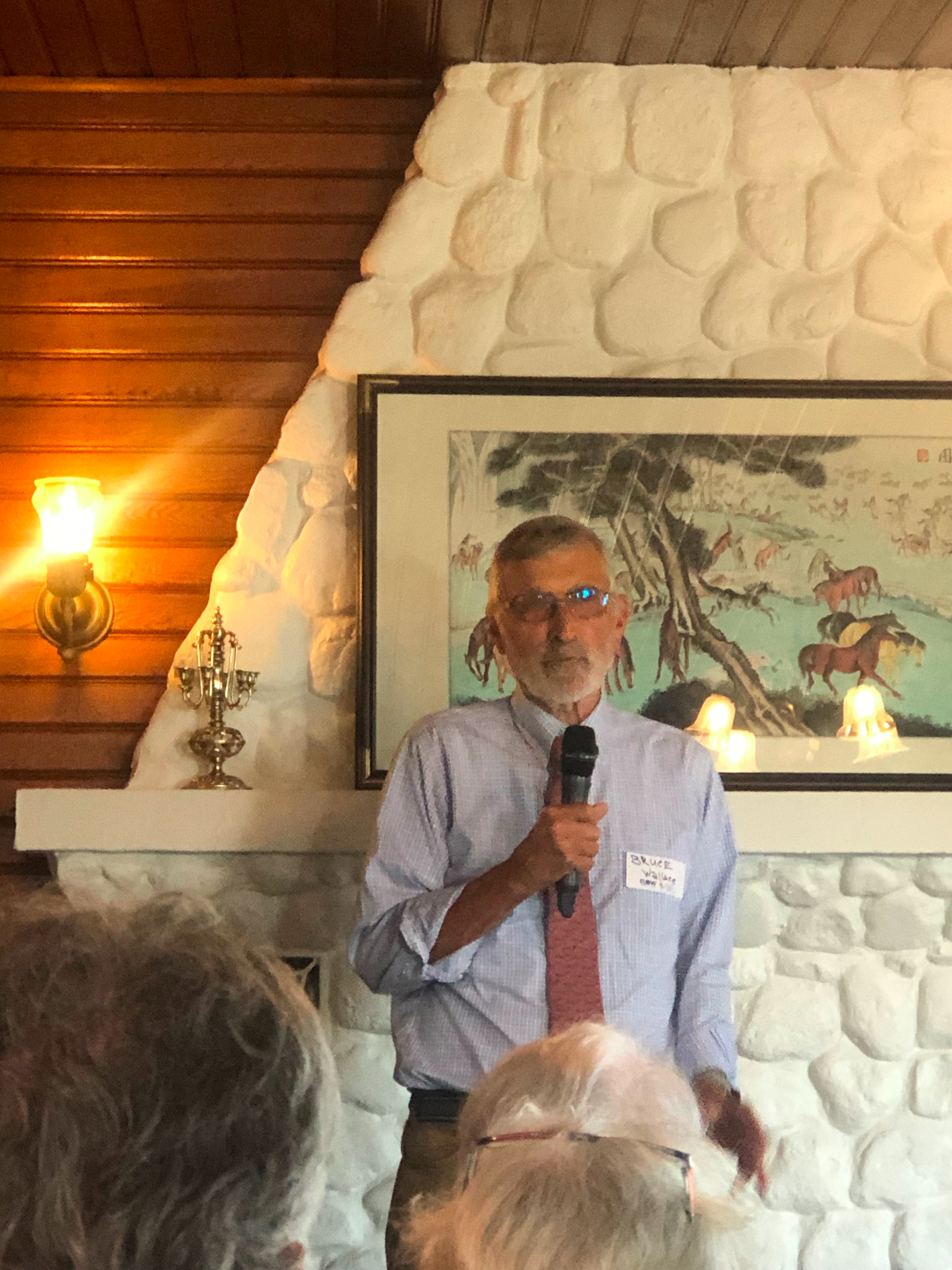 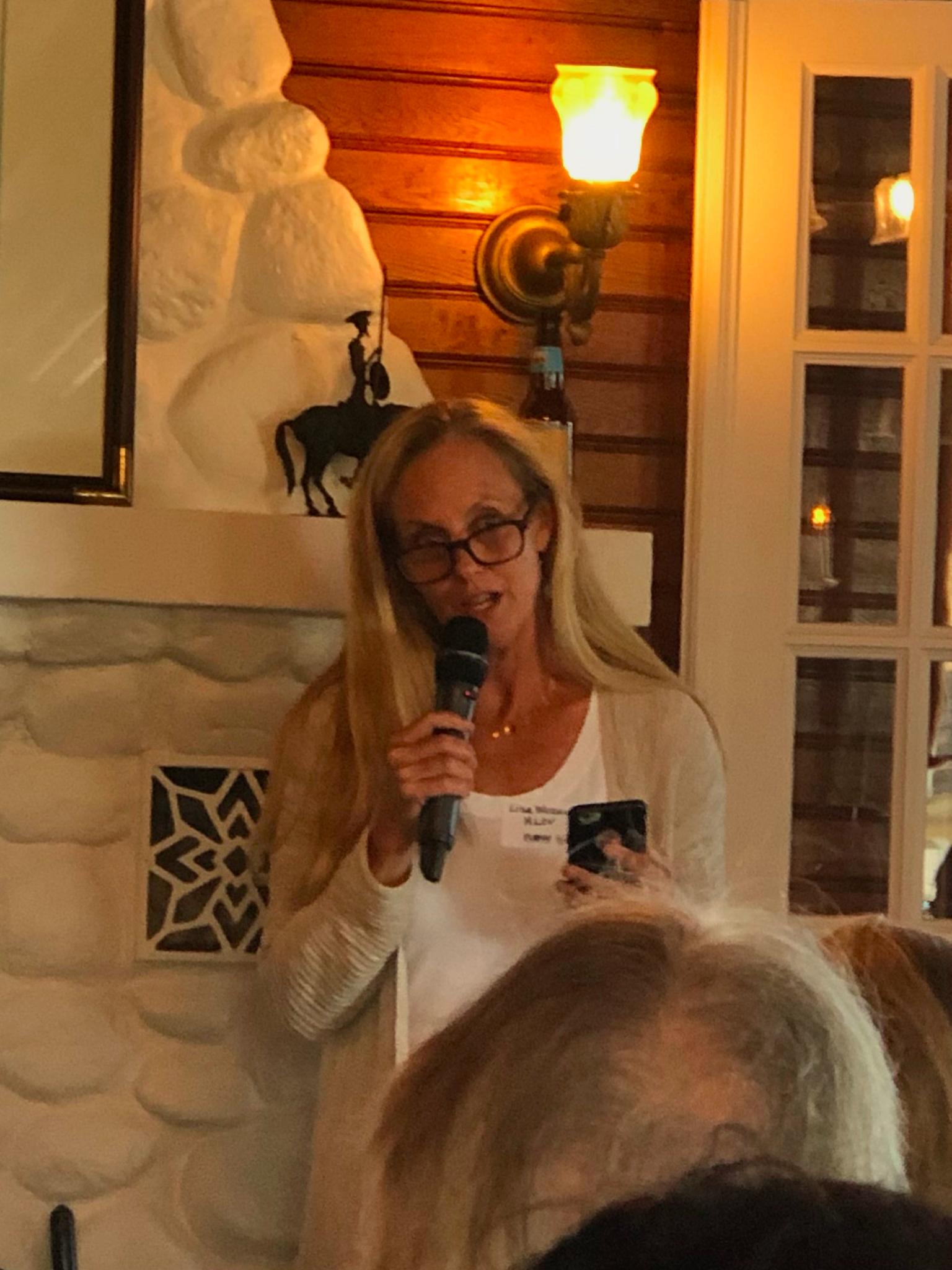 To top it off, it was a picture perfect day in one of Michigan’s most iconic places. It felt so good to all be together after endless months of Zoom meetings. 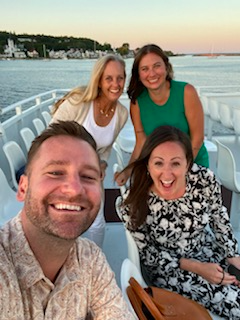 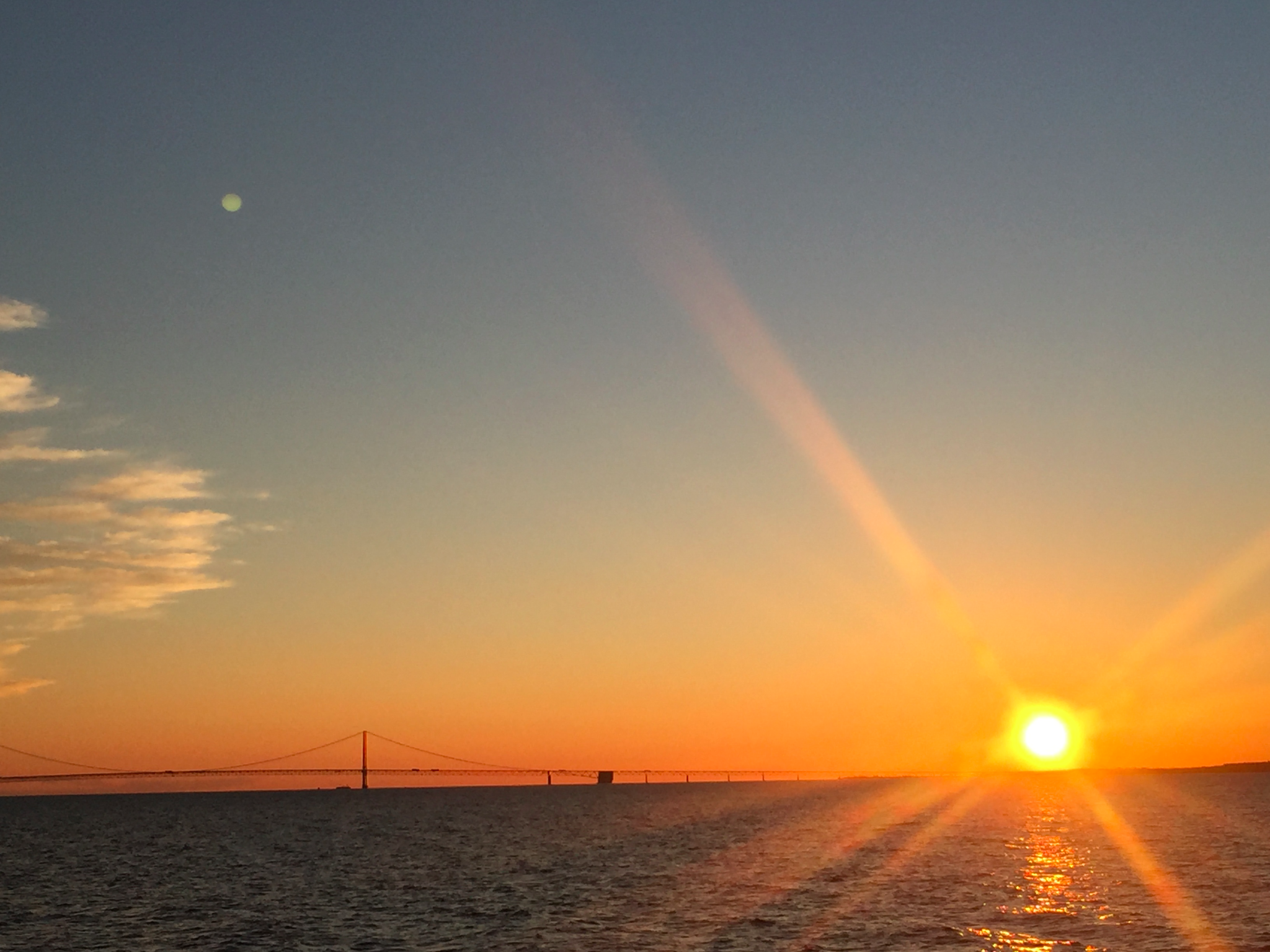 Sunset from the ferry on our return to Mackinac City

Please know that we will keep you very well-informed on Line 5 in the next couple of months as decisions begin being made in the legal world.

As I say every week–and I mean it from the bottom of my heart — thank you for all you do to support our work. It would not be possible without you.

P.S. Holding our electric utility companies’ feet to the fire

After massive power outages caused by severe storms in Michigan several weeks ago, our team has rolled up our sleeves to hold Michigan’s largest utility companies — DTE Energy and Consumers Energy — accountable.

The result has been numerous articles in the press, most of which have featured Michigan LCV Deputy Director Bob Allison.  Yesterday, as an example the Detroit Free Press published a piece entitled DTE Energy to spend another $70 million on tree trimming to prevent outages and Bob was quoted as saying:

“For years now, our residential rates have been skyrocketing, eating up more of family budgets, and yet all we get is more blackouts, longer outage times, and less reliability,” Bob Allison, deputy director for the Michigan League of Conservation Voters, said, adding that DTE seems “content to rake in massive, windfall profits while families and businesses across Michigan suffer without power.

This morning, Bob was a guest on Tim Skubick’s Off the Record, which will run on Sunday morning on WKAR Public Media. While the interview covered a number of issues, utility accountability was definitely a part of it. Check it out!

Finally, tomorrow morning at 6:50 AM, the September installment of 1st Friday Focus on the Environment, will air on 89.1 FM WEMU.   News Director David Fair and I will be interviewing Robert (Bob) Nelson, President of the Board for the Citizens’ Utility Board of Michigan.  I’m expecting a solid conversation about what the utilities are and are not doing and how Michigan utilities fair in relation to utility companies all over the nation.  Please tune in!

Before we move more fully  into September, I encourage you to check out this amazing August recap video created by our Creative Content Manager Samantha Schubert! Samantha, once again, did a fantastic job of pulling together key highlights, truly showcasing the work of the Michigan LCV and Michigan LCV Ed Fund teams. As you will see, we really have been “busy bees”! 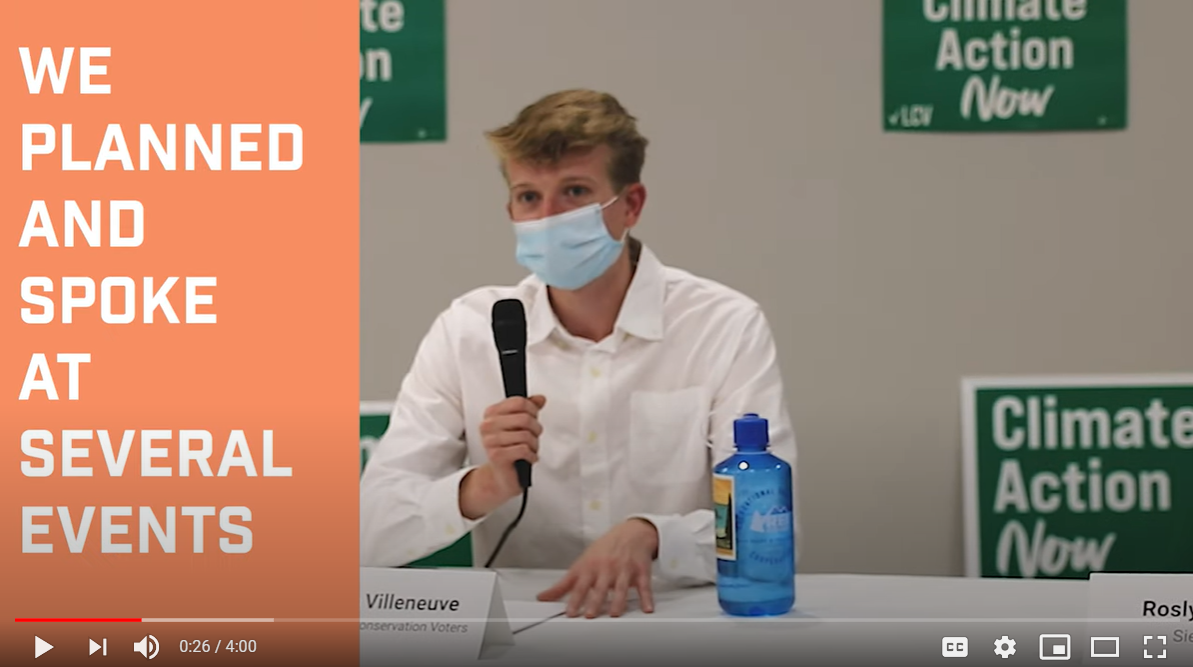 You can watch the entire video on our YouTube channel!