Welcome to the March 24, 2022 edition of Three Things Thursday! This week’s Three Things focus on big action in Lansing to protect our drinking water, DTE’s proposed rate increase, and windfall profit taxes for fossil fuel companies. But before jumping in I want to share a recent personal story.

On Tuesday night, I returned to Detroit from a quick five-day trip to SW Utah. I traveled with three dear friends and we hiked daily in the majestic Snow Canyon State Park.  We stayed at a wonderful place near St. George, and took advantage of guided hikes (with fun, talented, amazing, inspiring guides), which allowed us to explore all sorts of nooks, crannies and peaks that would have been hard to access on our own.

Snow Canyon State Park is a 7,400 acre scenic park defined by lava flows and soaring sandstone cliffs in a sun soaked, fragile desert environment. It’s located in the 62,000 acre Red Cliffs Desert Reserve, which was established in 1959 to protect the federally listed desert tortoise and its habitat. Archeologists tell us that the artifacts found there date back to 500 BC, and that it’s likely that humans have used the canyons for more that 10,000 years. 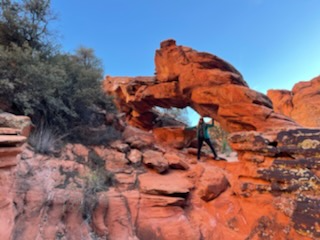 But amidst all the majestic views is the reality that human beings in the last 100 years have had a major impact on the planet and the place.  It is predicted by some scientists that the St. George community will run out of water in about 10 years. The region averages less than 8 inches of rainfall each year. Temperatures in the summertime can reach 115 degrees. And, what do you see as you peruse the area? New developments and golf courses that demand significant water use.

It was raining hard when we arrived back in Detroit on Tuesday night and I was grateful to see it and feel it.  I heard more birds in one short walk with my dog on Wednesday morning than all my days in Utah, and I saw more flowers emerging from the soil in my neighborhood than all of St George will see in a year. Utah is incredibly beautiful. But water is life.  I treasure what we have here in the amazing Great Lakes state. Let’s protect it!

Now, onto this week’s Three Things!

Following a late-night House Appropriations Committee session on Wednesday, the Michigan House and Senate both passed an expanded version of Senate Bill 565, critical water infrastructure legislation that the Michigan LCV team has been advocating for over the past several months.

Senate Bill 565 originally included $3.3 billion of investments for our drinking water, stormwater, and wastewater infrastructure, but the final version – which passed both the House and Senate with broad bipartisan support – was expanded to a total of $4.7 billion. With the additional funding coming from federal COVID relief, the Infrastructure Investment and Jobs Act (IIJA) and the state’s General Fund, the historic legislation now addresses other important priorities, such as funding for state and local parks, repairing roads and bridges and expanding broadband internet, in addition to cleaning up and protecting our water, overhauling outdated water infrastructure, and removing lead pipes.

Here’s how the investments break down:

The Michigan LCV team swiftly issued a statement applauding the bipartisan passage of legislation, which will be transformative for our water, our communities and state, as a whole.

This is a big win for Michigan and for our team.  After months of advocating for additional funding to address things like toxic PFAS contamination, SB 565 will be instrumental in ensuring Michiganders everywhere have access to clean, safe drinking water and will protect human health, not to mention create jobs and strengthen our economy.

The legislation is now headed to the Governor’s desk and we expect her to sign it as soon as tomorrow.

When severe summer storms knocked out power for nearly 10% of Michigan residents last year, millions were left in the dark amidst a global pandemic as Michigan’s utility companies – namely DTE Energy and Consumers Energy – scrambled to turn the lights back on. The widespread and prolonged power outages were the latest example of poor performance, over many years, by our two monopoly utility companies.

I know it’s hard to believe (or maybe not), but Michiganders deal with some of the worst utility service in the nation. Michiganders experience the most and longest outages in the Midwest, and Michigan utilities have the second-worst restoration time per outage across the 50 states – even on days without major storm events. On top of poor service, Michigan residents pay some of the highest rates in the Midwest.

But the bad news doesn’t stop there. A recent report from ProPublica found that DTE Energy not only raised rates six times since 2011 with little improvements to service, but received substantial federal COVID relief funding specifically to prevent shutoffs and, yet, shut off power for 208,000 homes between April 2020 and December 2021.  This is the same company that collected record profits throughout the pandemic, giving top executives million dollar bonuses while people all across the state faced economic and human health challenges.

While disregarding its poor performance and the financial realities confronting many of its customers (half a million DTE customers are living below the poverty line), DTE Energy is currently seeking another $388 million rate increase, as well as new mandatory fees for customers who want to install rooftop solar on their homes as part of the “distributed generation” residential solar program.

For those of you who read Three Things each week, you know that I’ve been emphasizing the dire need to end our dependence on fossil fuels, both to combat the climate crisis and address national security threats exposed by the ongoing Russian war of aggression in Ukraine. Not only would DTE’s proposal increase the financial burden for DTE customers while doubling down on fossil fuels, but the proposed fees for residential solar installations would make investing in rooftop solar impossible for many Michiganders at a time when we need to make renewable energy more accessible than ever.

The Michigan LCV team has been working to hold DTE and Consumers accountable for their poor performance and skyrocketing energy costs since last summer’s outages, and that work continues. After Attorney General Dana Nessel stepped in to reduce DTE’s proposed rate increase last year, the company’s newest proposals are currently being reviewed by the Michigan Public Service Commission (MPSC), which will ultimately make the decision.

The MPSC’s decision is incredibly important considering how the accelerating effects of the climate crisis are impacting Michigan communities. Instead of locking our state into years of continued dependence on fossil fuels, we need to make renewable energy as accessible as possible and clear the way for a clean energy future.

Since the Russian invasion of Ukraine began, fossil fuel production has been a hot topic, and one that has come up frequently in the last few Three Things Thursday.

There is no doubt that we are all feeling the effects of sky high gas prices at the pump, but this is not because of a shortage of oil. Fossil fuel companies have taken full advantage of the crisis in Ukraine to jack up prices and profit as a result. Americans, however, seem to have caught on to the fossil fuel industry’s ploy.

In a new poll released by the National League of Conservation Voters and Climate Power, 80% of voters in the U.S. support “placing a windfall profits tax on the extra profits oil companies are making from the higher gasoline prices they are charging because of the Russia-Ukraine situation.” This includes 73% of Republicans surveyed.

In addition to massive support for the windfall profits tax, 87% of voters surveyed voiced their support for the Biden administration and Congress to “crack down on price gouging and excessive price increases by oil companies that result in higher gas prices at the pump.” This sentiment is loudly echoed by the climate and environmental community. In a New York Times article this week, LCV’s senior vice president for campaigns Pete Maysmith was quoted as saying: “They’re jacking up prices, and people see that,”

The results of the LCV and Climate Power poll show that Americans are paying attention and want to change the legacy of fossil fuel profiteering. Even if some do not have the climate crisis front of mind when voicing their concerns, levying a windfall profits tax on oil and gas companies would be an important step in addressing the burden of high gas prices for Americans.

It’s been a big week, and there’s one more day to go.  Thank you, as always, for all you do to make our work possible.