Welcome to the December 9, 2021 edition of Three Things Thursday! As we near the holidays, the Michigan LCV team continues to be full steam ahead on a number of important issues. This edition of Three Things examines Michigan LCV’s ongoing accountability campaign for rooftop and community solar in our state, an important update on Michigan’s redistricting process, and the latest in the fight against toxic PFAS contamination in Michigan and across the Great Lakes region.

For the past year, Michigan LCV has been running a layered lobbying and public pressure campaign in an effort to pass House Bill 4236, which would remove our state’s unnecessary, outdated restrictions on rooftop solar.  In November, we launched a second phase of the campaign focused on the House Energy chair Rep. Joe Bellino of Monroe and holding DTE and Consumers Energy accountable for their actions.

The latest phase of our campaign has included ads on radio, print, and social media platforms, patch-through calls from constituents to Rep. Bellino’s office, and an earned media action in Lansing.

A key focus of our messaging is DTE and Consumers’ outsized political spending, and whether that is leading Rep. Bellino to block movement on this bi-partisan legislation.

Over the past five years, Rep. Bellino has collected over $78,000 from DTE and Consumers Energy, allowing these utility companies and special interests to determine Michigan’s renewable energy agenda, and doing absolutely nothing to lower our skyrocketing energy rates.

Michigan is the only state in the nation that has a restrictive cap on rooftop solar. For years, DTE and Consumers Energy have falsely claimed–to lawmakers and the media–that non-solar customers are providing a “subsidy” for their rooftop solar neighbors. This blatant disinformation has been directly refuted by the Michigan Public Service Commission (MPSC) on several occasions, both in testimony and in a report released in November.

The current solar/ “distributed generation” cap — which, again, is the most restrictive in the country — must be removed or it will have major impacts on our competitiveness, clean energy jobs and options for Michigan customers to lower their energy bills.

Meanwhile, according to independent reports, Michigan has the highest energy costs in the Midwest and the worst performance in the Great Lakes when it comes to outages. We saw this firsthand with the storms over the summer that wiped out power for nearly a million people, in some cases for almost a week. And, what have DTE and Consumers Energy done? They have raised electricity rates by hundreds of millions of dollars over recent years while doing nothing to improve service, reliability, or address frequent outages.

Michigan LCV’s campaign, aimed at changing the current solar energy landscape and holding Rep. Bellino, DTE, and Consumers Energy accountable, debunks ridiculous claims made by utility companies with hard-hitting ads about tax incentives, Bellino accepting large sums of money to fund golf outings, and billboards in the House Energy Chair’s district near Monroe, also the location of DTE’s corporate headquarters. Along with radio and newspaper ads, and direct mail to Bellino’s constituents, the campaign has catalyzed a flood of calls into the Representative’s office calling for a vote on House Bill 4236.

On Wednesday, members of the Michigan LCV team joined Michigan United and Uncle Pennybags the Monopoly Man on the steps of the Capitol in Lansing for a press conference to bring attention to utility companies’ big contributions to Rep. Bellino and call for a vote on House Bill 4236. 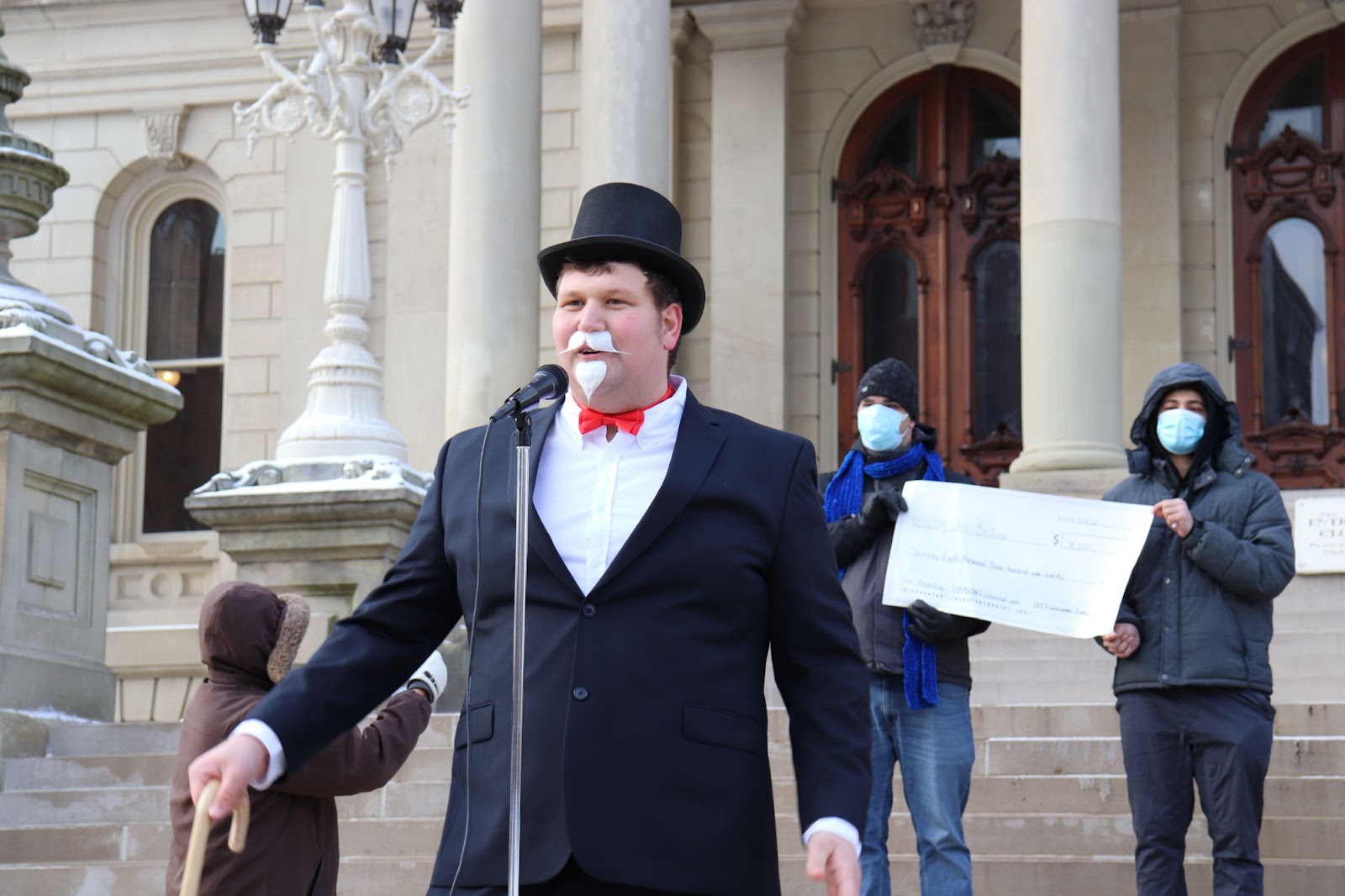 Along with the press conference, the group went to Rep. Bellino’s office to hand deliver a big  $78,000 check representing all of the money he has accepted from utility companies while refusing to deliver meaningful change that benefits Michigan customers. 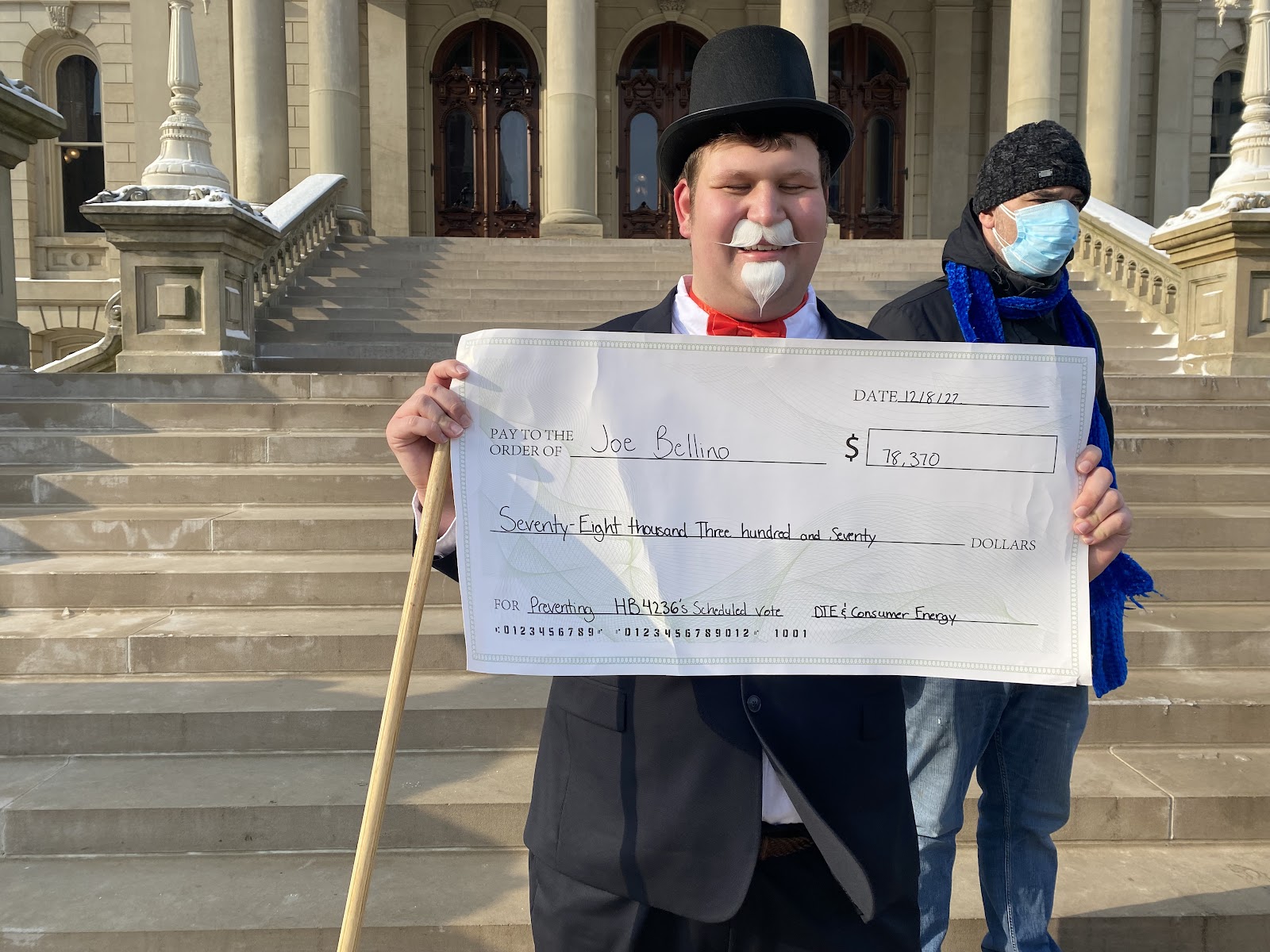 We will continue to hold lawmakers accountable – Democrat and Republican – who put utility companies’ interests over the peoples’ interests. Lawmakers are poised to head home for the holidays next week, but you can count on Michigan LCV to continue our work on this issue in the New Year.

The redistricting process is nearing the end of a 45-day public comment period on nine proposed collaborative maps the Michigan Independent Citizens Redistricting Commission (MICRC) voted to move forward, along with six of the commissioners’ own individual maps. As they stand currently, the Commission’s proposed State House maps do not reflect sufficient partisan fairness scores or fairly represent minority communities, both of which are key requirements for the Commission to consider when drawing the new State House, State Senate, and Congressional maps that will be used for the next decade.

In their current form, the maps “dilute majority-minority districts and strip the ability for minority voters to elect legislators who reflect their community and affect any meaningful opportunity to impact public policy and lawmaking,” per the Michigan Department of Civil Rights.

Michigan LCV’s Democracy For All team has been closely following the redistricting process since the Commission’s inception, and we are of the opinion that the current State House maps must be altered to reflect key requirements outlined by the Voting Rights Act (VRA) and partisan fairness scores.

Only one opportunity remains for Michiganders to provide verbal public comment to the Commission before they plan to vote:  December 16th at Cadillac Place The final vote is tentatively planned to take place between December 28th and December 3oth.

I will note, the Commission came under fire recently for holding a closed-door meeting in late October, during which commissioners discussed whether or not to release two memos relating to the Voting Rights Act and historical discrimination of minority voting populations in Michigan. On December 2nd, the Commission — at the advice of their legal counsel — voted to not release the two memos, a decision that has led to objections from many, including Attorney General Dana Nessel, Secretary of State Jocelyn Benson and major media outlets.

As always, I will keep you updated on redistricting developments over the next several weeks, including over the holidays. I also encourage you to check out the latest edition of the Democracy Drumbeat for a detailed analysis of the current maps and for more information about actions you can take as the Commission inches closer to a final vote.

After the Michigan LCV team helped launch the Great Lakes PFAS Action Network (GLPAN) — a new coalition of PFAS-impacted individuals and organizations striving to catalyze action to address toxic PFAS contamination — and subsequently GLPAN’s policy agenda, our communications and Advocacy & Outreach (A&O) teams continue to work to elevate the organization and promote the urgent need to address the PFAS crisis in Michigan.

Our efforts have been centered around strategic communications and paid digital ads on social media platforms, as well as outreach by our A&O team to interested individuals and impacted communities.

As GLPAN becomes known, there has been some stellar media coverage. Last weekend, the Detroit Free Press published an opinion piece by GLPAN member Robb Kerr promoting the organization and policy agenda and calling for immediate, meaningful action from elected leaders at all levels of government — both in Michigan and Washington, D.C. — to address the ever-growing PFAS crisis that has impacted so many. Robb Kerr, an Ann Arbor resident, has dealt with PFAS contamination himself, and his article last week was a fantastic addition to the work being done to thrust this critical issue into the spotlight.

As GLPAN keeps a full court press to elevate PFAS contamination and catalyze action, GLPAN co-chair Tony Spaniola testified today before the Senate Homeland Security and Governmental Affairs Committee during a hearing on federal efforts to take action on PFAS. Tony delivered powerful testimony before the Committee, which is chaired by Michigan Senator Gary Peters, describing the intense impact that PFAS contamination has had on his community in Oscoda, where widespread PFAS at the former Wurtsmith Air Force base has led to “do not eat” notices for fish and wildlife, undrinkable water, and health complications for residents, including cancer. Tony’s testimony stood in stark contrast to that provided by officials from the Department of Defense who continue to skirt responsibility. After decades of inaction in places like Oscoda, the Department of Defense and the Air Force continue to avoid blame for the PFAS contamination and its impact on area residents, and refuse to take action to address the crisis. Here’s a great article covering this hearing, entitled Pentagon PFAS cleanup is “bureaucracy run amok”, advocate testifies.

Gov. Gretchen Whitmer’s announcement in late October that Michigan would finally limit the purchase and use of products containing PFAS chemicals was a fantastic step in the right direction, but meaningful action on the federal level is needed to ensure our land and water is kept clean and safe, and the health of our communities is protected.

I encourage you to learn more about the PFAS crisis and check out the Great Lakes PFAS Action Network’s website for information about how you can get involved and take action.

As always, thank you for all you do. Until next week…