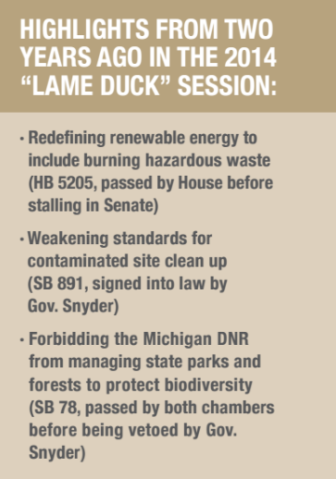 So many bad ideas, so little time

In the last few weeks of the year following an election — during what is known as the “Lame Duck” session — the Michigan legislature is known for ramming through controversial and unpopular laws because they will no longer face electoral consequences.

Here are some of the likely “Lame Duck” issues we are preparing to take on this year:

Michigan’s energy policy has been debated in Lansing for nearly two years now. Both chambers have passed bills out of committee, but if the Legislature wants to pass new energy legislation this year it’s going to be a full-on sprint between now and December 31. That means we’ll need your help to keep pressure on your representatives in Lansing to make sure that clean, renewable energy continues to be a critical part of our state’s energy future. We’ll keep you updated in the months ahead because your ongoing engagement will be critical to winning this fight.

Michigan lawmakers are looking to reward AK Steel — the owner of a large steel mill in Dearborn (near Detroit) and a chronic illegal polluter — with a massive $50-60 million tax break via House Bills 5557 and 5558. We have been working with allies this year to push for changes to the bills that would require AK Steel to comply with state and federal air quality standards in order to access the tax breaks. With your help, we can secure these changes, and make a lasting difference for nearby families who are dealing with the often devastating health impacts of chronic air pollution.

No Stricter Than Federal >>

House Bill 5613 would prohibit state agencies from adopting or creating rules that are stricter than federal minimum standards. Under the bill, a more stringent state rule would be permitted to address emergencies only if the state agency determines there is a “clear and convincing need” to exceed the federal standard. In the wake of the Flint water crisis, the last thing we need is a state law that makes it more difficult to develop rules that adequately protect our clean water and Great Lakes. This bill is incredibly reckless and we will fight tooth-and-nail to ensure it does not become law.

Senate Bill 591 was passed out of the Senate but has yet to move through the Michigan House. The bill essentially creates a new regulatory standard for small scale copper mines, which include significantly lower environmental standards. Because we don’t have the votes to stop the bill entirely, we have been focused on working with allies in the House to improve it before it passes. This is the sort of work that isn’t flashy and doesn’t grab headlines, but it can make a big difference for our state’s rivers, lakes and wetlands. Your support makes this work possible.

Part of what makes “Lame Duck” so chaotic is that issues that have been quiet for months — even years sometimes — will pop back up seemingly out of nowhere. That means we need to stay extra vigilant to protect our state’s land, air and water.