Celebrating the 50th Anniversary of the Clean Water Act

While most people remember the Cuyahoga River in Cleveland, OH catching fire in 1969, we often forget that a river in Detroit went up in flames that year as well. On October 9, 1969, the Rouge River was ablaze as oil and flammable debris caught fire near I-75 in southwest Detroit, pointing to the massive problem of unchecked pollution of our water and setting off alarm bells over the need to do something. 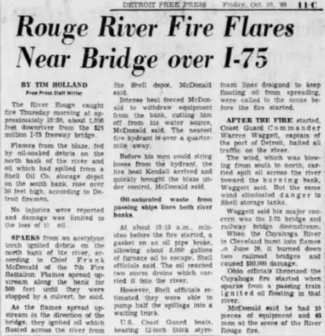 Now, on the 50th anniversary of the Clean Water Act (CWA), it’s important to remember how the River Rouge fire catalyzed action to clean up and protect our nation’s waters and look ahead as a landmark case being heard by the Supreme Court could strip away the protections of this historic legislation.

With a deep commitment to the conservation of our land and water that was inspired by a love for hunting and fishing in his youth, late Michigan Congressman John Dingell was angered by the River Rouge fire and other water-related environmental disasters across the country in the late 1960s, an anger that was shared by the public. It was this anger that catalyzed Dingell and other environmental advocates in Congress to push for legislation that would help protect and clean up waterways, leading to passage of the Clean Water Act in 1972.

Since its passage 50 years ago, the Clean Water Act has been instrumental in allowing us to restore and maintain the chemical, physical, and biological integrity of the Nation’s waters, creating healthier watersheds across the county. Much of the benefit afforded to us in efforts to protect our water and remediate pollution is thanks to the work Congressman Dingell did, and in just the Rouge River watershed alone, more than $1.7 billion has been spent on remediation and clean-up efforts since 1985 that have revitalized the river, surrounding ecosystems, and adjacent communities. 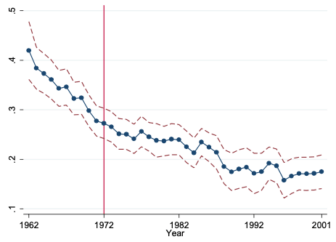 The figure above shows the proportion of bodies of water that are considered “not fishable” due to water contamination between 1962 and 2001. After the Clean Water Act was passed in 1972, bodies of water across the country have become cleaner and stayed clean. (Source: VoxEU).

While much more work remains to be done to fully safeguard and conserve water across the country, the case study of the Rouge River is a testament to the Clean Water Act and the work that Congressman Dingell and other elected leaders have done to protect our water.

Despite the monumental achievements of the Clean Water Act, it is under attack and there is a very real threat that it could be weakened through a Supreme Court Case that is currently on the docket.

You may remember earlier this year, the Supreme Court ruled against the Environmental Protection Agency (EPA) in a case involving the agency and West Virginia over regulation of carbon emissions. The court is now considering Sackett v. EPA, a case that has the potential to gut the Clean Water Act and leave our nation’s waters vulnerable once again to unchecked pollution from corporations and other entities.

As we witness a fundamental shift in how the court sees the role of the federal government, how the court rules in the case could have massive implications for the protection of land, air, and water which has relied on landmark legislation like the Clean Water Act. In short, the ability of the federal government to enforce regulations and protect our water hangs in the balance. The court is expected to issue a ruling in the Sackett v. EPA case before the end of the year.