One week after the State House of Representatives passed HB 5570, a proposal to eliminate the state’s gasoline tax with little to no vetting or debate, the Michigan Senate followed suit on Tuesday, passing the bill largely along party lines. Michigan LCV opposed this bill because the legislation would result in an estimated $750 million cut to the state’s road budget, and as proposed, it would not result in meaningful relief to Michigan families that need it.

The Legislature should expand Michigan’s earned income tax credit to ensure those hit hardest by price increases get the assistance they need without creating irresponsible budget shortfalls. Michigan cannot tax-cut our way out of this ongoing fossil fuel crisis; we must instead stop the weaponization of oil and gas by accelerating our transition to renewable energy resources. 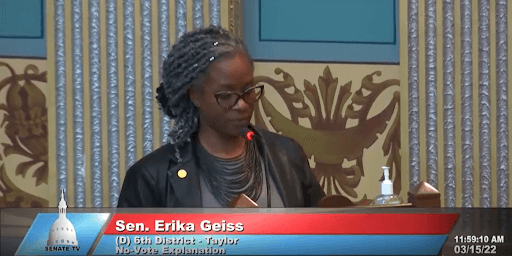 Sen. Erika Geiss (D – Taylor) giving a floor speech in opposition to HB 5570. “All of us here, I think, are looking for ways that would provide real relief to our residents as soon as possible, however, this farce of relief in House Bill No. 5570 is not it… These oil companies could provide real-time, real relief if they could suppress their inner Gordon Geckos and lower the damn prices that people are paying at the pump. But instead, they’re more apparently interested in [padding] their record profits.”

Michigan is currently faced with an opportunity to make transformational upgrades to our crumbling water infrastructure and act upon clean energy priorities. There are proposals pending before the legislature right now that can help lower Michigan’s reliance on fossil fuels and address this crisis, including:

The rapid and widespread adoption of clean and efficient energy is the only real way to diversify our power sources with domestic, home-grown energy. Doing so will reduce our vulnerability and reliance on globally priced fossil fuels and will immediately save Michiganders money on their energy bills.

Michigan LCV supports a gubernatorial veto of this legislation, and previous, structurally irresponsible tax cut legislation that together would cost the state some $2.5 billion annually.

On Tuesday, Michigan LCV’s State Government Affairs Fellow Tim Cohn offered public comments before the Michigan Department of Licensing and Regulatory Affairs (LARA) on proposed updates to the Michigan Energy Building Codes. These codes set the state’s requirements for both commercial and residential building energy efficiency. In his testimony, Tim spoke in favor of requirements for energy monitoring, electric vehicle readiness, and all electric buildings.

“At a time of global disruption and uncertainty impacting energy prices, it is more important than ever that Michigan increase our energy independence and shield residents from cost-volatility associated with fossil fuels by electrifying our buildings and ensuring they are efficient,” Tim said. “Right now, Michigan is in the midst of a broad effort to decarbonize our economy by 2050 — adopting energy efficient, electrification-ready building codes is a major step towards achieving carbon neutrality.”

After more than a year of negotiations, AG Nessel and the Department of Environment, Great Lakes and Energy (EGLE) announced a settlement with the Arbor Hills Landfill in Salem Twp. AG Nessel’s lawsuit was initiated in October 2020 after it was revealed the landfill operators failed to comply with state and federal regulations regarding methane gas emissions and water pollution.

The $2.3 million settlement includes requirements to resolve the issues at the landfill. Under the agreement, Arbor Hill Landfill must install monitors to detect methane gas emissions, identify and reduce the source of the emissions, implement remediation measures to minimize groundwater contamination, and conduct regular testing of the site for continued compliance. Also included in the settlement are provisions to operate a free hazardous waste disposal site for ten years and the planting of trees in the area to reduce odor. By brokering this settlement agreement, AG Nessel has ensured Salem Twp. residents will no longer be subject to harmful air and groundwater pollution, which could pose a serious hazard to public health.

You can read more about AG Nessel’s victory on Michigan LCV’s How Green is Your Attorney General webpage. 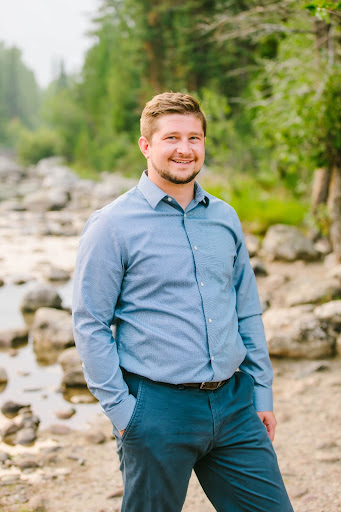 Trent Wolf works as a legislative director to Rep. Abraham Aiyash (D-Hamtramck). He has supported Rep. Aiyash’s efforts to institute a statewide moratorium on water shut offs, increase the percentage of low-income energy assistance dollars that goes towards weatherization, and adopt community solar policies. Trent’s work on these issues helps advance clean energy, air and water for all Michiganders. We are lucky to have him as an advocate for conservation issues in Lansing!

Q: What environmental issues do you think are most important statewide?

“Strengthening the reliability of our statewide electric grid, lowering the cost of household electricity, and building upon our commitment to renewable energy are vital to Michigan’s future. Michigan households pay nearly 25% more than the national average for electricity, while also having one of the least reliable electric grids in the country. Delivering historic investments to update our energy infrastructure as well as enacting strong consumer protections that hold investor owned utility companies accountable are central to ensuring that working families and businesses can prosper.”

Q: What environmental issue are you most proud of working on?

“I am most proud of Rep. Aiyash’s House Bill 4777, the Protecting Overburdened Communities Act. We introduced this legislation last year after a version of it was successfully passed and signed into law in New Jersey in 2020. This legislation would provide residents in communities overburdened with pollution a stronger voice in the decision making process for approving permit applications and provides the state of Michigan with the authority to protect the health and wellbeing of residents from polluters.”