Last Thursday, the Michigan Public Service Commission approved a settlement between Consumers Energy, Attorney General Nessel, and environmental advocates that positions the company to be a national leader in clean energy over the next decade. The settlement was reached under Consumers’ most recently filed Integrated Resource Plan (IRP), a legally required description of which energy resources Michigan utilities plan to use over the course of the next five years.

Since Consumers Energy first filed their Integrated Resource Plan last June, a broad coalition of clean energy advocates, frontline organizations, and local businesses have tirelessly worked to organize members of the public to pressure Consumers to move towards a clean energy future. Over the course of the past year, 4,500 individuals submitted comments on the IRP to both the Public Service Commission and Consumers Energy itself.

As a result of the surge of public interest in lower cost clean energy, Consumers’ has agreed to: 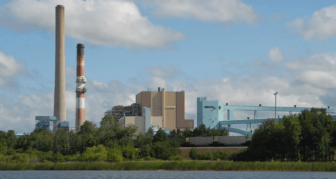 As a result of Consumers’ IRP, the company will close its two remaining coal units at the J.H. Campbell generating plant by 2025. Photo Credit: Detroit News

Consumers Energy’s major shift towards clean, renewable energy is a critical step forward in reaching the carbon neutrality goals set out in Governor Whitmer’s MI Healthy Climate Plan. Additionally, transitioning to clean energy and retiring aging fossil fuel plants is expected to help lower energy costs for ratepayers – an essential move, as Michiganders face the highest energy costs in the Midwest for the second worst reliability in the nation.

With this victory now secured, clean energy advocates are now looking at DTE, who is the only major Michigan utility that has not moved beyond coal and who will file their IRP sometime next year.

“What Problem Are We Trying to Solve Here?” – Rep. Julie Alexander

Last Tuesday, the House Committee on Local Government heard testimony on a series of hotly contested bills that would rewrite Michigan’s aggregate mining laws and shift oversight authority from local governments to the state of Michigan. The hearing drew dozens of people, including representatives from the aggregate industry, unionized labor, environmental organizations, local government, and concerned citizens. 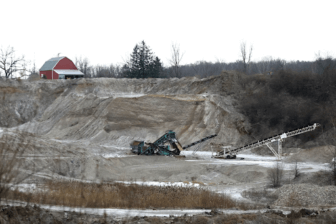 Senate Bill 429- 431, would remove local control over aggregate mining legislation in favor of establishing a state regulatory regime within the Department of Environment, Great Lakes, and Energy. The bills are sponsored by Sen. Jim Ananich (D – Flint) and are widely supported by the aggregates industry, the Michigan Chamber of Commerce, and some labor unions.

Rep. Alexander (R – Hanover) repeatedly asked those testifying and her fellow lawmakers to answer the foundational question of ‘what problem are we trying to solve’?  It is THE most important question, and the answer proponents have repeatedly offered is that the state is running out of key aggregate materials to build its roads and bridges, and without access to more virgin aggregate materials road construction costs will soar. 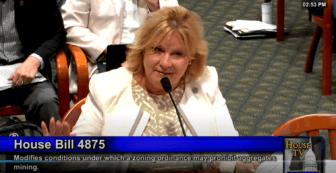 Rep. Julie Alexander gives testimony on HB 4875. During Tuesday’s hearing, she repeatedly asked a critical question: “What problem are we trying to solve?”

Yet, on Tuesday during the hearing there was no serious discussion of industry wide supply and demand data; no exploration of supply chain issues nor demand side solutions to reduce the need for aggregate materials.

No policies were researched, explored, or offered in the bills to incentivize aggregate material recycling or material substitutes; nor even any proposals or requests to research any of these topics.

More, none of the bills presented Tuesday included policy solutions that would guarantee environmental protections for scientifically informed and ecologically friendly reclamation standards, soil conservation, and the delineation of aggregate materials and natural spaces that should not be mined in the first place.

Stay tuned for next week’s version of the Capital Catch Up, where we will discuss some key policy specifics that would constitute a robust aggregate regulatory environmental regime!

Last Wednesday, the Department of Natural Resources held a public hearing on a proposed expansion of the Camp Grayling National Guard training ground that drew hundreds of citizens concerned about potential environmental ramifications from the expansion. The hearing was not made available to those interested in participating virtually.

The proposal would almost double the size of the camp, which is already the largest National Guard training center in the United States, and would extend the camp’s boundaries towards the shores of Lake Houghton, a popular recreation and tourism destination; Kirtland’s National Wildlife Refuge, a critical site devoted to the rehabilitation of the recently-endangered Kirtland’s warbler; and additional tributaries of the Au Sable River, a popular fishing and recreation site.

According to Col. Scott Myers, current director of Camp Grayling, the large expansion will only see minimal military activity and will primarily be used to upgrade the camp’s capabilities to practice cyber and electronic warfare, such as the jamming of GPS signals, or the tracking — or prevention of tracking — of troops using their cellular or other electronic signals. 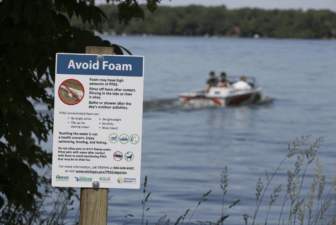 However, the size of the expansion raises serious concerns. One, among others, is that once the lease is signed, the Guard will expand its practices to include more impactful activities. Current impacts from military activities at the camp include: PFAS contamination at nearby Lake Margrethe and home drinking water wells, loud artillery blasts that frighten wildlife, and forest destruction.

According to Tom Barnes, the DNR’s Grayling Forestry Unit Manager, last Wednesday’s hearing was “step one of a thousand” in the proposal’s approval process. Additionally, the Department recently extended the deadline for public comment from July 8th to a rolling public comment process throughout the course of the review. To view the proposed changes and submit your own public comment, visit the DNR’s website.