Sally Peterson is an avid runner and has trained for six marathons along the Huron River and through the Ann Arbor Parks systems. She has run thousands of miles in and around Ann Arbor during the 22 years she has lived there, which has given her great appreciation for the role the Huron River plays as a critical water source and recreational destination. Growing up, her family spent the month of July on Lake Winnipesaukee in NH. Thus, her appreciation for the “water economy” is deeply rooted and fuels her passion in her current role as executive policy advisor for economic development to the Ann Arbor city administrator. She leads a strategic economic development team that focuses on redevelopment opportunities along the east side of the North Main Street corridor that would activate the riverfront and improve the view shed.

Peterson’s husband is Tim, co-founder and managing partner at Arboretum Ventures. They have two children. Jack (22),  is a recent graduate of Lehigh University, where he was a two-year co-Captain of the tennis team. He recently moved to Manhattan and works for the Money Management Institute. Their daughter Jane (20) is a junior at Williams College, majoring in political economy. She is also a managing editor of The Williams Record. 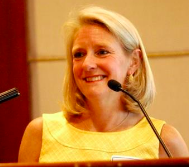