West Coast Heat Wave: California is in the midst of one of the worst heat waves in modern history with high heat causing deadly wildfires and fears of rolling blackouts due to excess strain on the energy grid. Similar to the deadly heat seen in China, temperatures in some parts of the state have soared to 110 degrees Fahrenheit in the latest example of the impacts of climate change. 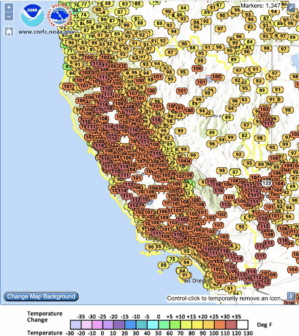 A heat map of record-breaking temperatures seen across California this week (Credit: @US_Stormwatch via Twitter)

Biden Attending Detroit Auto Show: President Joe Biden announced he plans to attend the North American International Auto Show in Detroit this month. As a self-proclaimed “car guy,” the president’s visit to the Motor City could build momentum for increased electric vehicle manufacturing as the auto industry shifts toward EVs.

Lawmakers and Advocates Push for Environmental Justice: 60 lawmakers from both the U.S. House and Senate (including Michigan Representatives Tlaib, Dingell, and Lawrence) wrote a letter to the Biden Administration with strong recommendations on implementing the Biden Administration’s Justice40 Initiative in order to accomplish Biden’s climate, environmental justice, and equity goals. In related news, LCV joined a press release with the Equitable & Just National Climate Forum opposing a fossil fuel permitting proposal (the “Manchin side deal”) and calling for the passage of the Environmental Justice for All Act.

“Car guy” President Joe Biden is probably super excited to be attending the Detroit Auto Show next week – and not just to ooh and ahh over the latest vehicles. The President must also be pretty eager to take a victory lap (to use a car-related phrase) to tout his accomplishments in a pivotal swing state.

And why shouldn’t he feel good about a trip back to the Motor City? There is a sense of momentum after being able to deliver on signature initiatives (even with razor thin margins in Congress), his poll numbers are ticking up, and there are plenty of positive headlines about the benefits of the recently-passed Inflation Reduction Act, including the recent news that clean energy projects are surging in the wake of the bill’s enactment. 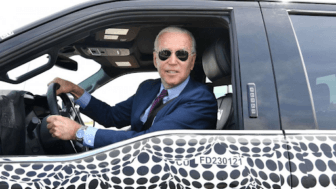 The President and many other stakeholders will be spending the next weeks and months educating and unpacking the Inflation Reduction Act’s many provisions and hundreds of billions of dollars of benefits. That is important work – but just as important is the work to continue to draw down greenhouse gas emissions beyond what the new law can accomplish.

Modeling and early analyses project that the Inflation Reduction Act could reduce U.S. greenhouse gas emissions up to 40% in the year 2030 (compared to 2005 levels) – which is huge compared to the status quo. However, 40% is the upper range of projections, and the consensus of the world’s climate scientists demand that emissions be slashed at least 50% by 2030. That leaves no other choice but to implement the Inflation Reduction Act as effectively as possible and pursue many other measures to stave off runaway warming that could leave our planet uninhabitable in the future – we must walk and chew gum at the same time.

Fortunately, we have a lot of options at our disposal. As a new report called “Climate Corporate Crackdown” from the Revolving Door Project lays out, the Biden Administration can build on their executive actions so far by pursuing a wide range of policy options available under existing authority – a more holistic, all-hands-on-deck approach that would supplement and enhance the impact of the IRA.

Of course Michigan LCV and many others are highlighting the critical importance of state and local climate action as part of this whole-of-government approach. For example, Governor Whitmer just made two major announcements today – an Executive Directive to create jobs by taking advantage of the resources in the IRA and a $375 million investment from Hemlock Semiconductor, a Michigan manufacturer of polysilicon (essential for the solar panel). On the local front, check out this local Ann Arbor climate millage on the ballot this year.

Michigan LCV will continue to advance solutions to pollution at all levels – stay locked in to our newsletters for exciting developments in this space.

After ignoring Gov. Whitmer’s shutdown order of the Line 5 pipeline last spring, Enbridge Energy – the Canadian company that owns and operates the pipeline running under the Straits of Mackinac – has continued to operate the pipeline illegally, leading to numerous legal battles between Enbridge and the State of Michigan.

Despite Line 5 representing the single greatest threat to the health of the Great Lakes and our way of life in Michigan, Enbridge’s proposed solution to maintain the 70-year-old pipeline and safeguard against an oil spill is to build a tunnel that would house the pipeline and keep their oil (and profits) flowing. 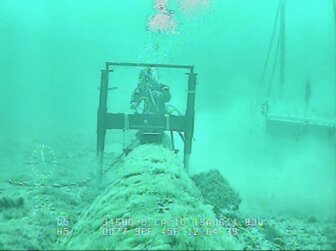 As legal proceedings continue, the U.S. Army Corps of Engineers is gathering public input on the proposed tunnel and the future of Line 5 as part of its environmental review process. After holding a virtual hearing last week, the Army Corps is holding an in-person hearing tomorrow in St. Ignace for the public to give input as the scope of the study is determined. You can RSVP to attend the hearing here.

The Army Corps is holding another virtual hearing on October 6th, and is also accepting written comments through October 14. If you cannot make it to tomorrow’s hearing, you can submit a written comment here.

With Line 5 pumping oil through one of the most ecologically sensitive areas in the world, we cannot allow the construction of a climate-killing tunnel that would keep the 70-year-old pipeline open and fossil fuels burning for years to come.