Devastation in Puerto Rico: Hurricane Fiona made landfall on the southwest coast of Puerto Rico Sunday morning, devastating the island with high winds and record-breaking rainfall that ripped apart roads and bridges, knocked out power for the entire island, and made clean drinking water inaccessible. Puerto Rico was still recovering from Hurricane Maria, a Category 4 storm that destroyed the U.S. territory’s power grid and caused more than 3,000 deaths in September 2017.

Climate Alliance Progress: Recently, the U.S. Climate Alliance (USCAN) released its annual report, which shows some promising progress at the state level in the fight against the climate crisis. According to the report, states that are members of the Alliance – including Michigan – are outperforming the rest of the country in terms of reducing emissions, saving energy, building climate resilience, and creating clean energy jobs. Read the full report here. 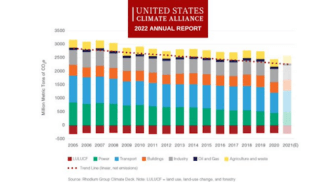 The report highlights the importance and potential of state-level climate action in the fight against climate change (Credit: U.S. Climate Alliance).

Senate Vote On HFCs: Senate Majority Leader Chuck Schumer indicated that the Senate will vote this week on the Montreal Protocol climate treaty’s Kigali Amendment, which would set the U.S. on track to phase out the use of hydrofluorocarbons (HFCs). According to the EPA, phasing out the use of HFCs – industrial chemicals commonly found in products such as air conditioners, refrigerators, insulating foams and pharmaceutical inhalers – could reduce the warming of global temperatures by 0.5 degrees Celsius by the end of the century.

Disaster has struck the island of Puerto Rico, a dependent territory of the United States, just five years after Hurricane Maria killed 2,975 people. This time intense flooding and another hurricane has left over 80% of the island’s population without power. Hurricane Fiona made landfall September 18 as a category one hurricane, which was considerably weaker than Hurricane Maria that landed as a category four hurricane. 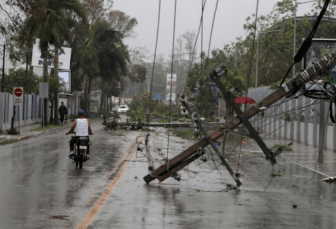 Hurricane Fiona knocked out power for the entire island of Puerto Rico after it made landfall Sunday (Photo Credit: @ajplus via Twitter).

Failure to disburse Hurricane Maria relief funds, an undemocratic governmental advisory board, and privatization of the country’s electric grid have left the island devastated from a storm the island should be able to weather.

Puerto Rico is a victim of Wall Street speculation and disbursement of subprime loans that left the island straddled with debt it was never going to be able to pay back. As a result of the debt crisis Congress passed the Puerto Rico Oversight Management and Economic Stability Act (PROMESA) in which an unelected board of governors has been given executive authority to make budget decisions against the will of the people. Not dissimilar to emergency management practices residents in Michigan have faced, the board of governors has prioritized repayment to Wall Street investors while cutting social services and selling off public assets to private entities.

In the aftermath of Hurricane Maria the country’s public electric grid was sold to LUMA, an American-Canadian energy company. Just before Hurricane Fiona hit, massive protests were held against the company which has been unable to provide reliable service as the island has faced rolling blackouts and expensive rates (sound familiar?). To date, of the $13.2 billion dollars designated by FEMA for rebuilding the island’s electric grid after Hurricane Maria, only $40 million has been dispersed as Wall Street has been engaged in protracted legal battles to snatch federal relief money for repayment of debt over servicing the needs of the people.

The relationship between the United State’s federal government and Puerto Rico has been described by residents as colonialism. Solutions exist to Puerto Rico’s persistent problems such as passing the Territorial Relief Act, but without any voting representation in Congress, Puerto Rico’s fate is out of the hands of its residents.

Join the Michigan LCV team at the Gem Theatre in Detroit on Thursday, September 29 for our 10th annual gala as we recognize and celebrate the people making real change to protect Michigan’s land, air, water, public health, and democracy. 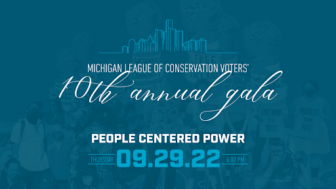 This year, the Michigan LCV team will be honoring two outstanding individuals and two incredible partner organizations for their work to move the needle on issues facing our land, air, water, public health and democracy in Michigan.

You can purchase tickets here. We hope you will join us!