From the steps of the Capitol in Washington, D.C. to our beautiful Great Lakes state, the Washington Weekly is your weekly update on federal climate news curated by Michigan LCV with expert analysis on what it all means for Michigan.

Climate Celebration: On Tuesday, President Biden hosted a celebration of the passage of the Inflation Reduction Act at the White House. The event included remarks from the president and a musical performance from James Taylor as thousands of people from across the country gathered to celebrate the historic legislation that will help reduce energy and prescription drug costs for families and address the climate crisis. 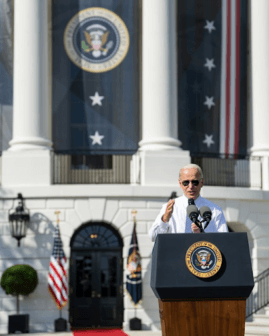 Inflation Reduction Act Resources: In tandem with Tuesday’s celebration, the Biden administration also unveiled new resources to help Americans understand the benefits of the IRA. The new Clean Energy For All website contains information on how to take advantage of the IRA’s tax breaks and clean energy benefits, money saving tips, and resources that explain how tax credits work for various occupations and family situations.

More than 70 House Democrats including Michigan Representatives Rashida Tlaib, Andy Levin and Debbie Dingell have called on House leadership to separate a dangerous “permitting reform” bill from the must pass government funding bill. Leadership is attaching the poison pill  to the funding package in order to force reluctant climate-conscious House members to vote yes or be responsible for shutting down the government. The bill would drastically scale back environmental review processes allowing for expedited fossil fuel project development. 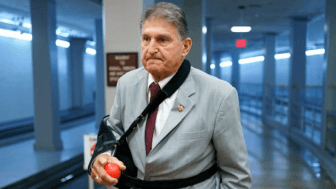 The deal was part of an agreement between Senator Manchin, Speaker Pelosi and Leader Schumer in order to secure Sen. Manchin’s vote for the Inflation Reduction Act. However, as the United Nations and the International Energy Agency have made clear, the world cannot afford any new fossil fuel infrastructure if it is to avoid the dangerous tipping point that will cause catastrophic climate change. Even expending current fossil fuel reserves puts the world over the tipping point.

Senator Manchin admitted to reporters that this bill is something Republicans have wanted to get done for years, yet the Democrats are on track to deliver this long term goal that would have devastating consequences. That has not stopped the GOP from seeking even more concessions in their own permitting reform bill released by Senator Capito (R-WV) that would all but eliminate the concept of public lands and allow states to open them to drilling as they see fit.

The government funding deadline is September 30 and it is unclear if Speaker Pelosi will heed  to the demands of her caucus in calling for a stand alone vote.

Along with other members of LCV affiliates from across the country, Michigan LCV executive director Lisa Wozniak traveled to D.C. this week to take part in Tuesday’s Inflation Reduction Act celebration! 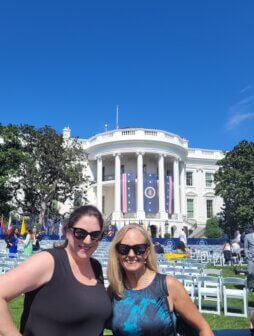 Lisa at the White House on Tuesday with Michigan LCV board member Kerry Duggan!

Lisa being invited to the White House celebration is a testament to Michigan LCV’s work over the last two years to build support for federal climate, jobs, and justice legislation. The Conservation Voters Movement (all the LCV affiliates around the country) deployed an intense all-hands-on-deck effort to demand climate action from Congress and the federal government, recognizing the grim political reality that we may only have a slim window of opportunity to rapidly reduce emissions and prepare for the climate future. 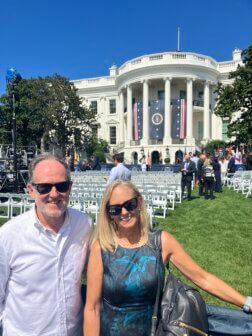 Lisa with Greg Moga, a member of the League of Conservation board of directors!

Michigan LCV  federal climate action a core pillar of our work, and the path to passage of the Inflation Reduction Act was a wild up-and-down ride. In order to build momentum for future action, it’s critical to recognize the historic moment and show that action on climate change is a politically winning issue. We are thankful to be standing shoulder-to-shoulder with many partners on this journey and we feel proud that our team has made a difference over the last two years and beyond.