Pakistan Under Water: A “monsoon on steroids” has hammered Pakistan in recent days, killing more than 1,100 people and displacing at least 33 million more. As parts of the country are experiencing 500% more rainfall than average, the flooding Indus River has turned part of Sindh Province into a massive inland lake more than 100 kilometers wide, showing the world once again the catastrophic consequences of the climate crisis. 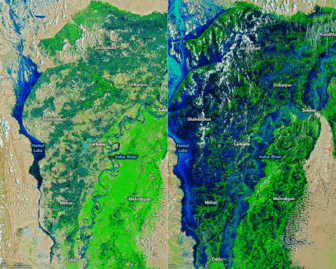 Satellite images from August 8 (left) and August 28 (right) show the mind blowing scale of the flooding in Pakistan (Credit: @jscarto via Twitter).

Jackson Water Crisis: A state of emergency has been declared after the main water treatment facility in Jackson, MS failed earlier this week, leaving residents without clean, safe running water at home to drink, cook, or bathe. The city has been under a “boil water” advisory since June. Now, the water is so contaminated that even boiling it doesn’t make it safe to use, closing schools, rendering air conditioning inoperable in hospitals, and leaving families helpless.

PFAS Designation: Last Friday, the U.S. Environmental Protection Agency (EPA) proposed a reclassification of PFOA and PFOS – the two best-known PFAS “forever chemicals” – as hazardous under the Comprehensive Environmental Response, Compensation, and Liability Act of 1980 (CERCLA). By reclassifying these PFAS chemicals under the Superfund law, regulators would have the ability to recover cleanup costs from polluters, instead of the cost of cleanup falling on those impacted. As Great Lakes PFAS Action Network (GLPAN) co-chair Tony Spaniola said, the proposal is a “watershed moment” for “communities that have suffered for far too long.”

How Can the Inflation Reduction Act Lower My Energy Costs?

The Inflation Reduction Act (IRA) has been cited by experts as a way to relieve the burden of high energy costs for consumers. So how can this reduce your bill?

According to a widely circulated study, the IRA could lower energy costs by $1,800 annually by allowing consumers to take advantage of rebates and tax credits. The study notes that consumers have to “install a modern electric heat pump to replace their furnace, a heat pump for water heating, and convert to an electric vehicle and [Install] rooftop solar,” to take full advantage of the savings. Despite the upfront cost, the potential savings made possible by these rebates are an opportunity for more consumers to modernize their homes with electric and solar.

Additionally, consumer rebates spelled out in the IRA are broken down by household income. Low income households qualify for rebates of up to $8,000 for a heat pump furnace replacement, $1,750 for a heat pump water heater, $840 for an electric stove and $840 for an electric clothes dryer. Moderate income households can receive rebates for 50% of these costs. Households above income thresholds can deduct 30% of the costs from their taxes limited to $1,200 per year and $600 per item. 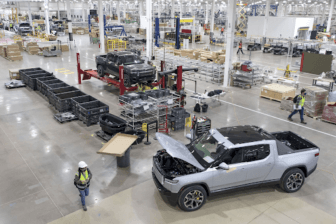 Finally, the Inflation Reduction Act will spur massive clean energy deployment at the utility scale and help lower costs for consumers. Consumer savings, however, will hinge on whether entities like the Michigan Public Service Commission hold private utilities like DTE and Consumers accountable. Clean energy is cheaper than fossil fuels and not subject to volatile price swings, but private utilities will continue to play a large role in setting rates as long as they are allowed to. Despite being cheaper, rates could remain high unless regulatory bodies crack down on private utilities and force their hand to implement clean energy solutions.

Last week Congresswoman Rashida Tlaib, Congresswoman Debbie Dingell and Congressman Ro Khanna of California, the Chair of the House Oversight Subcommittee on the Environment, held a public field hearing on the eastside of Detroit to discuss the gaps in laws and regulations that leave frontline communities vulnerable to pollution and what must be done to safeguard public health and the environment. 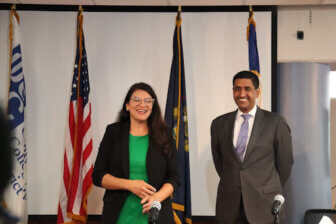 Residents impacted by air pollution from toxic facilities like U.S Ecology and the Stellantis plant near the Beniteau Neighborhood testified to the burdens and health problems they faced. Policy and public health experts also testified for the need for more stringent EPA and EGLE standards for air pollutants that not only hold polluters accountable, but prioritize impacted communities as well. 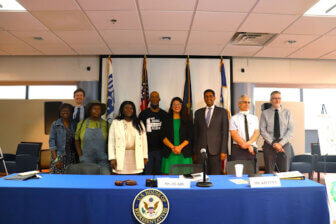 Rep. Tlaib and Rep. Khanna with the witnesses that testified at last Thursday’s field hearing.

Check out our Twitter thread covering the hearing here. 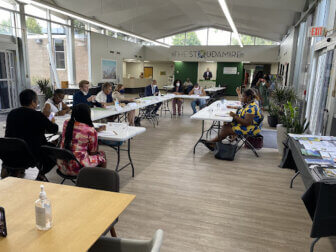 The panel took place at the Eastside Community Network in Detroit, an area that faces high levels of pollution from industry.

The overwhelming sentiment emphasized by participants was the lack of community engagement in regulatory processes dealing with toxic substances. Participants also raised that cumulative impacts were not being taken into account – currently, if pollution from an industrial center combines with traffic pollution to create hazardous air quality, only industrial pollution is regulated. 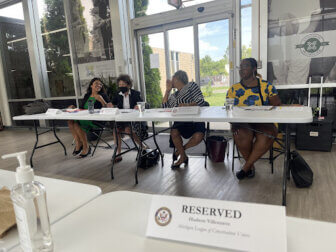 In addressing environmental injustices and the climate crisis, participants agreed that we must create equitable solutions and systems that account for the lived experience of frontline communities and prioritize impacted communities over corporate profit.