I’ll be blunt – time is running out for the 117th United States Congress to take meaningful action on climate change to avoid an unlivable planet.

On one hand, Congress is as close as they’ve ever been to enacting a climate law that can reasonably be expected to draw down greenhouse gas emissions. President Biden and the leadership in both the House and Senate are committed to enacting a law that will put climate action, jobs, and environmental justice at the center. A fairly comprehensive bill even passed the House in 2021 through the critical “budget reconciliation” process.

Unfortunately, close doesn’t count when it comes to climate legislation. With a climate law within reach, advocates are tearing out what little hair they have left after reading public comments from Senator Joe Manchin this week.

Senator Manchin reported out that he is initiating bipartisan talks aimed at finding agreement on a climate and energy bill, and that these talks are “just starting” after one meeting. Manchin’s friendly approach with Republicans may play well for his political identity in red state West Virginia, but these talks may spell disaster for the prospects of a budget reconciliation bill that actually moves the needle on clean energy and carbon reductions.

To be clear, Senator Manchin is not ruling out climate policy being part of a reconciliation bill that could earn his support – he said that climate would be a “big factor” as Democrats assemble party-line legislation that would only require a simple majority in the Senate. But negotiating climate change bills with today’s Senate Republicans is like trying to grow cherries in a desert – it’s a fruitless endeavor. The GOP is explicit in their opposition to policies that will address this crisis at the scale that is necessary – and besides, they do not want to hand Democrats any sort of major political achievement.

When one considers this latest move alongside Senator Manchin’s extensive record of delay, distraction, denial, and derailment on behalf of the fossil fuel industry – it’s more than fair to question whether this is just yet another tactic to undermine strong climate action and run out the clock this year.

You may be asking yourself “OK, but what do we do about all this? We need Senator Manchin’s vote to get anything.” It is true that we need his vote, which is why we need the President and Congressional leaders to truly make this an “all-hands-on-deck” moment. Congressional leaders must use every tool at their disposal to make sure that every Democratic U.S. Senator votes for a climate-centric reconciliation bill –  which is likely the only outcome that has a chance to literally save the world.

The tactics to win votes from Senators Manchin, Sinema, and any other reluctant Senators have not been exhausted. There is still time, but not much – the political window could very well close for years after the end of this year and the new 118th Congress takes over in 2023. As voters and citizens of the world, we must all create the broad-based, loud demand for exhausting every action. Message and call your Senator, organize with other groups and individuals calling for climate action, and support candidates that are making climate change a top priority.

Scientists around the world have been pounding the “emergency” button for years – our federal elected officials must not waste these last few seconds on the clock to rapidly cut greenhouse gas emissions.

Last week, the Michigan LCV team celebrated a big milestone in state-level climate action as Gov. Gretchen Whitmer unveiled the final version of her MI Healthy Climate Plan! After being announced in 2020 – and after a months-long draft and revision process informed by public input – we were excited to join the Governor and climate leaders in Traverse City for the official release. You can watch our video about last Thursday’s MI Healthy Climate Plan launch here. 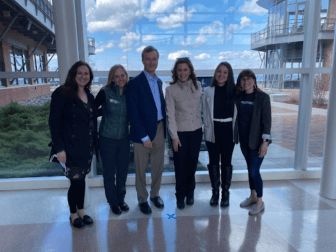 The Michigan LCV team in Traverse City with Gov. Whitmer

The final MI Healthy Climate Plan provides a roadmap for Michigan to achieve 100% carbon neutrality by 2050 to protect our air, land, water, and the health of our communities well into the future. Some of the pillars of the Plan include closing all coal plants in Michigan and get to 60% reliance on clean energy by 2030, a holistic and equitable transition to renewable energy that will create jobs and bolster our economy, and doubling down on charging infrastructure for electric vehicles, all of which will help make Michigan a leader on climate action.

With the final version now in place, the focus now shifts to implementation of the Plan’s clean energy and climate solutions.

Running parallel to the release of the Plan, our team took part in the first-ever Oakland County Climate March on Saturday in Royal Oak! 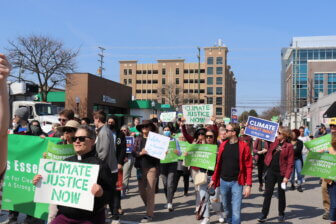 The day was made better by beautiful weather and nearly 500 people turned out for the event that included a fair with dozens of climate action-focused booths, a parade through the city, and local elected officials speaking about the importance of local action to address the climate crisis. We’re looking forward to more events like this as the weather continues to get better throughout the summer!